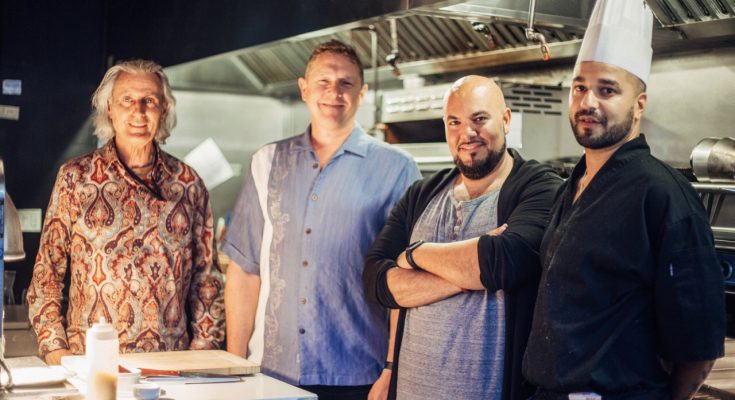 (EXPERIENCE MAGAZINE) — Santa Monica, CA — Monday, May 21st, 2018 — There’s a hot new French restaurant that’s in Santa Monica called AIR:FOOD. This is a gourmet casual restaurant that serves everything from sandwiches to foie gras. The Experience Magazine had the honor of dining on a sampling menu with a wine paring. The food is on another level and served with a flair. The open air kitchen that Chef Thierry Babet commands sits in the middle of the restaurant and allows the food to be served quickly to hungry guests. People who know about AIR:FOOD come ready to dine on five star French cuisine.

Owner Marc Moubarak and Chef Thierry Babet have brought high-end Paris style bistro dining to Los Angeles. Marc explained that it’s their goal to present French classics at AIR:FOOD but to rework them a bit. I’ve been to Paris recently and I can say that they have achieved this.

The food that is created at AIR:FOOD is exemplary. First of all, the food is presented in a beautiful way that is camera ready. We live in an age when everyone is posting photos of their food on Instagram, Snapchat and Facebook. AIR:FOOD is creating gorgeous food that tastes as good as it looks.

One of the things that most people don’t know about AIR:FOOD is that they have a fully stocked water bar. This is the first of its kind in Los Angeles. It features 55 different kinds of water. They have Antipodes, Voss, Sole, Bling, Abatilles, Fiji, and Chateldon 1650. These are just a few of the brands we saw. One brand of water called Berg claims to have a source that is completely inaccessible to man. The source is actually an iceberg and not until giant chunks of the iceberg fall off can the water be harvested and bottled. Artisanal drinking water is new for me. Marc  recommended that we try the award winning Antipodes from New Zealand. It was a good recommendation. This sparkling water has less sodium than commercial sparkling water. The taste is light and pure. We also sampled a black water called “blk.” I had never tried a black water before. I have to say that the taste is very good. There’s a hint of minerals in the aftertaste but it’s not overwhelming. This is a premium alkaline spring water from Canada and the black color is natural. The water bar at AIR:FOOD is really cool. It’s worth checking out. I should mention, that Chatledon 1650 is available at AIR:FOOD. This is the Dom Perignon of French sparkling waters. Available since the year 1650, this is the oldest bottled water company in the world. Only 700,000 bottles of the Chatledon 1650 are made each year.
The first starter we got to sample was the Scallops. Served with a parsnip cream sauce and a delicate piece of crispy rice.  This dish looked delicious and tasted incredible. I should mention that each item was served with a “bon appetite.” This meal was fine French dining. The kind of meal that I travelled to Paris to have. But this is on another level.
The lay out of the open air kitchen at AIR:FOOD features a live video feed so you can watch your food being prepared. Chef Thierry and his staff really take time to assemble a beautiful offering. The first wine of the night was a Chablis. We tried a 2017 Domaine Gueguen. This wine has a rich flavor with a hint of lemon. Marc paired this wine with a strawberry and tomato hors d’oeuvres called Le Tango that had a light maple syrup dressing. This was a delicious treat and the wine was perfectly paired. The Le Tango was so beautiful in its arrangement.
Next, we tried the Le Poulpe. This is a grilled octopus tail with lime, lemon and a touch of aioli. This was delicious. I’ve developed a love for octopus while traveling in Japan. I can tell you that this was fresh, grilled perfectly and just the right amount of aioli. I recommend the Le Poulpe. I love french seafood. It’s such a rare treat.

The wine that Marc recommended was a 2016 Monte Vallon Chardonnay. This wine is from Pays d’Oc in Southern France. This succulent wine has hints of peach and pineapple (I love pineapple). The flavor of this wine was incredible. So much different than the Chablis we had tried earlier. Chef Thierry Babet was expertly creating dish after dish.

Nothing prepared us for the vegan Tajin that we tried next. If you’re not familiar, a Tajin is a Moroccan stew that gets its name from the clay pot that it’s slowly cooked in. Chef Thierry had prepared a beautiful vegan Taijin with a savory broth. Served with a side of rice, we mixed the rice, the vegetables and the broth together on our plates.
Our next wine paring featured a Orobello Chardonnay from California.  I wrote down in my notes – “this wine is incredible.” Really, the pairings were carefully and perfectly put together. I can’t remember another wine pairing where the flavor of the wine went so well with the cuisine. The Orobello was paired with a cod that was smoked with oak wood. It was light and flakey. This entree was the main show. Chef Thierry had created beautiful Instagram ready offerings all night. The smoked Cod was at the heart of this incredible meal. Yes it was light, fresh and flaky, but the flavors were pure and crisp. I wanted to eat every bit of the serving. The blend of flavors were at a master level. Chef Thierry can show off a bit with his knowledge of fine French cooking. You have to try it. It’s amazing.

Along with the smoked cod, we got try a small side of au gratin potatoes. I mentioned to Mark that these au gratin potatoes taste exactly like the ones my mom used to make. Mark smiled and said that they had put the au gratin potatoes on the menu because their moms had made them. This is French comfort food at its finest. I recommend that you try this side.

The after dinner apéritif was just a perfect ending to our meal. We really enjoyed our dinner so much. For dessert, Chef prepared a wonderfully creative treat. The first was a candied cream puff topped with whipped cream. The second was strawberries and raspberries in a Sabaillon Creme Brûlée that was made with marsala wine. Wow! This is a rare treat. I’ve never had anything like this in Los Angeles before. Simply amazing.
AIR:FOOD  is a gourmet casual dining spot that’s near the ocean and the Third Street Promenade. They have raised the bar for gourmet French food and casual lunches on the Third Street Promenade and Los Angeles. Stop by for an amazing dinner or swing by for lunch. The Experience Magazine highly recommends AIR:FOOD.
Check out the website for AIR:FOOD here.