The Los Angeles LUCKYRICE Feast presented by Bombay Sapphire EAST will take place on July 29 from 7 – 10pm. You never know what to expect with LA’s dynamic culinary scene, and this year we are moving our Feast to DTLA, a new epicenter of culinary innovation, to showcase the best of the city’s Asian and Asian-influenced chefs and mixos. The City of Angels is home to some of the world’s most diverse ethnic populations – and, subsequently, one of the most authentic “fusion” culinary scenes that are a natural outgrowth of Latino and Asian communities living, working and eating side-by-side.

Hosted by the cooler-than-thou Seoul Sausage trio, this Feast will be populated by over 30 of the area’s top Asia-minded culinary heroes — from favorite LA mainstays to new pop-ups ready for you to discover. The chef line-up spotlights some of the hottest restaurants in town (many who will be participating in the LUCKYRICE Feast for the first time), including: Open Blue, Asian Box, Seoul Sausage, Ayara Thai Cuisine, Phorage, Starry Kitchen, Komodo, Crème Caramel, Hinoki & the Bird, JINYA Ramen Bar, Katsuya, Twenty Eight, Blue Ribbon Sushi and Grill, Hanjip, Fluff Ice, Parks BBQ, Bling Bling Dumpling, Jet Tila, and Genghis Cohen. In addition, we’ll be serving up dozens of cocktails, beer and other beverages. 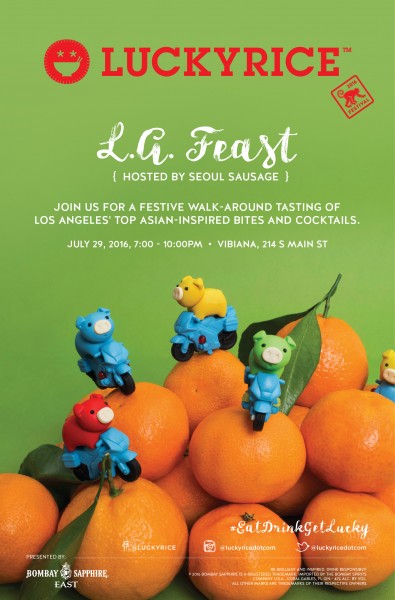 ABOUT LUCKYRICE
From our home base in downtown Manhattan, the LUCKYRICE Festival works with hundreds of chefs and restaurants as well as corporate and culinary partners to bring the diverse worlds of Asian culinary culture to global-minded North American consumers.