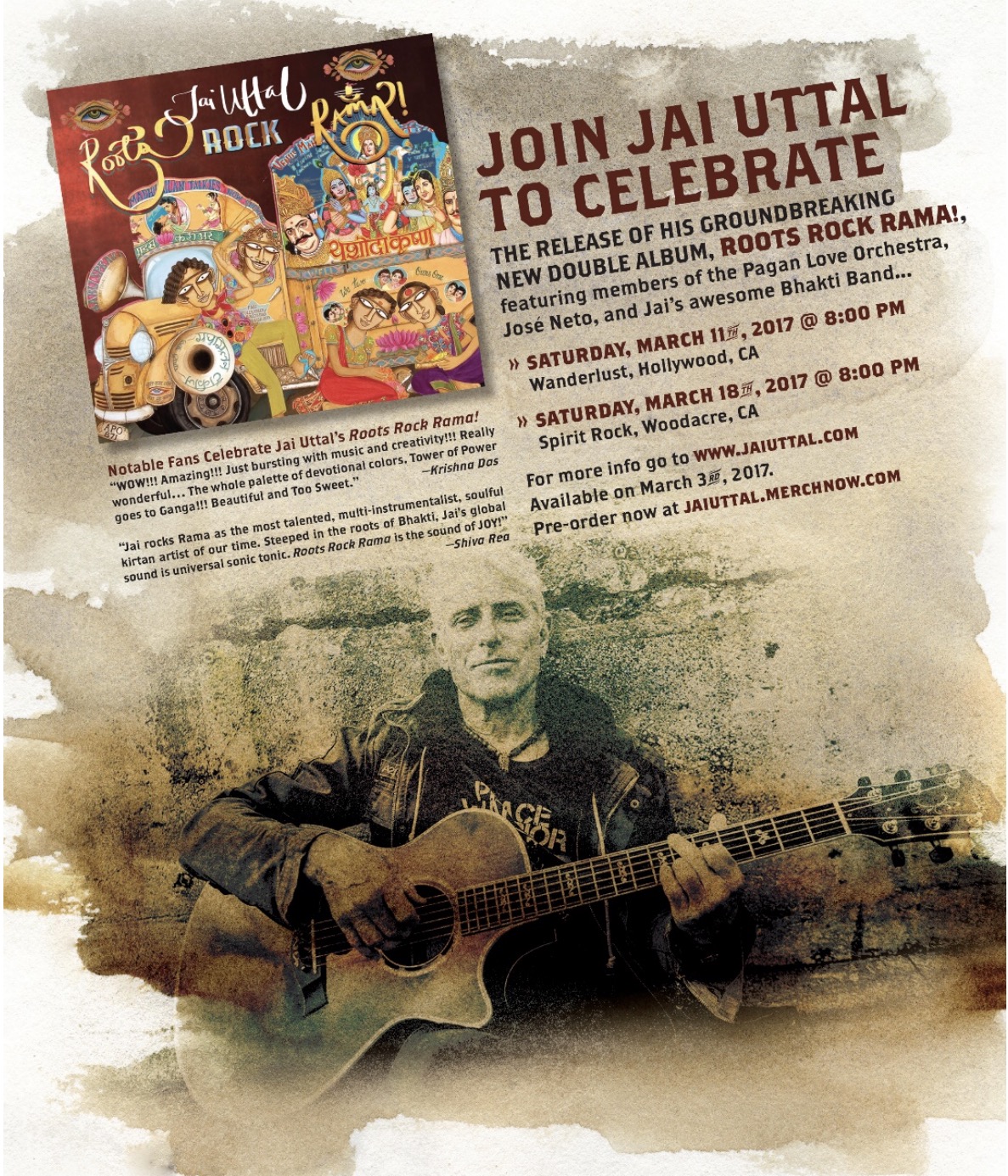 Los Angeles, CA – February 8, 2017 – Grammy nominated spiritual music pioneer Jai Uttal will perform at Hollywood’s noted yoga and events space Wanderlust, 1357 Highland Ave, Los Angeles, CA 90028, at 8pm on March 11 to hail the release of Jai’s 19thalbum Roots! Rock! Rama!. Celebration, meditation, dance of the devas, and love song to the universe, this event is all of that and more. Tickets are $30 in advance here. 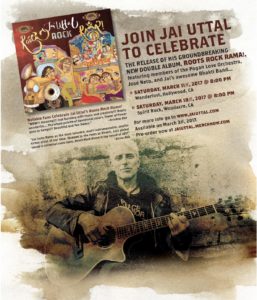 Jai will be joined by members of his Bhakti Band Dave Allen on drums, Steve Postell(David Crosby, Jennifer Warnes, John Oates, Dave Koz, many more) on electric guitar, Mark Gorman on bass, and Tina Malia(Kenny Loggins, India.Arie, Bonnie Raitt, Bassnectar, Deva Premal and Miten, Omar Faruk Tekbilek, Peter Yarrow, and more), and Sandy Cressman on vocals. Clarion-call horn charts will be contributed by Peter Apfelbaum and Jeff Cressman (Santana, Don Cherry, Trey Anastasio, Charlie Hunter, Tito Puente, Shelia E, Joshua Redman, others), two veterans of Jai’s groundbreaking Pagan Love Orchestra. The group will also be joined by Brazilian-born guitarist Jose Neto(Harry Belafonte, Hugh Masekela, George Benson, Steve Winwood) who produced three tracks on the new album.
Clearly named after Bob Marley’s classic track “Roots Rock Reggae,” this project does celebrate the influence that reggae had on Uttal’s interpretation of classic Indian ragas. However, the title also refers to the practice of kirtan as the root of his life, the rock that is his foundation, and his devotion to Rama (God) throughout his work.
Kirtan is a call and response singing style popular with yoga practitioners who are now over 36 million strong in the US! Jai is a favorite performer on the growing yoga festival circuit, playing to thousands each summer at Bhakti Fests and other events. He also leads his own workshops and retreats that deepen yogis practice of the heart based Bhakti yoga method that is chanting the names of god to further enlightenment.
Co-produced with Uttal in 2016 by noted Northern California producer Ben Leinbach, the album is a double CD/extra-long stream with 12 5-12 minute tracks for about 80 minutes of music (typical of Kirtan, but also of that other California music staple – jam music!). CD 1 or the first 6 tracks are “Rama Sun” and are the more reggae influenced tracks (such as H.A.R.I., please listen here) – deeply steeped in earthy rhythms, hypnotic bass lines, jubilant horn charts and soulful vocal harmonies. CD 2, the next 6 tracks are “Rama Moon” and find Uttal in an entirely different mood. Grounded in the gentle, lilting sway of Brazilian samba, it also touches on the pastoral splendor of the more acoustic tracks from the Beatles’ White Album. The Beatles are another major influence, and Jai has brought their pioneering fusion of Indian music and Western pop into the 21st century.
With a unique boomer upbringing in the NYC music biz of the 50s and 60s (as a child he was at the session where Mitch Ryder recorded “Devil With a Blue Dress”!) Uttal understands true musicianship and has worked with top musicians including Bill Laswell, Don Cherry, and his musical guru Ustad Ali Akbar Khan throughout his career.
Additionally, his story flows with that of his generation – in the 70s he studied with Khan in the Bay Area while making extended trips to the Indian Ashram of Neem Karoli Baba the same guru who influenced Ram Dass’ classic Be Here Now. Maharajji, as the guru is known to his students, encouraged the practice of bhakti (devotional) yoga as expressed through kirtan, the call-and-response chanting of sacred names, over and over again until they become deeply instilled in the consciousness, providing an experience of profound peace and spiritual insight. Kirtan would become the center of Jai’s musical and spiritual life.
The 80s were dedicated to his music career which took off in 1990 with his first album Footprints that featured Don Cherry and other notables, launching him into the exploding world music scene. Now, eighteen albums, marriage, fatherhood, a Grammy nomination, and 26 years of worldwide acclaim later Roots! Rock! Rama! continues his legacy.