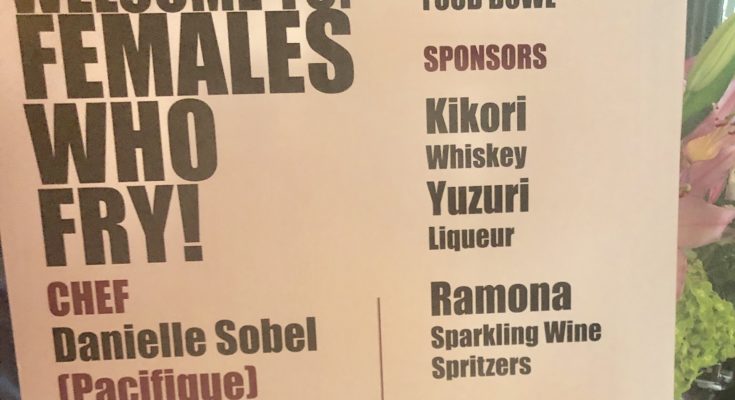 (EXPERIENCE MAGAZINE) — WEST HOLLYWOOD, CA — Tuesday, May 28th — Tuesday night was fried chicken night for the LA Times Food Bowl. Foodies patiently waited in a long line outside of the trendy Pacifique LA in We Ho. Pacific LA is a new American restaurant featuring seasonal Asian cuisine. Chef Danielle Sobel from Pacfique was on hand offering her fried chicken with lemon. This was a top notch gourmet dish. The chicken was fried perfectly, the nad made sauce had a touch of dill and the lemon was reminicent of a fish and chips theme. The restaurant was packed while people waited in a long line at the bar for delicious Kikori cocktails. We sampled both the Ramona sparkling wine spritzer and a Kikori cocktail. The spritzers were light, cold and delicious. The Kikori whisky tasted good and people semmed to enjoy the drinks from the bar. Pacifique is a really nice place.

One of the popular offerings of the evening was Kuniko Yagi’s maki hand roll inspired fried chicken. The flavors of pickled daikon radish and a light hand made sauce made this tasty and a crowd favorite. I had a couple of these dishes and it really was a blend of Asian flavors.

One of the most popular items of the evening was a fried chicken slider by Kat Turner of Highly Likely. It was hard to get one of these as they were snatched up as soon as they came out. The selection of chicken for this dish, and all of these offerings was top notch.

One of the stand out dishes was created by chef Nyesha Arrington. She was serving a fried chicken wing or a fried drumstick with a tiny plate of greens.

As soon as her helper brought out a giant bowl of freshly fried chicken, they were gobbled up by people waiting and taking selfies with chef Nyesha.

The LA Food Bowl has been taking place all over Los Angeles during the month of May. It’s been a great Food Bowl. Jonathan Gold, the founder of the Food Bowl, is sorely missed. People still tell stories of Jonathan and the different dishes he brought to our attention. The food bowl concludes on Fridays, May 31st.