Writer and Photos by: John Barsky 2014 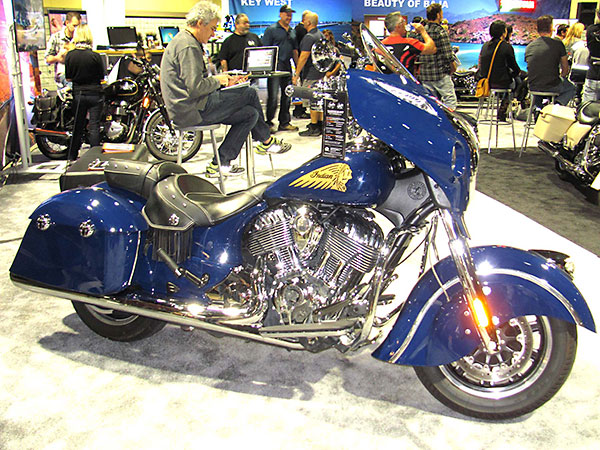 The Long Beach show featured motorbikes by many manufactures from around the world. Most of the major brands were represented with motorcycles of all sizes and descriptions as well as many off brand bikes from places like Korea and China. 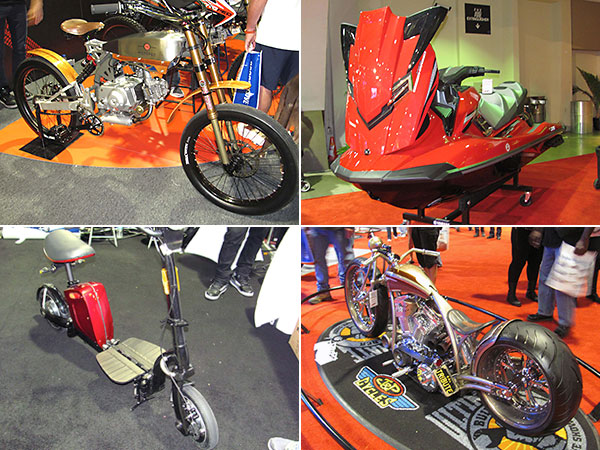 Many manufactures are now concentrating on smaller bikes for riders that cannot handle the bigger sized bikes. Honda came out with it’s new mini street legal racer called the Grom, a bike not legal for the freeways but great to use around town on city streets and on country roads. Harley-Davidson, well known for it’s bigger bikes in the 1000 c.c class and above, now has two smaller bikes. These bikes include a 750 c.c. street model and a 900 c.c. street model called the Bolt. Also featured were bikes that are actually motorized bicycles for on and off road usage and smaller bikes for fun and transportation. One interesting folding scooter was the electric Mogobike (www.mogobike.com) that folds into a unit that resembles a golf bag that one can take on public transportation buses and trains folded and then sets up in seconds to make a transportation unit that will go around 20 miles on a single charge. Also featured at the show were bikes of all sizes, custom bikes built for contests,which one was at the show itself and even water bikes(jet skis) that can hold up to three riders at a time. There were booths that carried motorcycle gear ,upkeep supplies for bikes and helmets.

The Los Angeles Automobile show featured many automobiles in about three time the space of the Long Beach bike show but also had a few bikes in the lower hall of the L.A. Convention center. Also, there were many off site events that were put on by the various manufacturers including Hyundai, Mazda, Range Rover and Porsche. These events were mixed with entertainment and demonstrations involving the various automobiles being featured. Mazda had it’s event at Raleigh Studios in Hollywood and premiered it’s new line of CX vehicles. Hyundai had it’s event at the Hotel Figueroa and featured Joan Jett and the Blackhearts performing. Range Rover showed it’s line of Automobiles at The Pacific Design Center and featured and obstacle course that ran around the outside fountains both in the water and out on bridges that connected around the outside patio area of the center. 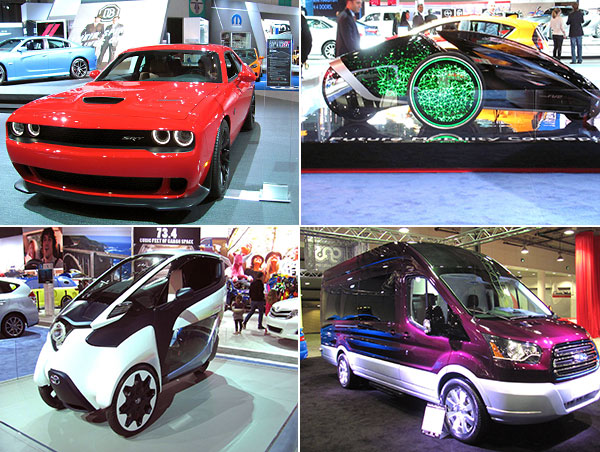 Many new models were present at the show and autos that use electricity and hydrogen were displayed to show alternative uses besides petroleum to power their vehicles.Toyota Volkwagen, BMW and Kia were among those that were displayed. Aside from the newer 2015 models that were displayed there were also custom and racing models of many vehicles present. Demonstration rides, various accesories for vehicles and trucks were also on display for show goers to check out and sit in on the show floors in all the sections of the L.A. Convention Center. Both shows featured demonstration rides on certain vehicles in spaces and lots around the convention centers.

Both shows were great to be at and are expected to be even better in the future with more and more upgrades to come. Technology plays a big part in vehicles with much effort put into cars and bikes to make electronics more compatable with phone usage features and fuel alternatives to petroleum.