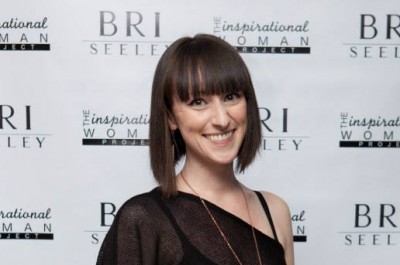 “After watching my fashion clients consistently struggle to connect with their femininity and fully embrace being women, I created a 30 day blog series to explore these topics.” Founder Bri Seeley notes that “within a few weeks, The Inspirational Woman Project quickly blossomed into a book and a movement to encourage all women to connect with their power of inspiration and then embody it through their actions, words, dress, etc. on the outside.”

As for the event,”It’s been great and it all happened so quickly,” said an excited Seeley. “Tonight I’m celebrating the launch, but moreover, acknowledging the 150 kick ass women in attendance. This movement was born out of my fashion line.” Bri’s designs are bold yet feminine and command attention, much like Bri herself. “Many women didn’t feel comfortable wearing it initially. I thought I that could empower them..teach them what being a woman means to me and dress them in that manner,” she added.

The movement was founded in May 2014 and instantly gained momentum after Seeley was featured speaking of the project and women’s issues in the Huffington Post and on The TODAY Show. Seeley also led the movement through a successful Kickstarter campaign in September 2014 wherein she raised $15,000 to self publish an eponymous coffee table book composed of 99 interviews with women of all ages, races, educations, cultures, religions, occupations, etc. Interviewee Mallory Armstrong reflected on the process of being interviewed for the book. “I originally felt really intimidated to participate in these interviews thinking, ‘What have I accomplished that’s inspirational?’ But perhaps that’s the beauty of it all. You don’t have to be Mother Theresa. You don’t have to be Hillary Clinton, Arianna Huffington or Sophia Amoruso. You just have to be the best version of yourself, and you’re bound to make a difference in at least one person’s life.” The launch party began with a panel of women featured in the book answering questions around femininity, inspiration, passion, achievement, equality, and being women.

Several women of note that were be on the panel include: Italia Ricci (Actress from ABC Family’s Chasing Life), Brooke June (Doctor of Philosophy), Kate Retherford (Fashion Blogger), Megyn Bell (Founder Glam On Inc.), Rachael Yahne (Author and Huffington Post Blogger), Dossé-Via Trenou (model and graduate student), and more. All of the panel participants stayed for a book signing to follow the panel. Glamsquad, an on-demand, in-home beauty app that sends blowout and makeup artists straight to your home, was onsite doing hair and makeup touch ups. All attendees walked away with a card for a free, in-home blow-out service. Ticket proceeds for the event benefitted Women Empowered, a local nonprofit organization that connects, educates and supports women of all ages and backgrounds, and inspires them to give back to their communities through mentorship, networking and volunteerism.

The Inspirational Woman Project was created to change the world. They believe that EVERY woman is inspirational. And they believe in the power of combining our individual inspiration to create an impact felt by all future generations of women. For additional information about The Inspirational Woman Project visit www.briseeley.com  There is also more info about the event at @Women_Empowered and @TGIFGuide. More info about the event sponsors at @Hint_Water, @CaressSkin, and @GlamSquad