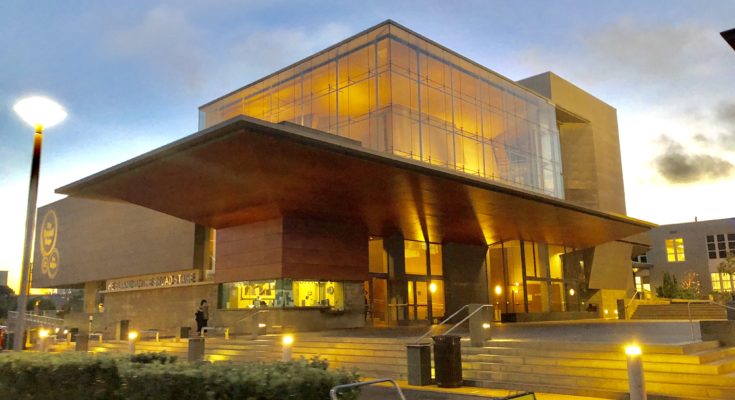 (EXPERIENCE MAGAZINE) – The greatest klezmer band in the world just rolled into the Broad stage on a Thursday night in March. Known for being one of the top, if not the best, klezmer bands that have ever played. The Grammy winning Klezmatics play an electric Eastern European Jewish music that is full of nostalgia, emotion and old fashion rhythms. The Klezmatics are a socially conscious New York City band. They sing in Yiddish and they get the crowd to sing with them.

On a few of the songs, I couldn’t understand the words, but being an avid lover of American bluegrass, I know that all great folk songs are about loss. I thoroughly enjoyed listening to the choruses and verses in each tune. The Klezmatics encourage participation. Lead singer Lorin Sklamberg encouraged everyone to clap along and sing along if they kew the words. They played songs in English, Yiddish, I think one was in German.

The highlight of the evening was when Joshua Nelson came out. First of all, he was wearing a gorgeous robe that might be from his home country of Senegal. Or it might be a robe from the Baptist church where he sings gospel music in New Jersey. At one point, he donned a shtreimel which is fur hat that is used in a traditional Jewish ceremony. Let me say that Joshua Nelson is an amazing musician with a rich, full voice. He adds an energy to the Klezmatics. His performance was a pure delight. On his singing of Elijah Rock, I have to say, it was just so much fun to watch. It was fun to clap. It was a delight to enjoy this kind of music at the Broad theatre with other people that enjoy Klezmer music.

Another exciting musician with the Klezmatics is multi-instrumentalist Frank London. Frank shines on the trumpet. His playing is clear, full and reminiscent of a different time. The Klezmatics doesn’t work unless it has each musical element. The trumpet is so key. Frank can really play.
Matt Darriau is another key element of the Klezmatics. On this night, Matt played saxophone, clarinet and of course he sang. His saxophone playing is masterful. His clarinet paying really adds to these songs. I love the sound of traditional Jewish clarinet music. It makes me feel like I’m in a European country in the 1940s.

Richie Barshay holds down the drums. He’s a master level player. He makes complicated rhythms sound easy and simple. Great energy from Richie. Richie has great feel on drums. Together with bass player Paul Morrissett, these two held down the rhythm for the Klezmatics.
At one point during the concert, I looked at my watch and realized that an hour had just slipped by. It felt like 15 minutes. Time just flew by as we came together on this Thursday before Passover. If you get a chance to see the Klezmatics, you simply must see them! I feel so lucky to have seen the Klezmatics at the Broad Theater.