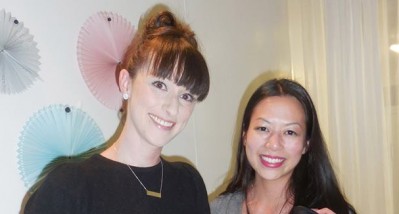 Acclaimed fashion designer and noted author Bri Seeley hosted a Girls Night of Indulgence with The Caress Forever Collection and with Beatrice Tsang of Baby Bea’s Bakeshop. This new bakery is a fabulous addition to trendy Robertson Boulevard in Beverly Hills. Attendees were greeted with a tasty array of  endless fresh baked goods from mint chocolate cupcakes to cake pops to champagne, and this being Los Angeles, some gluten free selections were on hand.

The purpose of the event was for the women to truly allow themselves a well deserved night of fun, connection, and inspiration – a time to indulge for themselves, hence the title and theme of the event. The spark for the event came during a conversation with Beatrice (founder of Baby Bea’s Bakeshop) and Bri, wherein they both noted that women often hold themselves back from what they really want in life. Ranging from a simple cupcake to that dream job or making a big move – a lot of women tend to talk themselves out of their desires.

“Bri and I have done events together and we’ve become a great team. It’s a great feeling to empower other women to do what they want in life,” said Beatrice, owner of the eponymous bakery.

Bri is also the founder of the Inspirational Woman Project and tirelessly donates her time to supporting other women and womens’ causes. “Beatrice often tells me about women come here with their kids and buy their children whatever they want, but never allow themselves a treat. So the theme tonight is to indulge in cupcakes and champagne and just to indulget in general, whatever one’s indulgence is. It’s women giving the space to women to let them play and just take a break from their busy lives,” said Bri.

So, these two incredibly talented ladies came up with this timely event where women can just say yes to taking time for themselves. Or to that cookie or cupcake (or three!) that they would usually decline? This intrepid reporter helped herself to too many of Beatrice’s mouth-watering cupcakes and out of this world butter cookies, but felt no guilt or shame as I was in the company of some amazing women. So let them all eat cake or rather cupcakes! And I will bring on the elastic waistbands!