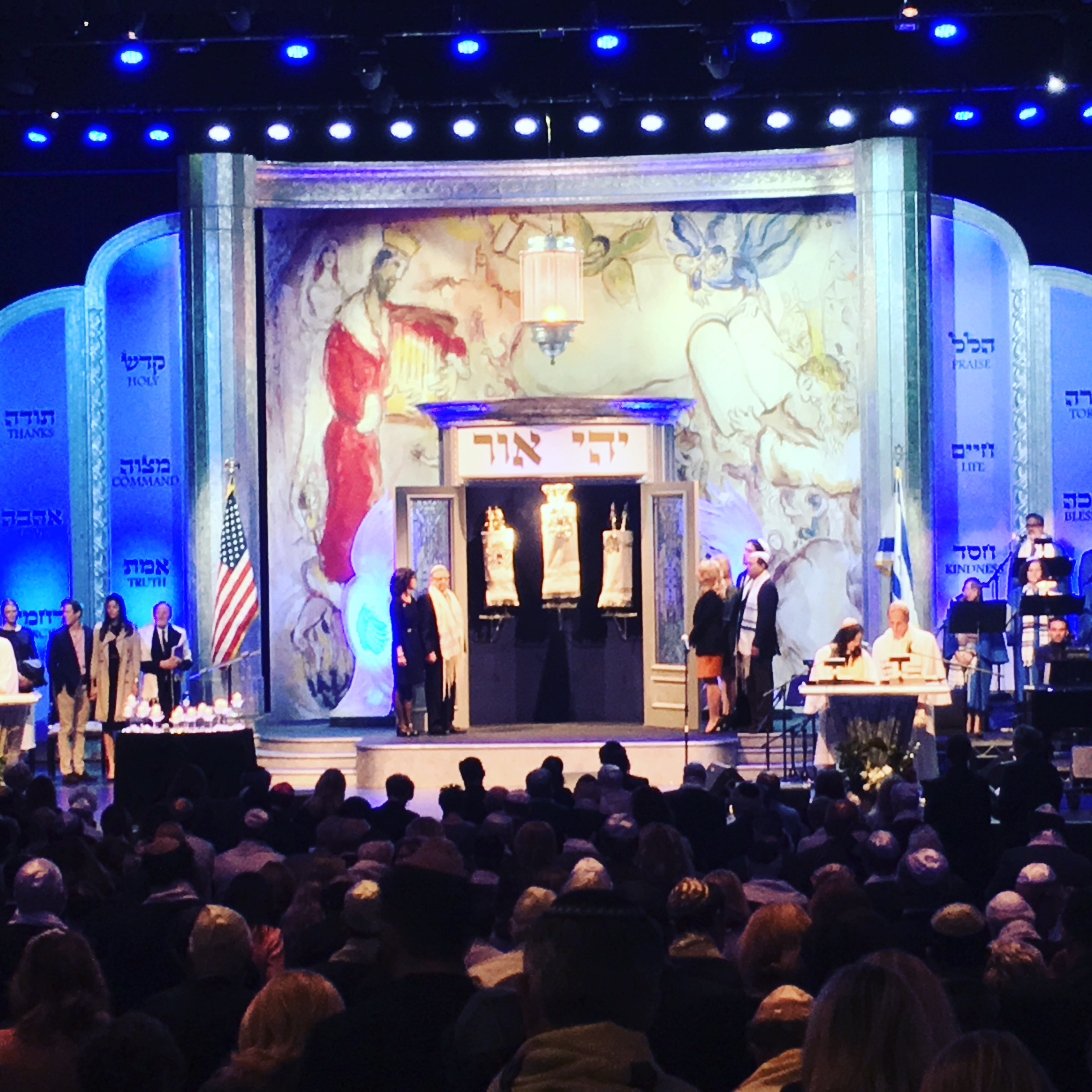 LOS ANGELES – Rabbi David Baron welcomed the holiest day of the Jewish New Year Wednesday, October 12th. The Experience Magazine got a chance to speak with Rabbi David before the service began. He told us that the sermon for Yom Kippur was “Jewish Resilience”. Rabbi David went on to tell us about the busy day at the Temple and what would be going on.

We asked Rabbi David if he considers himself an Evangelical Rabbi. He laughed and said, “Well, I’m known as a Renegade Rabbi, but I’m not evangelical.” So there you have it – Renegade Rabbi David Baron. Rabbi David is the founder of the Beverly Hills Temple of the Arts which is the largest arts and entertainment synagogue in the United States.
Also appearing at the days celebration would be Leo Melamed, Greg Krentzman, Moti Kahana and Brigitte Gabriel. Leo is a holocaust survivor and is an influential figure in the world of finance. He is known for creating futures on the stock market. Brigitte Gabriel is full of energy and wants to tell people about her family’s experience of abuse and about how they managed to hide from Islamic Extremists until they could escape. Brigitte is an expert on Islamic Terrorism. She is also the founder and President of ACT for America which is the largest non-profit, non-partisan, grassroots national security organization. Moto Kahana was also at the synagogue on Wednesday. Moto is known for being an IsraeliLithuania philanthropist.
Greg Krentzman’s taped video recording was amazing. Greg told how he was walking on the promenade in Nice, France and his wife yelled to him and his daughter, Lola, to jump. Greg said that he had to make a split second decision which way to jump and he jumped left. The truck hit his leg and Lola was bruised but otherwise OK. Greg said if he would have jumped right, He would’ve been killed. Greg is still in the hospital and he recorded his message from his hospital bed. His story exemplifies Jewish resilience and survival. Greg has such a good attitude and positive out look on life.

Brigitte Gabriel spoke to the members about her story. It was so heartbreaking to hear about how they basically survived by living in a basement. They had no food and were in danger of being discovered at any moment. Being captured by ISIS meant certain death. Brigitte went on to say that Islam keeps countries backwards and teaches children terrorism. She put a voice to what many are afraid to say about ISIS. Brigitte is passionate about her position and is doing everything she can to make people aware about ISIS.

The Experience Magazine got a minute to speak with Leo Melamed before he addressed the Synagogue. I asked Leo how he and his family had escaped the Nazis. He said when he was 7 years old, in 1939, his family lived in Poland. His father was an activist against Nazis and Communists. One day, his father said, “We have to leave Poland because the Nazis are coming”. Leo said his father was a very smart man. The smartest man he ever knew. So, Leo, his Father and Mother left for Lithuania. After Lithuania, they went to Vladivostok, Russia which is in Eastern Russia on the Pacific Ocean just north of Japan. His family received a transit visa for Japan by Chiune Sugihara. Mr. Sugihara is known as the Japanese Schindler and saved 6,000 Jews. Leo and his family left Vladivostok on a Junk which is a Chinese ocean going vessel. He said the ocean was very rough but they made it. He arrived in Tsuruga, Japan in January of 1941. Tsuruga is a port city in Fukui Prefecture. Leo said the Japanese were very gracious and gave them flowers and fruit. The Melameds went by train from Tsuruga in the Wakasa region to Kobe, Japan in the Kansai Region. They stayed in Kobe for five months. Of course, eleven months after their arrival, Japan would bomb Pearl Harbor and enter World War Two. Luckily, his family left Japan for the United States in June of 1941. Leo said they never had any money while in Japan and a charitable organization always made sure that they had food. Leo’s story exemplifies resilience in his capacity to recover quickly from difficulties.

Moti Kahana spoke a bit about his work with Syrian refuges. Moti has provided hundreds of Passports for Syrians and is working with Israeli Defense Forces and local councils in Syria to bring more than a million Syrians to a “Safe Zone” in Southern Syria. Check out Amaliah.org. This is the organization that Moti founded in 2013 which is based in New York City. Amaliah.org’s mission is to establish the Safe Zone in Southern Syria so displaced Syrians could return to Syria and rebuild a civil society. Moti is working on a book about his experiences in Syria called, “Looking for God in Syria”.

The Yom Kippur services went on all day. Yom Kippur is the most important holiday on the Jewish Calendar. Many Jewish people who don’t go to Temple throughout the year will fast, refrain from work and attend synagogue. The Day of Atonement at the Saban Theatre was marked with fasting, prayer and repentance. Many people in attendance were seeking to “afflict their soul” and atone for their sins from the past year. The fasting lasts for 25 hours and begins before sunset on the evening before Yom Kippur. Another less known tradition for Yom Kippur is wearing canvas sneakers with dress clothes. It’s a sort of Jewish fashion statement that has to do with not wearing leather shoes during Yom Kippur. It’s also customary to wear white on Yom Kippur which is a symbol of purity. There were many members in sneakers and wearing white.
Rabbi David continued to lead the synagogue through all the prayers. He would explain what each prayer was for and invite certain members up to open the arc and see the Torah. The Torah made its way all the way through the Saban. There was a quick chance for everybody in attendance to touch the Torah. The Torah at the Beverly Hills Temple of the Arts is new. It was quite a site and looked great while on display in the arc.