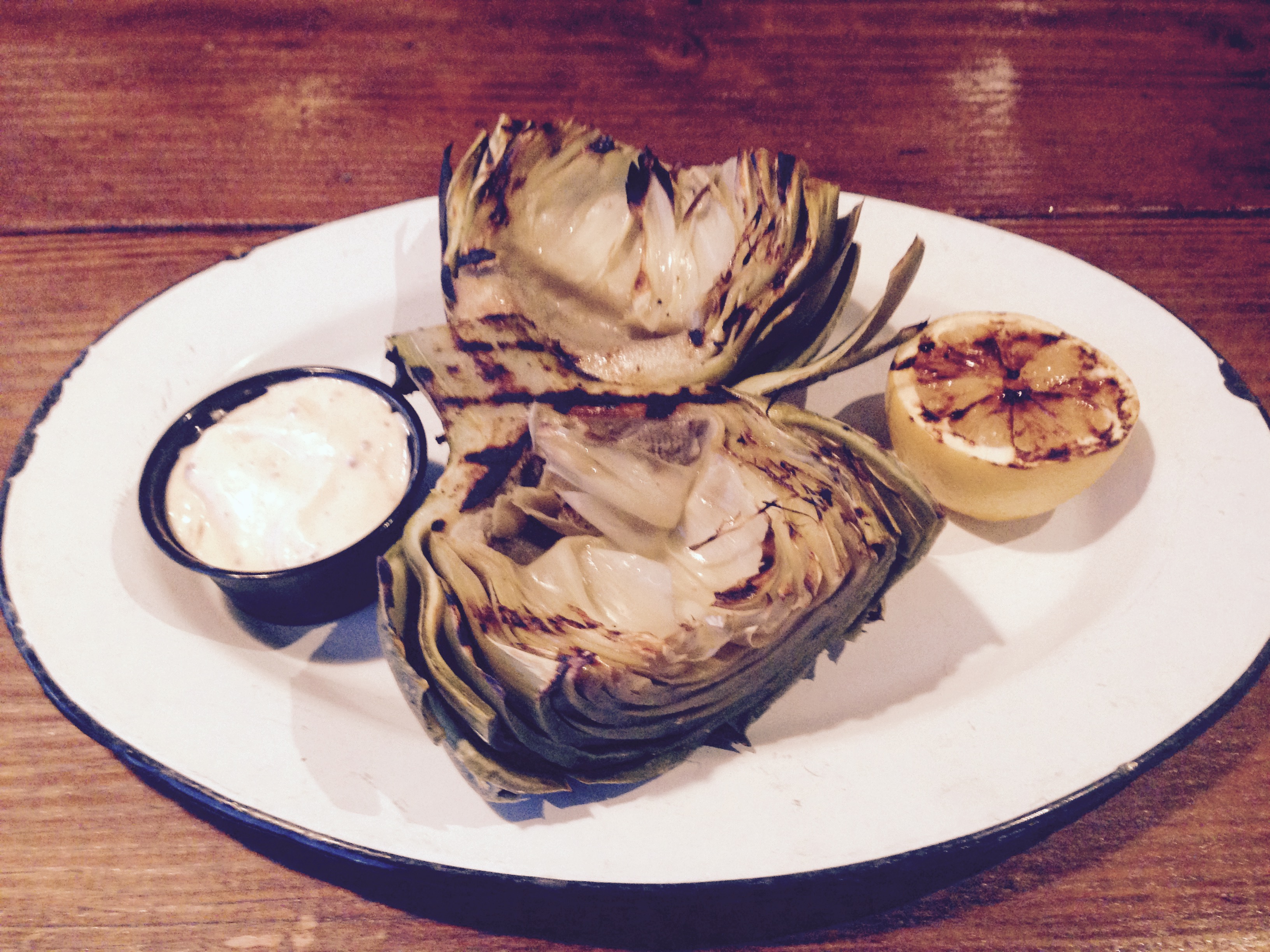 The Experience Magazine was delighted for the opportunity to cover Eat Well Week™, January 11-17, 2016 in Santa Monica. This was a great way to sample the world class, healthy gourmet options available on the Westside. By trying the various artichoke dishes, and then voting for your favorite one by posting about it on Facebook, Twitter or Instagram using the hashtag #EatWellVote, you’ll be participating in Eat Well Weeks contest and eligible for prizes.

The Artichoke offerings we sampled were;

Walking into Upper West is like finding an oasis of good food in an otherwise low key area of Pico boulevard. The bar is open and inviting. The atmosphere on Friday night is festive as large groups of hard working Westsiders imbibe in a post work cocktail.

For Eat Well Week, we sampled the  Chargrilled Artichoke. This is Jerusalem artichoke purée, chimichurri, baby basil, pomegranate and ginger vinegar. Upper West is such a great destination with world class chef Nick at the helm. It’s always a pleasure to stop by Upper West. We also tried the very popular veggie burger. The kale salad is also a delicious starter with fresh cut apples. The bar at Upper West is fully stocked. The Moscow Mule is a handcrafted cocktail that is well blended with a smooth taste.

Walking into Rawvolution is like being transported to a special place where raw foods are presented by hip, young servers who are fluent in surf lingo and Krishna consciousness. Images of Indian deities were being hung as we sampled the vegan offerings.

When we arrived at Seasons 52 in Santa Monica, it was warm for this time of year. Feeling more like spring than winter, the atmosphere inside was festive as large parties gather for flatbread tapas and wine pairings. For Eat Well Week, we sampled the Artichoke & Laurel Chenel Goat Cheese Bread. Seasons 52’s in house made bread topped with marinated artichokes, leaf spinach, balsamic onions, and roasted red peppers.

The specially designed ovens produce some of the best flatbread pizza on the Promenade. Seasons 52 is a great place to visit because of the relaxed setting and large tables. There always seems to be a gathering meeting up and enjoying the food and drinks at Seasons 52.

When we stopped by eLOVate on Ocean for Eat Well Week the place was hoping. eLOVate is in a great location. Feasting on the organic, vegan delights are foodies, professionals and locals. The bar at eLOVate is a meeting spot for the Waverley Condominiums and anyone in downtown Santa Monica. Chef Roberto and his staff create an inviting atmosphere. I always feel welcome here.
For Eat Well Week, Chef Roberto created an Artichoke Ceviche. This blended hearts of palm, artichoke, tomato, cilantro, lime, escabeche, chipotle aioli
This was a nachos type of appetizer with a vegan cheese sauce and a salsa drizzled on top. Undoubtedly the best vegetarian nachos offering on the Eat Well Week Santa Monica that we tried.

Yunnie Kim Morena has taken the helm of family owned Santa Monica Pier Seafood renaming it Albright. With ingredients that are locally sourced from the farmers market, the menu features craft beer and California wine. The atmosphere at Albright is sophisticated. It allows beach goers a space to relax and enjoy great food.  The Eat Well Week Santa Monica offering was the Grilled Artichoke. This healthy offering combined fire-grilled artichokes with a creamy garlic aioli sauce.

Chef Gianfranco rolled out the red carpet for Eat Well Week Santa Monica. We sampled several artichoke based dishes. Each one was better than the last. The atmosphere at Locanda del Lago is refined and classic. The murals and art work are rich and refined. Its a little like being in Northern Italy. The menu is cuisine from the Lake Como region of italy.

To start with, we sampled the Cuori di Carciofi Fritti, Salsa di Pomodoro. This dish matched fried artichokes with a vinegar-tomato sauce and cilantro pesto.Our waiter suggested the Areneis, Cretto “Blange”. It was an excellent pairing. The wine was crisp and it paired well with the artichoke.

Next we tried the Risotto con Carciofi e Burrata. Using organic carnaroli risotto, artichoke, burrata cheese and parmesan. Chef Gianfranco balanced Santa Monica’s Farmers’ Market artichokes from Life’s a Choke, garlic from Weiser Farm and parsley from Maggie’s Farm. The Burrata is made by Gioia Cheese, a local Italian cheese maker from Los Angeles. This risotto, artichoke buratta dish was marvelous. The flavor was even with textures complementing each other. The wine suggested was the Fume’ Blanc by Dry Creek. Once again, I was captivated with the pairing and thought that the wine truly enhanced the flavor of the dish.

For a third course, we sampled the Branzino in Umido con Carciofi. A white wine poached Mediterranean Sea Bass with artichoke and spinach. It was cooked to a delicate flakiness. Paired with a Pinot Noir by MacMurray. The artichoke had a lemony, delicate texture to add to the fish. I felt so honored to be sampling such a creation.

Chef Gianfranco uses the freshest organic produce to create a seasonal menu. Lago makes pasta, focaccia bread, desserts and gelato fresh daily. The location of Arizona and 3rd Street in downtown Santa Monica is perfect for meeting friends or stopping by for a drink at the bar.