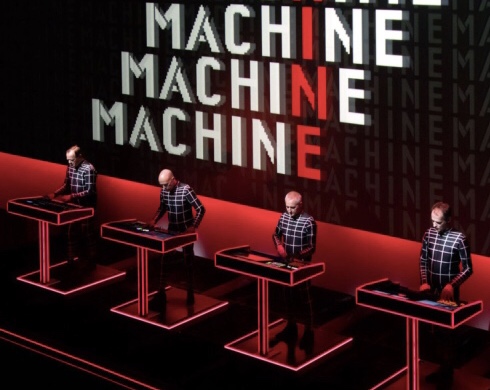 (EXPERIENCE MAGAZINE) — Los Angeles, CA — Thursday, May 14th, 2020 — I was very much involved with 80s techno pop and with all respect I don’t think I would have without Kraftwerk. I was just working out on some of my synths at the home studio when I learned of his passing. With a sequencer going in the background I am writing this. I first saw Kraftwerk in 1980 at the Santa Monica Civic. It was really mind blowing seeing them live because they just brought their whole Kling Klang studio on stage which resembled a star trek galley. 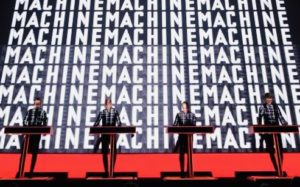 Keep in mind this was before the digital age but they foresaw the whole digital age with their album “Computor World. “ When they did “Pocket Calculator” they had a devise they let the audience punch the keys to resemble the sounds of the calculator. Years later I saw them at the Hollywood Palladium. There was no curtain. The chemical bros opened up for them and Kraftwerk would not go on without a curtain for their set-up so there was a delay
but a curtain was put up so the “robots” could perform. As I expected a great show. Kraftwerk was way ahead of their time and influenced many famous acts.

Africa Bambatta had his his hit “planet rock with riffs right from Kraftwerk. I believe Kraftwerk saw it as a compliment when they were being copied so you never heard of any lawsuits. They knew no one
could come even close to touching them. I saw them again at the Greek Theater and at this point they streamlined their act with just the member on stage with there laptops as controllers.

I next saw them at the Hollywood Bowl in 3-D. I believe Kraftwerk is the very first band to do that live. I ended up with a box seat which is in the front. The Bowl is a venue if you get a seat way in the back you have to have binoculars
in order to see the show. Kraftwerk in 3-D outdoors was really spectacular. This is right before disney hall part
put in ending— I am glad to say that i saw them everytime they played in L.A since there first show in 80 at the Santa Monica Civic. The visuals for this show had been refined with advanced computer graphics which was an integral part of the show. When I found out they were going to do Disney Hall I got really excited to see them but it was totally sold out. I had to get out my Houdini notes to get in but I got to see the show at Disney Hall and this show was the pinnacle experience for me to see and experience. I thought they were so cool in playing every big venue in town i believed they played all venue until I saw that they were going to do The Shrine Auditorium in November. At this point I don’t know if it will still happen because of the corona virus. If they do that is the one event i would break my protocol to see. Thank you Kraftwerk and R.I.P Florian Schneider.

Editors note: Erwin Glaub was in Martini Ranch, Gaea and Zabadak in the 80’s being one of the very first to take on analog electronic percussion. He came up with the term “Syncussionist.” He is working on a new studio project and will always acknowledge Kraftwerk as his biggest influence and a devoted fan! You can see Erwin’s art work at ErwinErwin.com 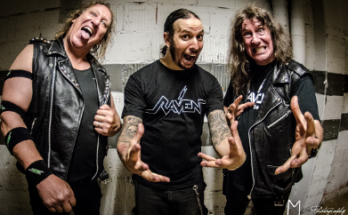