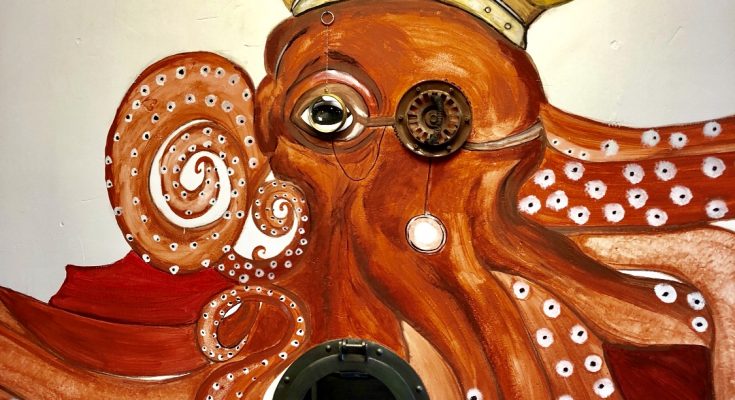 (EXPERIENCE MAGAZINE) — Newport Beach, CA — Thursday, May 3rd, 2018 — So many people are talking about Hook and Anchor in Newport Beach. This place is an amazing concept that puts chef made gourmet seafood in a price range that’s affordable. The experience magazine stopped by to meet Chef Wayne and his wife Mercedez who run this dinning hot spot on the Balboa Peninsula In Newport Beach. The menu features seasonal crab , fish, lobster, sandwiches, appetizers and a whole lot more.
The restaurant is a lot of fun and a lot of care has been taken with creating the menu, selecting the ingredients and making the atmosphere. Affordable gourmet is not a new idea, but Hook and Anchor does it so well.
To start our dinner,  we had a small sampling of oysters. There were three expertly prepared oysters that were presented by Chef Wayne himself. We tried a Northern Baja, a fried oyster, and an oyster with a tiny edible flower. I have been cutting down on oysters lately because I’m concerned about eating oysters that aren’t fresh let me just say that these oysters were extremely fresh and the taste was off the charts delicious. The mignonette was prepared by Chef Wayne in house. As a matter of fact, all of the sauces are made in house. If you don’t know, having a chef prepare your food is different than a line cook who just puts a plate together.
Chef Wayne has mastered these dishes on so many levels. He personally  selects the sushi grade fish for Hook & Anchor and buys it himself. The care that is used in selecting the ingredients makes all the difference. Especially when eating sea food. We tried the Halibut Hook Plate next. I can’t describe how delicious this is. You simply must try it. Chef Wayne uses sushi grade fish and you can really tell. Made with a garlic, shallot and ponzu sauce, there is so much subtle flavor. The flavors mix together to create a special gourmet taste that you might find at the Ritz Carlton or a five star restaurant. There’s so much flavor in the Halibut. The garlic and ponzu sauce mix together and the flavor melds together. This dish comes with a curry parsnip puree that is out of this world.

Hook & Anchor is as family owned business. Mercedez built the counter that we ate on and put the floor in. Artist Pam Lundeen painted the giant steampunk octopus that is prominently featured in the dinning room. The port hole mirror/windows continue the cool steampunk vibe. The restaurant can seat families or large groups on the community table.  People canalso  dine at the two-top tables and the counter. The restaurant is located so close to the marina. I’m sure that people regularly stop by and pick up a to-go order and bring it on their yacht or take the food down to the beach. This restaurant is going to put Chef Wayne and Mercedez on the culinary map in Southern California. I have already told people in Los Angeles that they need to drive down to Newport Beach from Los Angeles just to try Hook & Anchor.
Every dish that I tried at Hook & Anchor just blew me away. I have to mention a few of the amazing things that we tried. In addition to the Halibut cheek, and the Halibut Hook Plate we tried the Lobster Fries. These fries have parmesan cheese, some Sriracha sauce to spice it up and a touch of lemon mayo. But the thing that turns these fries into fire is the expertly made lobster meat that sits on top. At first I wasn’t sure how it’d taste because it’s claw meat, but I have to say. This is the best tasting lobster claw meat I’ve ever eaten. I don’t know how Chef Wayne does it. Maybe a pressure cooker, maybe a secret recipe, but every bite of lobster was delicious. Each bite was better than the last.
The Lobster Mac and Cheese was also way over the top. Really good lobster, delicious gourmet comfort food mac and cheese.
We also sampled the gluten free clam chowder. Wow. This is an amazing bowl of chef prepared clam chowder. And its gluten free! The flavors are balanced. The clams are fresh. We were served the perfect amount.
By the end of our feast, I was absolutely stuffed. I wish I could’ve kept eating. I wanted to try everything on the menu. Stop by Hook & Anchor in Newport Beach to have an affordable gourmet culinary experience. We highly recommend you stop by soon!
Check out the website for Hook & Anchor here.