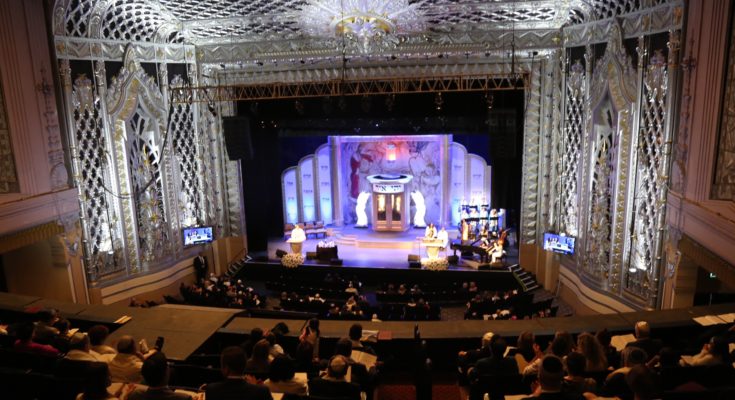 (EXPERIENCE MAGAZINE) — BEVERLY HILLS, CA — RABBI DAVID BARON, Founder of the Beverly Hills Temple of the Arts, the largest arts and entertainment synagogue in the United States which owns the Saban Theatre hosted another amazing Kol Nidre and Yom Kippur. Yom Kippur is the day of atonement and is the holiest day of the year on the Jewish calendar. It’s a day of prayer and fasting for Jewish people around the world.

The Eve of Yom Kippur (Kol Nidre) on Tuesday, October 8th, and Yom Kippur on Wednesday, October 9th represent the end of a 10-day period of repentance, which began with the Jewish New Year 5780, Rosh Hashanah, on Sunday evening, September 29th. Historically, it is on the 10th day between Rosh Hashanah and Yom Kippur on which Moses completed and brought down the second set of commandments from Mount Sinai, signifying that God had granted atonement for the people’s sin of the Golden calf.

Guests for Yom Kippur this year included Jonathan Morales, a hero of the Poway Chabad Synagogue shooting; renowned violinist Vijay Gutpa, formerly of the Los Angeles Philharmonic, who played one of the Violins of Hope rescued from the Holocaust in observance of the upcoming 75th Anniversary of the liberation of Auschwitz-Birkeanu and other Holocaust concentration camps; Holocaust survivor Suzanne M. Reyto, Chairman of the Violins of Hope Los Angeles; acclaimed cellist Michael Fitzpatrick, whose grandfather, Bronislaw Huberman was the legendary violin virtuoso and Founder of the Israel Philharmonic Orchestra; Lana Melman, CEO of Liberate Art Inc., a leader in combating the Boycott, Divestment and Sanctions Campaign against Israel; and Dr. Judea Pearl, father of the slain Wall Street Journal reporter, Daniel Pearl, who talked about anti-Semitism and Zionism, and the month of October as a global music month in his son’s memory. 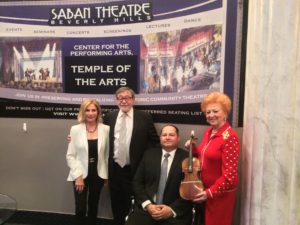 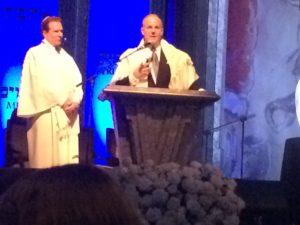 Rabbi Baron said, “All of my guests have incredible personal stories of transforming tragedy in their lives into meaning. Each of their stories exemplify the fragility of life and the strength of the human spirit which has been carried out in their respective lives through their acts of courageous deeds and humane kindness, all while bringing awareness and shedding light on subjects which need to be discussed globally. These are all inspirational and motivational messages we can learn from.”

Here’s a bit more about the amazing guests that attended this year;

Jonathan Morales – On April 27, 2019 at Passover, Jonathan Morales attended the Poway Chabad Synagogue near San Diego. Morales, an off-duty US Border Patrol Agent, lives in El Centro near the United States/Mexico border with his wife and three children. On that fateful day, when a hate-filled shooter burst into the synagogue firing his weapon, killing Lori Gilbert-Kaye and wounding Rabbi Goldstein, Jonathan, an armed officer and another congregant chased the attacker. His act of heroism averted many more deaths and injuries.

Morales began rediscovering his Jewish roots after a few mentions from his mother and grandmother regarding their Sephardic Jewish ancestry. After his first son was born, he was inspired to become stronger in his Judaism and started to attend synagogue on a regular basis. Morales says that his Jewish discovery has been a great journey that has formed new friendships, experiences and countless blessings. 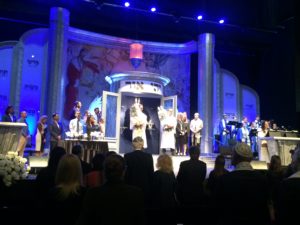 Vijay Gutpa is a violinist and social justice advocate. An esteemed performer, communicator, educator and citizen-artist, Gupta is a leading advocate in the role of the arts and music to heal, inspire, provoke change, and foster social connection. Gupta is the Founder and Artistic Director of Street Symphony, a non-profit organization providing musical engagement, dialogue and teaching artistry for homeless and incarcerated communities in Los Angeles.

Vijay Gupta is a 2018 John D. and Catherine T. MacArthur Fellow. Gupta made his solo debut as a First Violinist with the Israel Philharmonic Orchestra under the baton of Zubin Mehta at age 11. He joined the Los Angeles Philharmonic at age 19 and served as member of the first violin section through 2018 and is an active recitalist, soloist and chamber musician. Gupta also speaks and advocates nationally on the intersection of music, health, and social justice issues.

Elan Carr is the United States Envoy for Monitoring and Combating anti-Semitism. Elan is an American attorney, appointed on February 5, 2019 by Secretary of State Mike Pompeo to serve as the Special Envoy for Monitoring and Combating anti-Semitism. Prior to that appointment, Carr was a deputy district attorney in the Los Angeles County District Attorney’s office. His work focused on prosecution of crimes committed by street gang members, and later, of crimes against special victims, including domestic violence, child molestation, and sexual assault, such as those allegedly committed by the bicoastal “Tinder serial killer”
Danuel Drayton. Carr is also a JAG Corps officer in the U.S. Army Reserve and an Iraq War veteran.

Suzanne M. Reyto is Chairman of Violins of Hope Los Angeles County, whose mission is to educate about the Holocaust through music and culture using a collection of violins, violas and cellos rescued from the Holocaust. Each Violin of Hope has its own unique and inspiring story as each were played by Jewish musicians during the Holocaust. Reyto is overseeing a global tour of the Violins of Hope. One of the fully restored Violins of Hope will be played on Yom Kippur at the Beverly Hills Temple of the Arts at the Saban Theatre. An award-winning author, speaker, world traveler and an ardent supporter of Israel and the free world, Reyto is an immediate past Chairman of the Board of Governors of City of Hope, American Freedom Alliance and board member of Beverly Hills Women’s Club. She served as president of Hadassah Los Angeles and ZOA Western Region. Being a child survivor, Reyto is a frequent speaker at Los Angeles Museum of the Holocaust. Her childhood experiences and her ultimate escape from Communist Hungary in the late 1950’s left her with an unwavering spirit of optimism and perseverance. She works tirelessly for the preservation of our American way of life, liberty and the education of our future generations about history including the Holocaust.

Michael Fitzpatrick is the recipient of The Prince Charles Award for Musical Excellence conferred by HRH The Prince of Wales. Fitzpatrick’s collaboration with The Dalai Lama has been featured on PBS’ The Newshour with Jim Lehrer and on National Public Radio, and his pioneering recording COMPASSION, the unprecedented East-West musical convergence forged in the depths of Mammoth Cave, the largest cave system in the world. Fitzpatrick was instrumental in bringing together Muhammad Ali and The Dalai Lama for their historic Blessing Ceremony, and currently serves as Music Director of The Muhammad Ali Humanitarian Awards. Fitzpatrick performs as cello soloist around the world, with notable spotlight performances at The Vatican, Hollywood Bowl, United Nations and many more.

Lana Melman is the CEO of Liberate Art Inc., is a leader in combating the cultural Boycott, Divestment and Sanctions (BDS) campaign against Israel and a Hollywood liaison connecting Israel to the international creative community. A 20-year veteran of the entertainment industry, Melman has worked as a writer, producer, attorney and creative executive for companies such as CBS, Warner Bros., and Paramount. The cultural boycott campaign impacts the arts and entertainment and is a threat to both Israel and freedom of artistic expression. 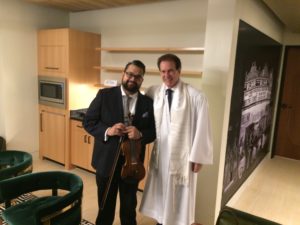 Melman has contacted close to a thousand representatives of artists targeted by the boycott campaign and was instrumental in preventing numerous cancellations of scheduled concerts in Israel. She produced the first anti-BDS celebrity panel including musician Alan Parsons and writer/director David Zucker. Together with other high-profile members of the entertainment community, she circulated a statement in support of Israel’s right to defend herself, which was ultimately signed by over 300 Hollywood luminaries, including Arnold Schwarzenegger, Seth Rogen, Kelsey Grammer, Sylvester Stallone, Roseanne Barr, and Sarah Silverman.

Melman also worked with Ziggy Marley, in support of Israel and served as the Hollywood liaison behind Variety’s “Spotlight on Israel TV.” She is often interviewed on talk radio and TV and works to educate others about the tactics, strategy and goals of the cultural BDS through speaking engagements and conference lectures. Her commentary and interviews have been featured in international publications.

Dr. Judea Pearl, father of slain Wall Street Journal reporter, Daniel Pearl, started Daniel Pearl Music Month, which is observed throughout the world during the month of October, in loving memory of his son. Pearl is a computer scientist and philosopher, best known for championing the probabilistic approach to artificial intelligence and the development of Bayesian networks. He is also credited for developing a theory of causal and counterfactual inference based on structural models. In 2011, the Association for Computing Machinery awarded Pearl with the Turing Award, the highest distinction in computer science, “for fundamental contributions to artificial intelligence through the development of a calculus for probabilistic and causal reasoning.” He is currently a professor of computer science and statistics and director of the Cognitive Systems Laboratory at UCLA. 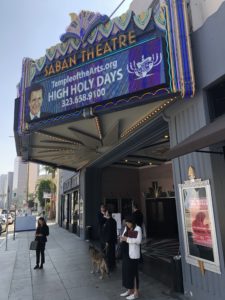 The Temple of the Arts always makes the High Holy Days so special. The Experience Magazine looks forward to future events at the Saban Theater.