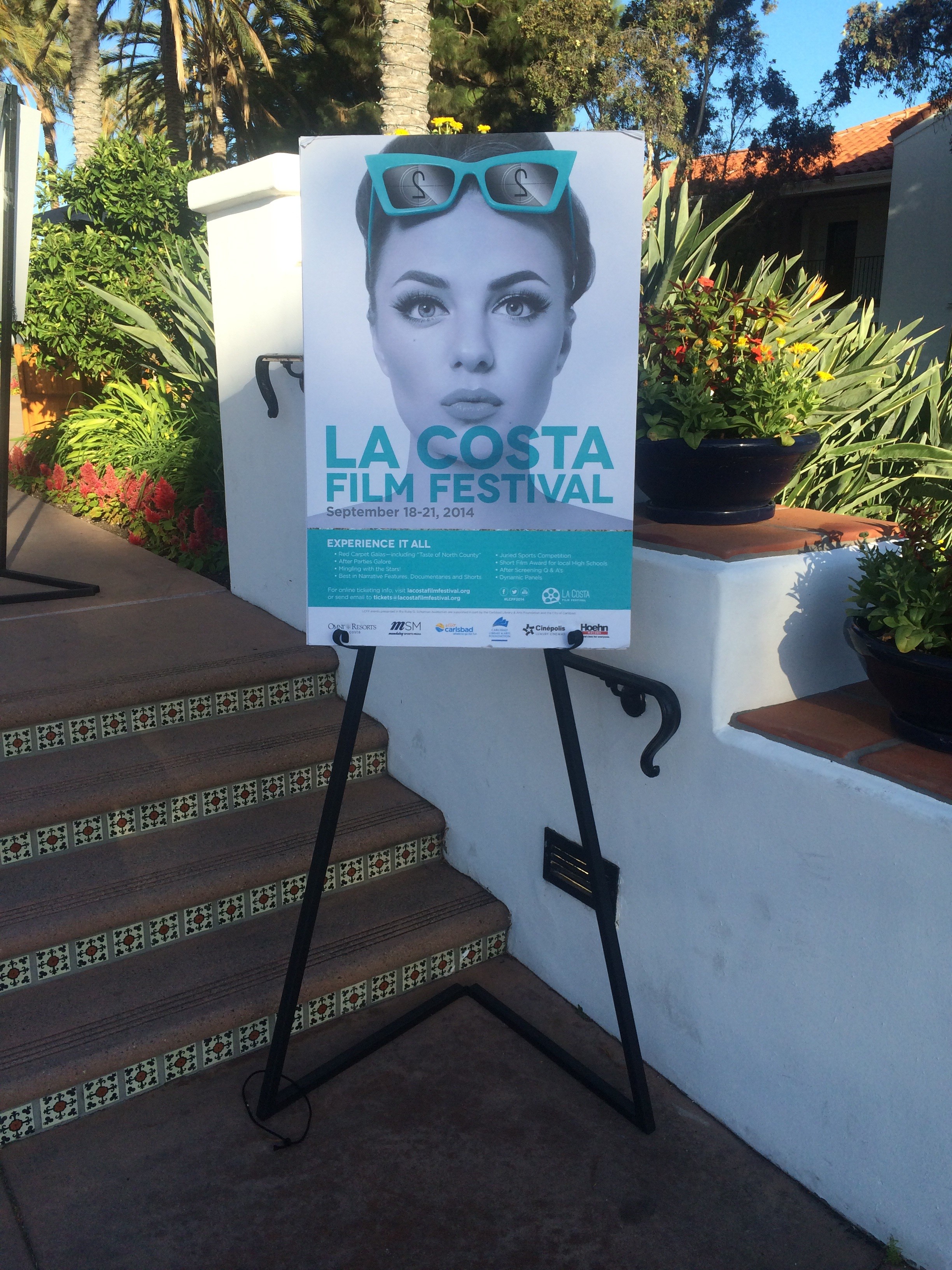 The Experience recently visited Carlsbad, California for the La Costa Film Festival. It’s situated in the rolling hills at the luxurious San Diego Omni La Costa Resort. The event started on September 18th and ended on September 21st. The Taste of North County kicked off the festival on Thursday. The opening night screened, ”Babe: The Women Who Changed Golf.” It was a great paring. There was golf, epicurean food and the relaxed atmosphere of La Costa.
The event that everyone was excited to see on Friday night was the Ed Harris tribute. Ed walked the red carpet at the near by Cinepolis Luxury Cinemas. Producer Mike Tollin was present. Cinepolis provided gourmet food. Local San Diego artist, Jeff Adamoff painted a cool tribute to Ed Harris and Mandalay Sports Media. The Ed Harris production that also starred Cuba Gooding Jr was “Radio” from 2004. Ed Harris spoke to the crowd before the screening. He asked who had already seen “Radio”. Many people had not and the audience was enthusiastic. After the screening, Ed Harris and Mike Tollin answered a few questions. One of the things Mike Tollin offered the crowd was, ”Try your hardest.” Ed Harris offered this advice, “Don’t believe anybody until you finish your movie.” When someone pointed out that it was a negative affirmation, Ed Harris said, ”Just do it.” After that, Ed Harris said, ”Everybody should watch Copying Beethoven! I play Beethoven!” Mike Tollin asked Ed Harris if there were any roles that he regrets not taking. Ed Harris said Stanley Kubrick had called him while casting “Full Metal Jacket”. He said Stanley asked him to play the drill sergeant but Ed Harris couldn’t see himself in that role and he turned the part down. Of course R. Lee Ermey who was a real life Gunnery Sergeant got the part and went on to get a Golden Globe nomination for his real life portrayal as the drill sergeant. After the Q and A, Ed Harris was presented with the first Legacy award from La Costa. The film festival presented him with a custom-made golf bag. Ed said he didn’t play golf but that the golf bag would inspire him to play a few holes.
The Saturday event at the Omni La Costa Resort was an interesting panel on America’s Obsession with Children in Sports. Mike Tollin from Mandalay Sports Media moderated the panel. Leigh Steinberg, legendary sports agent, and inspiration behind Jerry McGuire and Arliss also spoke. Tim Rummel from Esquire Network who has overseen development on “Knife Fight” and “Friday Night Tykes” was also on the panel.
After introducing the panel, Mike Tollin got right into kids playing football. Tim Rummel talked about 8 and 9 year olds training hard to have a chance at a sports scholarship or a shot at pro sports. Everyone agreed that these kids are under a huge amount of stress. Their bodies are showing signs of tendonitis and wear that is usually found in adults. Leigh Steinberg said that a lot of top-notch children athletes are often isolated by their families. They never experience every day things like dating, socializing or growing up. Mr. Steinberg mentioned a 13-year-old boy who had been recruited to play football at USC. His parents were spending $100,000.00 for one year of training. Leigh Steinberg seemed to have the most informed perspective. He brought up the NFL and the Ray Rice scandal. He said that the NFL has a lower incidence of domestic violence than the general population of the United States but that one case was too much. The topic eventually turned to concussions. Leigh said that each time a footballer lines up and crashes into another footballer, a micro pre concussion event occurs. By the time the child athlete has grown up and reaches college, they have had 10,000 of these events. This type of injury leads to dementia, Alzheimer’s and neuralgia.
Mike Tollin opened the panel to members of the audience. Two nine year old boys spoke about their love for paddle boarding. It was shocking to be reminded of how small and fragile nine year olds are. Another audience member was a retired doctor who spoke about medicine that is often prescribed to concussion suffers in the NFL.
The retired doctor used Junior Seau as an example. Junior Seau was a local San Diego pro footballer that had suffered four concussions while playing with the San Diego Chargers. He was prescribed medication whose “black box” side effect was suicide. Junior Seau died from suicide. The doctor suggested that people suffering from concussions should avoid medicating entirely.
The panel concluded by saying that something must be done about concussions in sports but nobody is sure what that is. Everyone agreed that children in sports are a dangerous business but its not going anywhere soon.