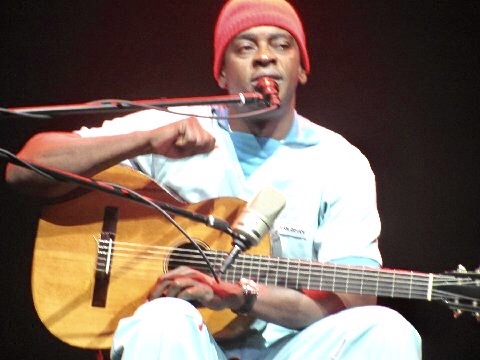 Los Angeles, CA (November 26, 2016) The Ace Hotel Theater is where a lot of great concerts are performed. It is the pinnacle of art deco theaters in downtown Los Angeles. The Experience Magazine was invited to attend a special performance by Seu Jorge. Seu Jorge is a Brazilian musician who had a close connection to David Bowie. Bowie once said,”Had Seu Jorge not recorded my songs in Portuguese, I would never have heard this new level of beauty which he has imbued them with.”

The David Bowie tribute by Seu Jorge recreated the set to the film “ A Life Aquatic”. It was elegant and made good use of the space. A giant projection screen behind the lone guitar player showed David Bowies face. Sue strummed his guitar and played familiar Bowie tunes while singing in Portuguese.

Seu Jorge is one of Brazil’s most talented singers. Known for his role in Wes Anderson’s “A Life Aquatic”, Seu captures Bowies energy while adding an International flare.

Wearing his iconic red knit hat from the film, Seu showed great emotional depth and handled some classic Bowie songs. “Rebel, Rebel”, “Ziggy Stardust” and “Suffragette City” were just a few of the tunes he covered in his tribute. The simple stage set up highlighted Seu’s guitar strumming. There was no back up band. The atmosphere in the theater was electric and magical. The Theater at the Ace Hotel is such a wonderful place to see live music. The sound system was dialed in.

The show was sold out and it was a pleasure to listen to the David Bowie tribute in such an iconic and memorable setting.

Check out the link to Seu Jorge performing at the Ace Hotel;