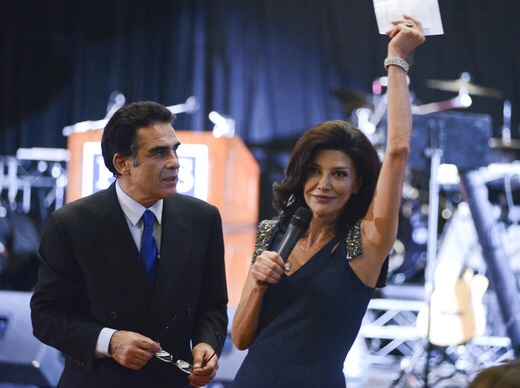 I had the opportunity to the cover the Pars Equality Center’s (PEC’s) first annual autumn gala at the Hilton Universal Hotel in Universal City. Over 350 influential and VIP guests from LA and the Bay Area gathered for an evening of festivities and celebration while raising awareness and funds for the Iranian American community in need, including social and legal programs. The Gala featured a live performance by renowned Persian band Black Cats. Formed in Iran in the mid-1960s, and having performed in iconic arenas across the globe, they are the longest-standing band in the Persian music industry. In addition to a silent auction, there was music, dancing, raffles, surprise guests, and a delicious Persian dinner and desserts catered by Badri Abrishami. Partners and sponsors for the Gala included Gail and Nariman Teymourian, Dr. Firouz Naderi, Dr. Pedram Salimpour, Farhad Mohit, Bobby Sarnevesht, Homa Sarshar and Shahrzad Ardalan, amongst others.
Masters of Ceremonies for the evening were Iranian actress Shohreh Aghdashloo, who was an Emmy®-winner and (“House of Saddam”) and Oscar-nominee (“House of Sand and Fog”); and her husband Houshang Touzie, an Iranian actor (“Argo”) and playwright (“Surprise Party,””From Satellite with Love”). Other VIPs in attendance include: PEC executive director Bita Daryabari, Shahbal Shabpareh and The Black Cats band (Parviz Bazmipour, Edvin Mohammadi, Ramin Zoka, Parham Bazmipour, Misagh Kashefi, David Montoya); actor Navid Negahban (Showtime’s “Homeland”); actress Saye Yabandeh (“5th and Alameda”); Asa Soltan Rahmati, Reza Farahan, and Adam Neely (Bravo’s “Shahs of Sunset”), .
PEC executive director and founder Bita Daryabari said, “We are honored to be working with the community in the Los Angeles area. With the great success of our sold-out annual Nowruz Galas in the Bay area, Pars Equality Center is excited to now also host an annual Autumn Gala for its supporters in Southern California. Whether its for American-born Iranians seeking help with securing employment or applying for college grants—or supporting the process to bring a dear family member over from Iran, we are here to help the entire community.”
“It’s amazing to be here. I wish there was a program like this when I came to the states,” said Negahban.
Founded by Bita Daryabari in 2010, Pars Equality Center (PEC) is a non-profit organization, and the first of its kind, supporting the full integration of people of Persian (Iranian) origin in the United States.
Those desiring to make a one-time or monthly contribution can text the word “PARS” to number 56512.

Here’s a video link about Pars and the great charitable work that they do;