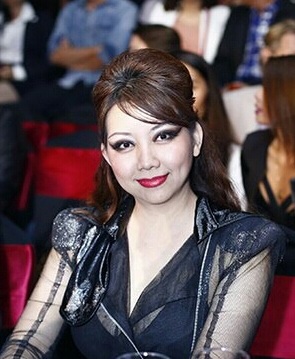 Quynh Paris’ Line is an Exotic Mix of East and West

I had the distinct honor of attending Quynh Paris’ vibrant and edgy designs at her Reef LA tent show at Style Fashion Week. Her designs are an eclectic mix of East meets West, and they are a nod to her exotic Vietnamese heritage, but also quite modern and futuristic. A graduate of the Mod’Art International fashion school in Paris, designer Quynh Nhu Nguyen launched her couture collection in Paris in 2011. Quynh Paris couture collections have been showcased in runway shows in Paris, Saigon, and Los Angeles, each season, since the 2011 launch. Every season, the couture collections explore a new theme, as she lets her multi-cultural artistic creativity express itself through volume, three-dimensional shapes, fluid movement, rich colors and intricate details.

Quynh Paris couture pieces have been worn by numerous Miss Vietnam winners and contestants, top models, international celebrities, and have been featured in numerous fashion editiorials in Vietnam and Europe. Also an accomplished violinist, painter, dancer, and gymnast, Quynh is a graduate of the HCM Academy of Music, and has a university diploma in Economics and Foreign Languages. Quynh lives a life steeped in music and the arts, as she constantly bridges East and West, old and new cultures, dividing her time between Los Angeles, Paris, and Vietnam. “Since I’m an artist, I like to show that aesthetic in my designs. I use mixed materials, even crochet, lots of vibrant color, shadow and curves in my pieces,” said Quynh. “Having Quynh Paris showing with us is such a great experience as she is a true artist and her talent really shines through in her pieces,” said Veronica Kerzner, founder and President of Style Fashion Week.

“Since I’m having a show in the US, I wanted to have more of an American feel to my show and have my line be more representative of the modern American woman. My designs for this show are more sexy and powerful, but also feminine with a futuristic edge as Americans are very forward thinking. When I design clothes for the Asian market, it’s still futuristic, but a bit more traditional and subtle,” added Quynh.

Quynh also draws upon the theme of nature in her work. “Since it’s the Spring 2015 show, I’m incorporating the elements of spring and nature itself. The warm and the cold, the light and the dark. Flowers blooming in the spring, but also the dark brown colors of the earth, said Quynh.

Quynh Paris brings together intricate assymetric constructions, richness of detail, and multi-cultural influences into its couture and ready-to-wear collections. The ready-to-wear collection of day-into-night dresses and separates features versatile, wearable, affordable pieces with a couture feel. Quynh is such a dedicated and inspiring artist. I truly get a sense of that in her designs.