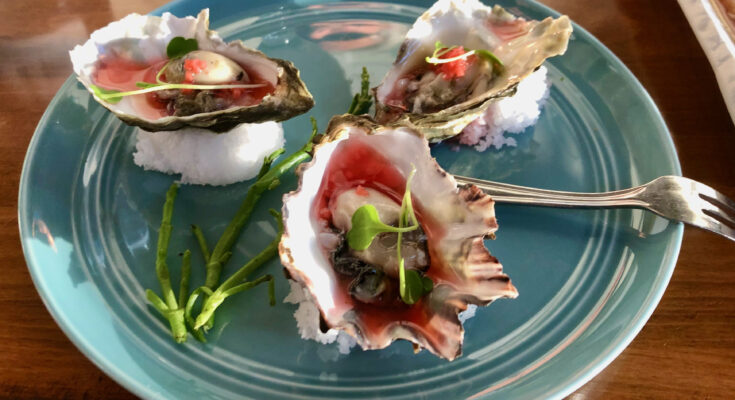 (EXPERIENCE MAGAZINE) — Los Angeles, CA — Friday, April 22nd, 2022 — DineLA for Spring 2022 was the first two weeks of April. Thank you to all of the restaurants that participated in our review of DineLA 2022. This is our tenth year covering DineLA. There are 300 restaurants participating in Restaurant Week DineLA. It’s such a fun way for people to sample gourmet food with a set menu at a reasonable price. What an amazing collection of dining. On April 1st, we started our DineLA experience at Lunetta All Day on the Westside, Stanton HB in the South Bay, and Tagine for amazing Moroccan food. During the fest, we dined at El Segundo hotspot Jame Enoteca, authentic Greek food at Mar Vista, Sol Agave for Mexican, Blazin Birds on the Westside for amazing fried chicken, Paul Martin’s in the South Bay,, Imari for Japanese cuisine, and finally City Tavern in Culver City. Wow! What an amazing collection of epic restaurants.

On Friday, April 1st, we started our DineLA experience at Lunetta. Chef Rafael and Chef Emilio put together a special menu for DineLA. Judging from the crowds that were present, many people in Santa Monica know how great Lunetta. There are some great spaces for dining. First of all, you can enjoy the dining room or sit on the back patio. You’ll need a reservation because every table seemed to be occupied with people sipping wine enjoying being outdoors, and eating great food. There is plenty of room if you’d like to bring your dog. There are several outdoor dining areas, and they can accommodate large groups.

The DineLA sampling that we had started with a Mushroom Cappuccino with a touch of black truffle. Delicious! The baby beet salad was out of this world. Beets, tomatoes, goat cheese and a housemate vinaigrette. Each bite popped. We were over the moon for the Beet Salad. Made with goat cheese and quinceThe second dish that we had that was simply sublime was the Spring Pea Risotto. The carrots and snap pea emulsion was dynamite. Thank you Lunetta All Day for making this night special. We love deserts and we love that DineLA has a little dessert on the menu. We tried the Lemon Pudding cake (YUM ) and the Chocolate Tart. Both delicious and fresh and not too big. Just the right amount of sweets.

Taverna at the Mar Vista

Do you like authentic Greek Food? In my opinion, this is the most authentic Greek food in Los Angeles. We stopped by Mar Vista and spoke with Dominic. He told us how the restaurant hit hard times during the pandemic and had to let the chef go. He said that the local Greek community would get together during the pandemic and make authentic Greek food for the Greek community. This food is so good. So pure. Rather than a fast food sort of Greek experience like gyros, Dominc has created a menu with food that the locals eat. Lots of fresh pitas dipped into housemade sauces. The central dish was the Horiatiki salad. This is the fresh onions, tomatoes, cucumbers, bell peppers, feta, olives and capers. I was dipping everything into the cucumber sauce. You really have to try it. The dining room is so open and spacious. It opens up onto sunny Venice Boulevard. Its a prime spot. All the food is perfect for sipping ouzo and drinking a cold beer. I tried the Saganaki which is the flaming cheese dish. The pita and the cheese, very tasty. I highly recommend. We also tried the Fired Smelts. They are addictive and perfect for drinking and eating something salty. I saw another table ordering the smelts as well. On the veg side, we tried Impossible Burger Mousasaka. The Moussaka is the dish with tomato sauce. There’s two sauces here, and both so tasty. For dessert, we tried the most autthentic of sweets, the Baklava. A delicious dessert. The pastry was flaky, sweet flavours going on. House made and so good. We had great time at dinner for DineLA. We look forward to going back to Mar Vista and seeing Dominic and the friendly staff at the Mar Vista.

On Tuesday, April 5th, we stopped by Jame Enoteca. Celebrity Chef Jackson Kalb (Top Chef) and his wife Melissa have put together a tasty $45 DineLA menu. Its really the perfect amount. Starter, Entree and Dessert. We had the Kale Salad for starters. Chef has the kale chopped up in bite sized morsels. He makes a sweet and spicy almond vinnegette and minced parm yum. The salad is California style. Really good. For the entree we had the Capellini. Its a specialty art Jame. I recommend the Capellini or the Chicken Parm. The Chicken Parm is very popular and they run out. The Brussels sprouts are masterfully made. There’s a touch of a sweet flavour but not overwhellming. It’s the schiaffoni dressing. You gotta try it if you’re a Brussels sprouts fan. The patio at Jame is packed. This is one of the few places to open during the pandemic. Its really added a lot of energy and vitality to downtown El Segundo. For dessert we had the Myer Lemon Pie. So good. I could eat an entire pie. We really enjoyed Jame Enoteca for DineLA Spring 2022. We look forward to stopping by in the future.

Chef Annalisa Mastroianni-Johnson has put together an amazing DineLA menu. The buzz about the fried chicken is true! This is fried chicken that Jonathan Gold would be writing about! I heard a rumour that Jenn Harris form the LA Times was at Annie’s Soul Delicious and she was posting on her Instagram about it! Well, I’m here to tell you, its true!

This is fried chicken that belongs in the LA Food Bowl! The big surprise for me was the cat fish. To be honest, I’m cutting down on fried food, but when I heard that we were invited to Annie’s Soul Delicious, I decided to chow down on the Fry! So the Catfish ~ YUM! You gotta try it, and the other thing that just blew my mind and is right out of a Soul Food Master Class was the Banana Pudding ~ Delicious! You have to get down to Annies Soul Delicious. The colourful drinks are full of flavour. The greens were on point. The portions were perfect. I really liked Annies for a guilty pleasure meal.

The Experience Magazine stopped by City Tavern in Culver City and what a delight. For DineLA, Chef Libre Arce put together a great selection of shared plates. Chef also loves preparing great vegetables plates. We went for the American Bistro experience with an Impossible Burger. It had Avocado, arugula, aoli, crispy fried onion rings and a brioche bun. It was great. We also sipped on Mojitos. Chef stopped by a busy dining room to talk about his vegetable tacos that he prepared and he said they are a big hit. We had Brussels sprouts for the side Yum. Also Chocolate brownie with Ice Cream.

We went to Imari on Monday night, on the 11th. The place was hoping. We sat on the patio and the dinning room was packed as usual. Imari is a great way for people who live in Brentwood to try amazing Japanese food. Imari offers an exclusive line of Japanese sake that you have to try. Smith at Imari knows what people need. He had a Spring Washoku Menu. It’s so tasty.

The DineLA menu was an $85.00 offering. We started with the Hiyayakko Tofu which is organic tofu done agadashi style. Really tasty. We also had the Grilled Gindara Cod. As we munched away we tried both the Tuna Avocado Roll and the Shrimp and Mentaiko Roll. Really amazing blend of flavours. Desert on the DineLA menu was Ice Cream with mocha and strawberry mmmm so good. Thanks to Smith for having us! You’re the best Imari! Arigato!

We went by Sol Agave in Santa Monica on April 11th. This was a $45 dinner on DineLA. We started with the Jalapeño Cream soup. Very tasty and not as much kick as I had expected. For entrees we tried the Pollo Al Gusto. This is a delicious chicken breast topped with avocado and rice. This is served with a delicious spicy mole and Serrano cream sauce. We also sampled the seafood enchiladas. Great sauces and the food is so fresh. We highly recommend Sol Agave.

We finally had the best fried chicken in Los Angeles. That was true last Saturday night when we stopped by Blazin Birds up on the Westside. Blazin Birds is dedicated to quality. Their chickens are 100% antibiotic free. This place a gem for Los Angeles. The fried chicken and waffles and syrup are high in things that are bad for you, but if you’re going to do it, you should go to Blazin Birds. We also tried the Chicken Wrap which came with some tasty pickles. The Root Beer Float was delicious!!!!I loved every gulp of it. The sauces were dynamite, the chicken is so fresh and tasty. This is on Wilshire boulevard near Hancock Park. Nice part of town.

Paul Martin’s in Manhattan Beach had a $45 offering for DineLA. Paul Martin’s in the South Bay is so nice with a large patio. The restaurant has classic Amaerican fare. The bar and the dinning room were packed. We tarted with House Salad and had a Mojito from the bar. For the main course, we tried the Brick Chicken with mashed potatoes that came with a savoury sauce that had bits of tomatoes in it. Also good was the Alaskan Halibut. Delicious snow peas and quinoa. The dessert was Butter Cake and it came with fresh berries. Paul Martin’s is American cuisine is set to a higher standard. Stop by soon and try their Happy Hour.

We stopped by Stanton HB for a unique DineLA experience. We had the Fanny Bay Oysters on a half shell. They had a delicious mignonette sauce. We also had the Aqua Chilli Scallops which were as tasty as they we’re picturesque. The burrata and Golden Beet Salad was a gourmet Californian salad. The Yellow Tail Crudo was really fresh with orange and Ponzu sauce. For entrees we tried the Thai Shrimp Bisque and the Grilled Brandino. The blend of flavours was amazing. It’s such a nice restaurant with a neighbourhood vibe. The Thai soup was ah-mazing. There was copious amounts of tasty shrimp, coconut, ginger, and lime. The Branzin was so fresh and blended the flavours snap pease and arugula together nicely.

Tagine in Beverly Hills is known for delicious Moraccan food. A Tajin is a North African dish named after the clay pit in which its cooked. The staff and everybody was so friendly. This is a hidden gem of Los Angeles. They have indoor and outdoor dinning and plenty of parking. This really blew me away. Amazing flavours. The DineLA menu was $55. For the first course we tried the Mezza of the House which amazing and the Bastilla Chicken. Really the flavours were just so fresh. There was a tiny shot glass with a small beet salad. Wow, I can’t believe how good it is and its just beets, cucumbers and tomato. The second course, We had the stripped Sea Bass and the Lemon Chicken Tagine. Amazing flavours. For dessert, we had the Chocolat Soup, oh wow, I highly recommend it. Tagine is a special place. Stop by soon and visit Tagine.