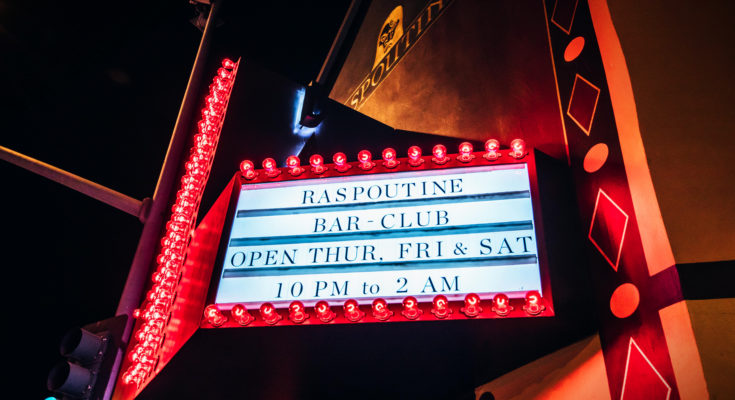 Raspoutine West Hollywood is French excellence personified by the savoir-faire of Alexander Ghislain and Logan Maggio. It is where the party spirit, the talent to be unique and the embodiment of chic evolve within a unique fur-lined, scarlet velvet, lace and bronze embroidery cadre.

Located at 8623 Melrose Avenue, the prestigious address is packed with Hollywood history. This was the place that received the first liquor license in Los Angeles in 1919 before transforming itself into a speakeasy, frequented by the cream of Hollywood when Prohibition was enforced. Raspoutine partners, Alexander and Logan, have transformed this historic address into a luxurious and unique venue on Los Angeles nocturnal landscape. Raspoutine is already known for its prestigious venues in Paris, Rome, and Marrakesh where offbeat sophistication and effortless distinction reign. Now the owners bring that sophisticated nightlife to West Hollywood with the same door policy and world class DJs, providing a sensual deep house musical atmosphere.

treats! Magazine events have become known to be synonymous with exclusivity and sexy sophistication, while catering to VIP’s creating an environment for them to feel comfortable in. With absolutely no press access allowed except one house photographer, guests and VIP’s feel relaxed, where the “happy few”, to use the expression of night owl F. Scott Fitzgerald, feel at home.

Doors opened at 10pm and a line quickly formed as guests arrived early in anticipation of the grand opening night.Malin Akerman was one of the first to arrive with her husband, Jack Donnelly and was seen on the carpet as the cameras were flashing. Inside, music by Zen Freeman, had the guests dancing and moving to the beat while treated with bottle service and specialty cocktails. Matthias Schoenarts was seen laughing and chatting with Treats! Magazine founder and editor, Steve Shaw.

Guests were admiring the unique, sophisticated, and sensual place with the same baroque-cozy-glamorous scarlet and gold decor inspired by the original creation of the artist, Erté, who designed the original Raspoutine in Paris 53 years ago.

As the night continued, Rachel McCord and Lady Victoria Hervey arrived looking excited to join in on the opening event. Rachel was wearing a sheer open two piece outfit and and seen dancing and laughing with friends.

With a packed house, the Los Angeles elite partied into the early hours of the morning, living up the decadent name Raspoutine clubs have become famous for.