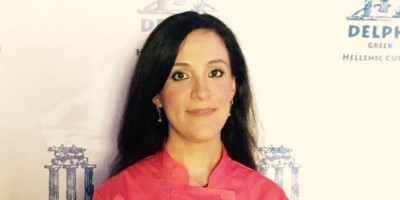 Award-winning Delphi Greek Signature Pastry Chef Rana Pourarab launched her new line of tasty cheesecakes, CookChe at the popular Westwood restaurant. The West Los Angeles Chamber of Commerce co-sponsored the event with over 200 guests in attendance. Roozbeh Farahanipour, the president of the West Los Angeles Chamber of Commerce and owner of Delphi Greek restaurant was in attendance as well as chamber board of directors Elham Yaghoubian, Steve Little, and Greg Martayan. The launch was a huge success with local media outlets and recognition of the Chef’s talents taking center stage.

“The cheesecakes are a new dessert line specifically for Delphi Greek in the wonderful city of Westwood, which will be a much sweeter place because of it. Delphi just added these wonderful cheesecakes to our exclusive catering menu,” said Farahanipour.

“We’re so proud that the chamber co-sponsored the event. Many local community leaders came to support Rana’s and Delphi Greek’s sweet endeavor,” he added.

Chef Rana, who originally hails from Iran, launched the brand CookChe in order to showcase her passion for the sweet, rather than the savory. “Dessert is the cherry on top of a fabulous meal. Most Chefs pour their efforts into an entree and dessert plays second fiddle. We fill that void, providing for a dessert that can stand on its own.” stated Chef Rana.

On hand during the evening ceremonies were prominent representatives from the City of Los Angeles. Los Angeles City Councilman Paul Koretz presented the chef with a well deserved Certificate of Recognition marking the launch of what is slated to be a national brand of cheesecakes. Chef Rana’s passion is two fold, taking into account her global technical training in the culinary arts, as well as the fact that she has created the only brand of cheesecake that utilizes exotic spices. Chef Rana’s cheesecakes fall in line with the concept of farm to table as well, because the fruits she sources from local farmers markets when available. The talented  chef will continue to grow her brand, CookChe, beyond cheesecakes, however they will remain the mainstay of the parent company.

Chef Rana was quite honored by the commendation. “It’s a wonderful feeling to be awarded for doing what I love to do. It’s really a dream come true for me,” she humbly said.

“It may sound odd, but each cheesecake I bake is like a child to me, in that I put great care in making each one. It’s truly from the heart that I bake these cakes,” she mentioned.

As for her favorite variety Chef Rana added,”I love the saffron and pistachio cheesecake. I know cheesecake isn’t a Persian dessert, but I wanted to add a Persian twist to it. Actually all the cakes have Persian names and the saffron and pistachio is called the Kasandra cake. Kasandra was an ancient Persian queen who was the wife of King Cyrus. The most popular cheesecake though is the chocolate variety and that one is called the Artemis cake, named after the fearless woman warrior.”

The first “cheese cake” may have been created on the Greek island of Samos, so it’s fitting that Delphi Greek has such a large selection of extraordinary cheesecakes. Physical anthropologists excavated cheese molds there which were dated circa 2,000 B.C. Cheese and cheese products had most likely been around for thousands of years before this, but earlier than this goes into prehistory (that period in human history before the invention of writing) so we will never really know. In Greece, cheesecake was considered to be a good source of energy, and there is evidence that it was served to athletes during the first Olympic games in 776 B.C. Greek brides and grooms were also known to use cheesecake as a wedding cake. The simple ingredients of flour, wheat, honey and cheese were formed into a cake and baked – a far cry from the more complicated recipes available today.