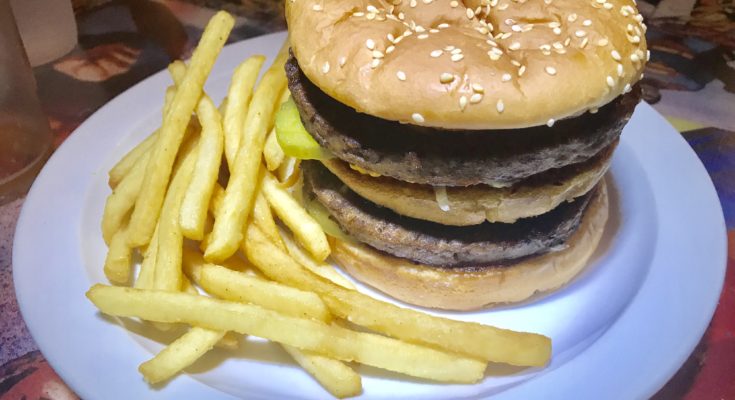 (EXPERIENCE MAGAZINE) – Vegan comfort food in Hollywood! With great joy and enthusiasm, the Experience Magazine was invited to sample a few of the classics at Doomies’s in Hollywood. This is the place for vegetarians, vegans and anyone really to try food vegan comfort food. The food at Doomie’s is all vegetarian, but its made to look like meat.

Doomie’s can be hard to find. It’s located at Fountain and Vine in Hollywood and tucked into a two story strip mall. Inside is set up like a diner with booths and tables in the dining area. The place gets packed. Hollywood is so busy, and the night we went was no exception.

We wanted to try a sampling of the best things on the menu. There are many popular items; the Big D burger, Pulled Pork sandwhich,  burritos, tacos, Philly cheesecake and crispy fries. The fried chicken is also very popular.  There’s also one of those space age Coke A Cola vending machines that was pumping out ice cold soft drinks.

We decided to try a sampling of the appetizers. Each one was amazing and tasted like the meaty item they were coping. The chicken wing was spot on. Tasted just like crispy chicken. We also had a fried shrimp. I really thought it was shrimp. I thought maybe they had just fried up a shrimp and served it to us. Our server reassured us that everything at Dommie’s is vegan.
The top seller for sandwiches is the Big D. This tastes exactly like a fast food burger. It even has the onions cut up in the same style that fast food chains have. There’s an in house made secret sauce and even two patties. The flavor is so familiar! If someone ate this and didn’t know any better, they would swear it was a beef burger from a fast food chain.

We also just had to try the pulled pork sandwich. This one nailed the pulled pork sandwich experience as well. Made from soybeans and mushrooms, the texture is so close to pork. The barbecue sauce was delicious and it made the flavor of the faux pork taste like I was at a barbecue shack in the middle of the south. Many vegan restaurants have the same sauces as Doomie’s but they don’t bring out the flavor like they do at Doomie’s.

I was so full after eating our tasty pile of vegan diner food. Our server mentioned that Chef Franck makes the deserts every day and recommended we try at least one desert. We tried a piece of carrot cake. It was so good. I could barely finish it.
Doomie’s  is such a treat. I’m so glad I know where this place is in Hollywood. Doomie’s keeps late hours and is often open until midnight. I’m looking forward to stopping by again for a burger and fries at Doomie’s.