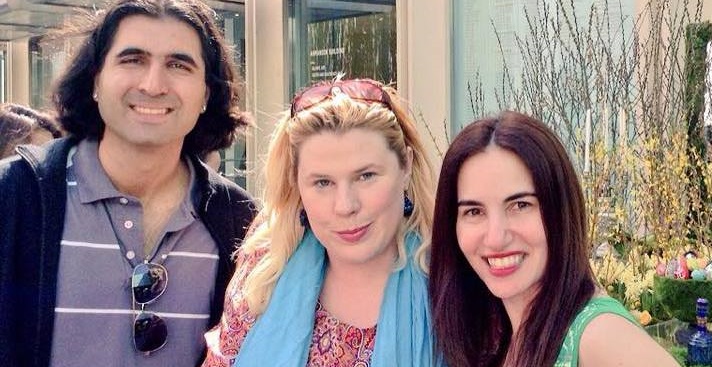 On Sunday, March 22nd, the Farhang Foundation hosted its 7th annual Nowruz (Iranian New Year) celebration at the Los Angeles County Museum of Art (LACMA). There was a Haft-Sin Display, Storytelling, Calligraphy & Puppet Show for Youth, a screening of the top 6 films that were a part of the Farhang Short film festival. There were traditional Persian dancers and
the World Premiere Performance of “The Sounds of a Persian Spring” by Zohreh Jooya. There was also a traditional Iranian costume parade and a live outdoor concert by the popular band Kiosk.

In addition to all these festivities, there was also a backgammon tournament that Farhang co-hosted with the Persian Academic and Cultural Student Association (PACSA) at USC proudly co-hosted a first of its kind Backgammon Tournament during Farhang’s 7th Annual Norouz (Iranian New Year) Celebration at the Los Angeles County Museum of Art (LACMA).

My cast mates from Seeking Valentina and I made an appearance at this noted event to ring the Persian New Year.

“I think it’s more important than ever that everyone make an effort to learn about the rich culture of Iran and it’s resilient people and the many trials they have endured for centuries.  As the producer and lead actress of Seeking Valentina, it’s been my privilege to work with a host of talented Iranian-Americans on this film and engage with the warm and welcoming Persian community,” said Kristin West, star of the eponymous film.

“As an Iranian-American, who was born and raised in North Carolina, I was so impressed and proud to see a noted museum like LACMA, which is in the center of Los Angeles, shut down to honor our ancient holiday, exposing it to a more diverse audience. I’m used to celebrating Norouz back home in Winston Salem and Greensboro, which is much more low key as there is an infinitely smaller Persian population in those cities than out here,” said Armin Nasseri, writer and director of Seeking Valentina.