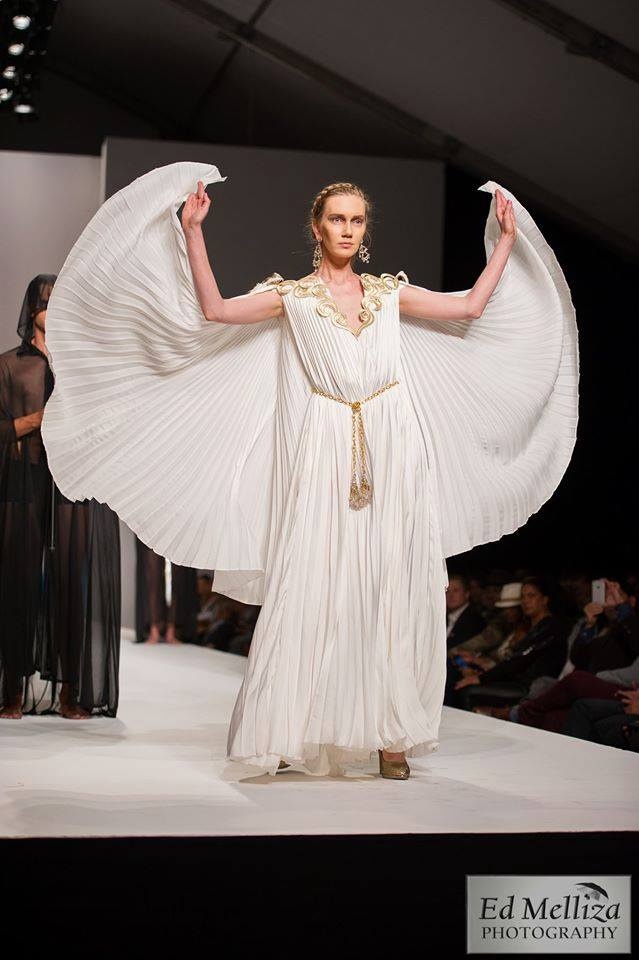 I’ve covered so many shows in such a short period of time this season at LA fashion week, so my head is still spinning, but I will say there were many standouts and great designs. In addition to a legendary, iconic designer like Sue Wong to Quynh Paris, a very avant-garde designer, there was all sorts of other styles represented by various designers.

“This presentation was very LA, but I liked it,” said Victor Quintero, director of Houston and Dallas fashion weeks. Quintero was right. While there were bikinis and some casual fashions on display, overall I was very impressed.

One standout was Dar Sara. With her electrifying gold, gold and more gold, designer Joumana Al Hayek brought a glittery sparkle to LA fashion week. I loved the tutus, the bustier tops, the incorporation of brocade, and the gold chains that were reminiscent of the big 80’s, but in a cool updated way. It was very much in the vein of “Dynasty,” the popular nighttime soap of the era but with a very edgy and modern twist.
Alexis Monsanto was great as well. Be it fun and flirty casual or flowy and fancy evening gowns, he was spot on. I could totally see his dresses worn anywhere. From Coachella to the Oscars. How many designers can say that?
Last but certainly not least was Skin Tone. I really liked their casual, but super stylish line, which is all crème colored and perfect for spring. “I’m excited to be at LA fashion week,” said Romeo Foxx, wardrobe stylist for the line. Tixxi Reena, who had her bright handbag line featured during Skin Tone’s show echoed Foxx’s sentiments. “It’s the perfect collaboration…to have my colorful bags with the beautiful and elegant neutral dresses Skin Tone has.”
There were great vendors there as well. Brittany Belz of Voyage Clothing said, “It’s great for networking with stylists, photographers and great for exposure to get the line out to the public. I started in fashion when I was 13. I always knew I’d become a designer and by 25, I launched my own business.”
Mathew Westray of Foxbait summed it up best by saying,”It was so fun and awesome.”
More info at http://www.darsara.com/, http://www.alexismonsanto.net/, http://www.skintone-clothing.com/, www.voyageclothing.com, and www.foxbait.com