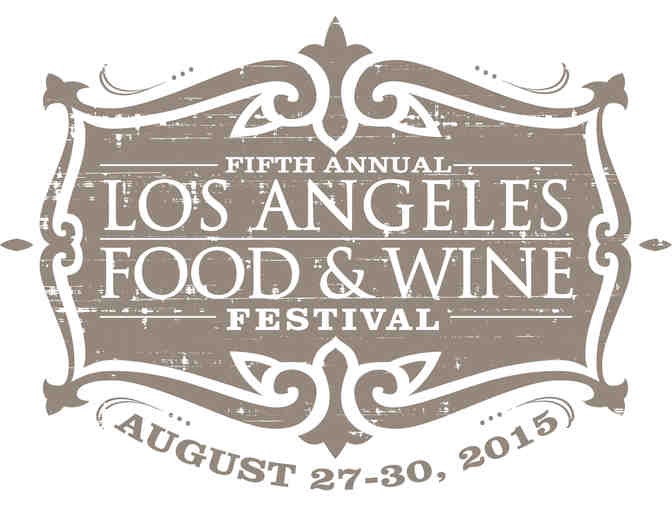 It was a hot and exciting night on Friday, August 28th, when Tyler Florence hosted the Lexus Night Market. The fifth year of LA Food and Wine showcased the finest cuisine Los Angeles had to offer while showing the talents of today’s most illustrious chefs, winemakers, and sommeliers. This all took place in the heart of downtown Los Angeles along Grand Avenue.
There’s really no event like this in the world. Celebrity chefs, beautiful people, and a huge red carpet with the back drop of the Walt Disney Concert Hall.  As soon as I arrived I was offered a gourmet Roasted Beet Tortellini by celebrity chef Bruce Kalman. Chef Bruce is at Union in Pasadena. What a great way for a Santa Monica native like Erwin to sample one of Pasadena’s top restaurants. Because quite frankly, who wants to drive to Pasadena for dinner? I sure don’t. Chef Bruce created the bite with lemon, poppyseed and fennel. The taste was subtle and nuanced with just a touch of fennel.
Our next top bite of the evening was Chef Patrice Martineau’s Citrus Marinated Hamachi. This was a one of a kind bite that mixed purple potato date salad with Jalapeño and ginger salad. The spicy flavor made the fish taste slightly Southwestern while still raining in the sushi realm. What a treat. Year after year, it’s the fresh fish offerings that stand out at LA Food and Wine. This dish did NOT dissappoint.
The staff at the Experience Magazine was instantly tweeting and posting the pictures on social media using #LAFoodWine and @LAFoodWine. The event was taking place in Los Angeles and instantly being seen all over the world.
Of course there was so much wine. I started with a Chardonnay from BRAND out of Napa Valley.
Ed Fitts and his life partner Deb Whitman have developed BRAND Napa Valley. Since its inception, they’ve committed themselves to producing world class wine from their 12 acre vineyard, underground cave and state of the art winery located on Pritchard Hill, California. The elevation of 1600 feet is key to giving their grapes that sophisticated taste. Under the direction of winemaker Philippe Melka, BRAND is establishing itself as one of Napa’s top vineyards with wines that have a fruity yet powerful taste. This is one of Napa’s up and coming labels. Try some to see what the buzz is all about.
I thought the top taste from Napa was the Cabernet Sauvignon from Barnett. Hal Barnett created this vineyard and winery in 1983 with the intent of producing small amounts of hand crafted Cabernet Sauvignon wines from his estate. Since the first vintage of Barnett Vineyards, Spring Mountain has claimed its own AVA and become known as a unique microclimate, producing exceptional Cabernet Sauvignons and Merlots. As far as Cabernet Sauvignons go, this one is the top. It has a taste that stands up year after year.
I also couldn’t help but try some French Champagne. The first brand was Gonet Champagne. Founded in 1802 by Charles Gonet, this family-owned Champagne house has been producing award-winning estate grown Champagnes for seven generations. The Gonet family owns one of the biggest ‘Grand Cru’ Vineyards in the ‘Cote de Blanc’ region of Champagne in France. The taste is complex with a light nose. This high end Champagne was the surprise taste of the evening.
I had to sample the Heidsieck champagne. Founded by Charles Heidsieck in 1851. “Champagne Charlie” was a true pioneer and early entrepreneur. An early believer in extended periods of aging on the lees, his style lives on in the highly praised Brut Reserve. The taste is light and a bit sweet. A great champagne for any occasion.
There were so many gourmet bites and tastes at this year’s LA Food and Wine. We can’t wait to cover EVERY night next year and provide the coverage that an event like this deserves.