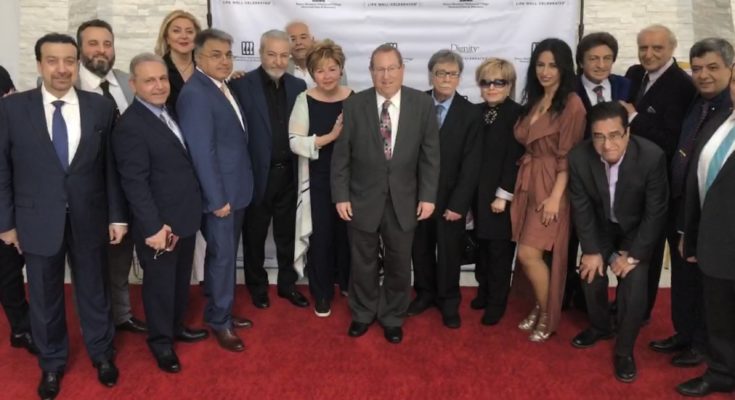 (EXPERIENCE MAGAZINE) On Friday, April 5th, the Los Angeles City Council recognized and celebrated the life of Hayedeh. Hayedeh was one of the most popular singers of the 20th century in Iran. She sang classical music, folk and pop. A Persian friend once told me, if you were going to take a road trip with your family, Hayedeh is who you would listen to for the entire trip. Los Angeles is home to the largest population of Persian people outside of Iran. Many of the entertainers, family and community members associated with Hayedeh are people who are still affected by the Iranian revolution. Hayedeh fled Iran in 1979 and moved to Los Angeles in 1982.

Hayedeh passed away in 1990. Her music and legacy live on. So many people love Hayedeh and her large family who live in Los Angeles. Mahasti was Hayedeh’s younger sister and also a singer. Mahasti sang Persian folk and pop music. Mahasti was intered at Westwood Village Memorial Park Cemetary. Mahasti’s daughter is Sahar. Sahar was present for the  Hayedeh Fan Club event.

Each year, in early April, near Hayedeh’s birthday, people from all over the world get together for a celebration of Hayedeh’s life. The Second Annual Celebration of the Pop Singer Hayedeh, was held at Pierce Brothers Westwood Village Memorial Park. Many people, luminaries and celebrities are interred here. LA City Councilman Paul Koretz from the 5th district spoke to the gathering about Hayedeh’s mesmerizing voice and her importance in the Persian community. Mr. Koretz went on to say that Hayedeh was one of Iran’s best known soprano singers of all time. “Her voice and range continue to enchant Iranians and Farsi speaking people from all over the world. The generous love and unending accolades transcended her status to an international icon.” Paul Koretz said that even though he doesn’t understand farsi, “It’s easy to fall in love with her harmonious voice and get lost in the beautiful music.”

Mr Koretz also said, “Hayedeh lived in Los Angeles from 1982 until the end of her life. The growth of the Iranian community here in Los Angeles, due to the increasing number of people fleeing Iran due to the revolution, bolstered Hayedeh’s career in the 1980’s. That’s  why 29 years after her passing, it was my honor to recognize her on Friday in our meeting of the Los Angeles City Council. The 5th district, which I have the honor of representing, is home to the largest population of Persians in Los Angeles. The Persian community is a robust, thriving immigrant community that helps make our city great.” Paul said that he knows that Hayedeh’s music will continue to be loved for generations.

A few of the legends of Persian music were also in attendance. Many luminaries from the Persian community walked the red carpet in the chapel.

Hassan Sattar is an Iranian singer who sings classical and pop music. Sataar was a Pahlavi Royal Family court singer until the revolution in 1979. Morteza Barjesteh, who is known as Morteza, is an Iranian pop singer-songwriter and composer who became famous in 1980s Iran.

Rastin is one of the creators of the Taraneh Nouvin sound. Taraneh Nouvin means “new sound” in Persian. This sort of Persian pop music is made by people living outside of Iran. Rastin who was born in Tehran was raised in Sweden. Rastin is known for having a captivating voice with a political message.

Arash Avin was in attendance as well. Arash Avin has released a dance album called Safar. Even though dancing is still illegal in Tehran, this album is very popular. Singer-songwriter Jamshid Alimorad came to pay respect to Hayedeh. He has a Persian pop song called “Irane Man” which means “My Iran” in Persian. This is a great song.
The Experience Magazine looks forward to next years Annual  Hayedeh Fan Club Celebration.