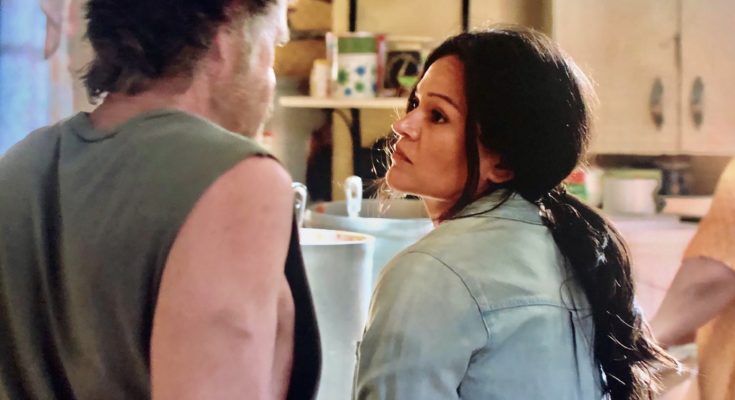 (EXPERIENCE MAGAZINE) — Los Angeles, CA — Tuesday, December 17th, 2019 —  Season 10 of Shameless premiered on November 10 with most of the cast returning to the series joined by some new character additions to the storyline. Actress Vanessa Lua, is one of those new faces, casted in a recurring role as Aunt Telma opposite Chelsea Rendon’s (Vida) character, Anne Gonzalez.
In this role, Aunt Telma will have to bear witness to her niece’s side hustle and relationship with Carl (Ethan Cutkosky) and will have to keep some Gallagher secrets of her own. Aunt Telma will also get some Frank Gallagher (William H. Macy) action of her own which will spice things up and add to the crazy shenanigans that we have grown accustomed to seeing from this family over the past years.
“The main cast was very generous with Aunt Telma and I felt welcomed from the first moment I walked on set. William H. Macy directed “Sparky” (Episode 05, Season 10) and when he walked me through our scene together, I could just see his passion for it and it just clicked for me that he knows this show and the char​acters better than anyone else,” shared Vanessa.
“Shameless” season 10 airs Sundays on Showtime at 9 p.m. ET/8 p.m. CT, with a repeat at 11 p.m. Shortly after airing, episodes will be available to watch on the Showtime website, app and Amazon Prime and Hulu plug-ins.

Vanessa Lua is a bilingual actress and producer best known for her work on the award-winning comedy Anchor Baby. Other acting credits include Michael Bay’s The Last Ship, and Stuck in a Fairy Tale. Her production credits include the feature documentary Comedy House, and the stage play American Man Dream, in which she also wrote and performed.

Vanessa  is the creator and host of the YouTube channel “What the hell did she say?” in which she interviews celebrities with her iconic pink iPhone on the red carpet. Vanessa studied improvised comedy at the Dallas Comedy House, IO West and the Groundlings, and completed acting studies at Actors Comedy Studio and with Margie Haber.