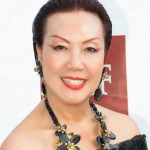 Iconic and award-winning fashion designer Sue Wong opened up Art Hearts Fashion LA Fashion Week with her breathtaking MYTHOS & GODDESSES Fall 2015 Collection. Sue’s mantra is Beauty Magic Transformation and this show was definitely all that and more. This sold out show was standing room only and the hottest ticket in town. While it was by far the most crowded and packed fashion show this roving reporter ever attended in recent memory, I was so impressed that Los Angeles (and So Cal in general) a city known for it’s “fashion” template of blue jeans and T-shirts, brought so many rabid haute couture fashionistas in need of their upscale and super glam Sue Wong fashion fix. It was THE can’t miss show of the season.

“I was curious to see what her designs are this season. Sue is such a distinctive, intrinsic and artistic person,” said Ronn Moss, star of the Bold and the Beautiful.

“I’m wearing Sue Wong and I’m so excited about her show. She is a lovely lady and I love her fashions,” said Moss’ wife, actress Devin DeVasquez who paired her outfit with a vintage inspired Betsy Johnson cap.

“I felt like I got some amazing images from this wonderful fashion show. I got some epic shots of Madame Sue Wong’s magical designs. I call this series, the Super Models Float on a Cat Walk of Thin Air,” said celebrity photographer Winston Burris of Burris Agency, who supplied the photos for this article.

Sue’s fashion is so intoxicating I heard one actress-model attendee say, “even though I’m heartbroken that my boyfriend broke up with me last night after 6 years…I put myself together and just had to see Sue’s show. I can feel bad and grieve for months starting tomorrow, but tonight, I wanna surround myself with beauty.”

Known as the “Queen of Beads,” Sue’s show was a whirlwind of elaborate beading on flowy and feminine gowns making the models with their embellished headdresses look like ethereal creatures.

Sue insightfully shares, “It’s not just a gown or mere fashion. I create an experiential transformation, awakening the inner goddess within every woman who wears a SUE WONG.” Sue’s ethos is about Goddesses and their representational archetypes. Paying homage to her three patron Goddesses, Sue explains: Aphrodite: I am an advocate of Love and I create Beauty; Artemis: I’m a fierce warrior-goddess cutting my swathe through the world; Athena: I’m a seeker of truth and wisdom. Each SUE WONG gown represents an archetypal feminine goddess. MYTHOS & GODDESSES is a timeless fashion slipstream into antiquity, catapulting it into the present and creating trend-setting gowns of utmost feminine sensuality and empowerment; as Sue expresses: “I mythologize my gowns through these Goddess archetypes.”

To quote Nigel Patrick Daly, OBE, former Chairman of the Board for BAFTA/LA: “Sue Wong is a magician, a high priestess able to transform women into Goddesses. She transports us back to an age of glamour and beauty. Timeless and majestic, she makes women look simply spectacular.”

MYTHOS & GODDESSES is apropos theme for Sue’s show this season. This particular theme is an odyssey of personifying archetypal embodiment–Pele: Goddess of Fire; White Tara (the Eastern derivative of Aphrodite: Love, Beauty and Compassion); Athena: Goddess of Wisdom; Artemis: Warrior Goddess of the Hunt; Gaia: Goddess of the Earth. These are profound portals of healing that help define different aspects of the Eternal Feminine. Sue really incorporated the goddess theme in her exquisite line this season. Each gown she designs represents an archetypal feminine goddess. When a woman wears one of Sue’s original gowns, it involves a transformative process of transcending beauty. Symbolism and character are embedded in her elegant and regal gowns imbuing the creation as a multi-dimensional, sculptural art piece in motion.

There is also a distinct femininity in her line that brings out every woman’s inner goddess to the forefront. Sue’s mantra is Beauty Magic Transformation and is definitely describes how it affects any woman who wears her beautiful gowns.

Inspired by the glamorous golden age of silver screen sirens, Sue incorporates that with modern day style. “I would like to think that when a woman puts on a Sue Wong, she is magically transformed and is connected to her ultimate divine goddess.” Indeed!