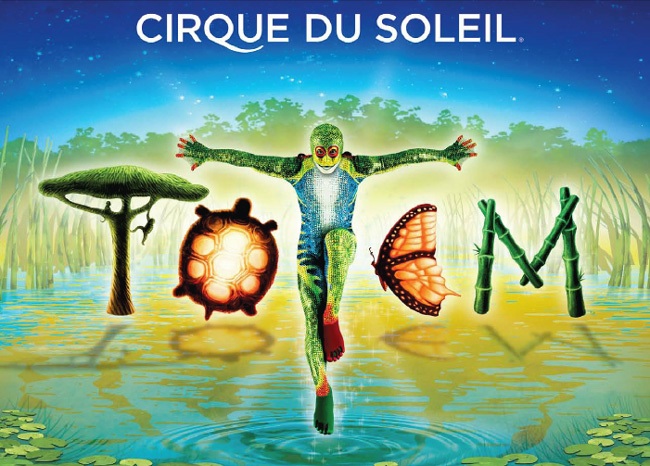 TOTEM is the new Cirque du Soleil show that’s playing on the beach near the Santa Monica pier.  This show is amazing. Tracing back evolution to water born life, it follows mans journey up to manned flight. It does this through reinterpreting early myths. Instilling what it must have must have been like to see Buffalo Bill’s Wild West Show. Acrobats, jugglers and comedians make for a show that has no official language. The performance itself becomes that language. Adding to the atmosphere is a top-notch professional band that plays live during the entire show. A totem pole is often filled with myths. The thunderbird and crow are often at the very top.  TOTEM doesn’t disappoint. If you’re lucky enough to see Pipo Crotti in the role of the MC it will be a performance to remember. The MC is an important character in a Cirque du Soleil show. The performance pivots around him.

The Crystal Man first appears up in the ceiling. Slowly, he floats down to the stage.

To say there are acrobats and people flying is an understatement. There are latex cloaked figures scurryingaround an elevated jungle gym.  This turtle shell looking set piece is called the Bars. It’s an amazing feat. They are suspended above the stage by a few cables.

The Fixed Trapeze Duo is just stunning. The people in the crowd were just blown away. Totally transformed by the spectacle. At one point, the trapeze duo hangs by nothing but their heels. There’s nothing but the hard stage below.

The Foot Juggling act comes out as to Crystal Ladies who shimmer like two Martians from a weird David Bowie music video. The best way to describe this act is to say that many shinny items are spun and juggled by foot. It’s a rhythmic and glittering show.

The hand balancer does incredible contortions that allow him to stay balanced while holding impossible positions.

Myth. The Hoop Dancers seem to harken to a day of old Wild West Shows. The hoop dance has its own language.

Telling its story of life and death.

The manipulation act features an Uncle Sam scientist character that is part WC Fields juggler and part vaudeville musician.  Juggling lit up balls that seem to represent molecules of nuclear energy or the planets.  The scientist comes off with a memorable performance. Looking like Walt Whitman in his laboratory of color and life.

The Roller Skaters took my breath away. Circling tighter and tighter. They perform on a platform that looks like a drum and must be six feet wide. Truly amazing. The crowd was enthralled.

The Russian Bars are a unique addition to TOTEM’s acrobats. Flinging themselves into the air with great ease, the jumpers defy gravity.

The Unicycle and bowls is the real stunner.  The performers are each dressed in skin color outfits that harken ton African tribe. Their unicycles are extremely tall. From this impossible position, the performers catch metallic bowls on their heads without using their hands.

The show closes with the Crystal Man. He waves to the crowd like a futuristic hero.

TOTEM is a celebration of the circle of life. It uses the human body to perform the story of evolution that is inherent in all of us. This show is purely entertaining for adults and children.

One special mention of the stage must be made. Cirque du Soleil is always on the cutting edge in stage design. And this stage is no exceptions. Projecting images that interact with the actors in real time. This makes for an exciting spectacle.