Acclaimed fashion designer Eugene Sidney is at it again. This maestro of fashion design is now orchestrating an amazing lineup of live blues performers at Xen Lounge in Studio City every Wednesday night. Celebrities, well known musicians, beauty queens, tastemakers and prominent members of the press were all in attendance to show Eugene and the talented musicians their support.

One of the attractions of the event was the wonderful performance of actor and blues singer Roy Lee Jones. “My inspirations are Howling Wolf and Muddy Waters as well as Albert King.” As to how hard it is to perform the blues, he added,” Singing the blues gives me relief from sadness. It’s a great way to get it out of your system.

Wine sponsor for the event, Adu Jahmal added,”It’s beautiful to be in the company of such beautiful people.” Jahmal comes from a long line of relatives all in the wine business all the way back to his great-grandmother who had a distillery in Tuscaloosa, Alabama. As for his favorite variety of his wine, Jahmal enjoys the Bordeaux Blend.

As to why he took on yet another venture, Sidney said,”My friend Craig Nobles, who is the face of my line, brought me in to promote this event. I’m looking forward to this new enterprise.”

Craig Nobles is the CEO of Swagg Media and also the face of Eugene Sidney’s line of high end slippers. “These kinds of events are amazing. I represent the most powerful social media influencers on the planet, so it’s nice to bring these people together.”

As for being the face of Eugene’s brand, Nobles added,”I really believe in Eugene’s talents and I really like his designs. I believe that Eugene Sidney is the next great American designer. He’s bringing classic American style back,” he added.

In a town known for its T-shirts and blue jeans, with the exception of awards season, only a whimsical artist like Eugene Sidney can help foster the elegant looks of the golden age of Hollywood into our modern times. 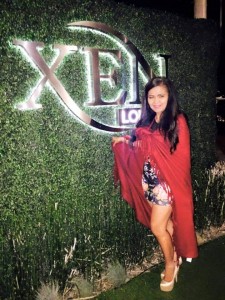