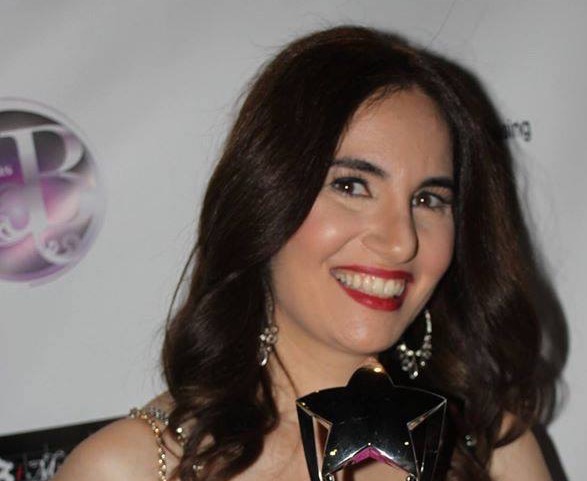 June 18, 2015 – WESTWOOD, Calif. — Roozbeh Farahanipour, The Chamber’s President and the owner of Delphi Greek, which is located at 1383 Westwood Boulevard, will be bestowing this honor upon Vida. “As a journalist, I have always loved covering events in the West LA area and love the sense of community there. I am so honored to receive this commendation from Roozbeh and the Chamber, especially since it’s one of the largest and oldest Chambers in Southern California, and because they are so community minded,” says Vida.

In addition to distinguished Chamber members and government officials, numerous celebrities are scheduled to appear in support  of Vida’s event such as Legendary Oscar winner Margaret O’Brien ( Meet Me in St. Louis, Little Women), President of the Southern California Motion Picture Council and actor Randal Malone (Dr. Jekyll and Mr. Hyde, Dahmer vs. Gacy), Legendary actor James Hong (Kung Fu Panda 3, Mulan), Kate Linder (The Young and The Restless), Bai Ling (Crank: High Voltage, Finding Julia), John Blyth Barrymore (Mansion of Blood, Mata Hari), Reatha Grey (Off Their Rockers, Legendary Iranian actresses Apick Youssefian (The Keeper: The Legend of Omar Khayyam, Cry of the Village) and her daughter Mary Apick (Homeland, Price for Freedom), James Wilder (3 Holes and a Smoking Gun, Melrose Place), Film Composer David Raiklen (Mia, A Dancer’s Journey, Space Command Redemption), actor and journalist Harrison Held (Jimmy Kimmel Live, Hollywood Icons) and Rob Roy Thomas, TV showrunner (Free Ride, How to Cheat on Your Wife), creator of the “soft scripted” method, are scheduled to attend.  Because of Vida’s long standing relationship with the fashion community, designers such as Sue Wong, and Sonia ETE, Edison Cortez of Thomas and Edison, Shekhar Rahate, Julia Clancey and Rita Mezrahi of Claires Collections, are also scheduled to turn out. This star-studded event will also have royalty in attending such as HH Prince Maximillian Ferdinand Von Anhalt of Germany and HH Prince Mario-Max Schaumburg Lippe, Nachod of Germany, and HRH Qajar Persian Princess Mandana FarmanFarmaian. and others will be there to show their support to Vida, who will have influential and well regarded international, national and local media covering this event.

In addition to being a very successful journalist and a HPC founder, Vida is best known for her apperances on the television comedies, Mind of Mencia and The Mindy Project. She will soon be seen in the films Pond Scum, Natural Born Killers, Seeking Valentina and Strangers in a Book. She is also about to launch her own blog about entertainment and fashion, So Very Vida.More about Vida at http://www.imdb.me/vidaghaffari