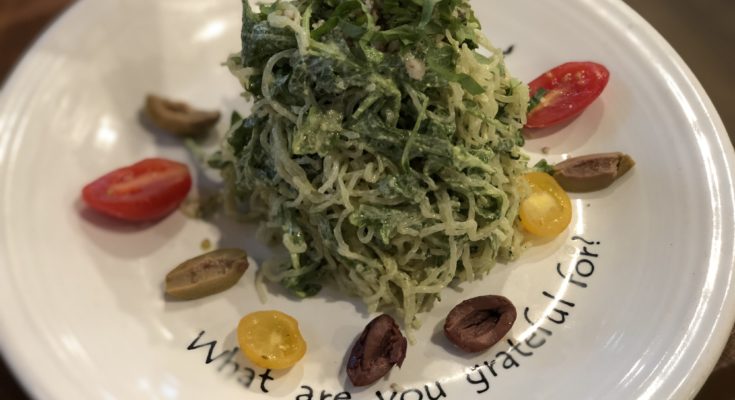 (EXPERIENCE MAGAZINE)  — ARTS DISTRICT  LOS ANGELES, CA — Cafe Gratitude has a downtown location that is becoming a must see in the restaurant world. Located in the Arts District in Los Angeles. The downtown Cafe Gratitude is just a short walk away from the iconic Angel Brewery and Little Tokyo. Downtown Los Angeles has been going through a transition of late.  As recently as the 1990s, there were very little restaurants or bars that were even in the downtown area. It was ghost town after 9:00 PM. That’s all changed. A top notch vegan spot like Cafe Gratitude is what the downtown area needed. Featuring delicious vegan organic food and delicious  smoothies, Cafe Gratitude still serves their food with an inspiring message with each dish.

As we arrived for dinner on a Friday night, the crowds of patrons filled up the dinning room, the luxurious bar and the hip outdoor patio. Our server Danielle was very knowledgable about the menu. She suggested a few appetizers and let us know about the new handmade cocktails that Cafe Gratitude is now offering.
Danielle’s suggestions were perfect. We started with the Eclectic ~ Barbecue Cauliflower and the Brilliant ~ Young Coconut Ceviche. The cauliflower is so tasty. It’s a bit filling. I wanted to keep eating it, but I noticed that the Ceviche had an incredible taste. This vegan Ceviche features avocado, squash a touch of lime, and is topped off with coconut bacon (they don’t serve meat at Gratitude so its vegan inspired bacon) This was my favorite starter. I have to say, however, that I’m a sucker for French Fries. The Intuitive ~ French Fries came out hot and crispy with a spicy cashew aioli. I could’ve eaten another serving of the fries. So tasty.

I have to mention that the SF Mission Burrito is a classic dish if you’re going to try something at Cafe Gratitude. The burrito blends mushrooms, guacamole, a cashew nacho cheese, black beans and brown rice. I didn’t try a burrito on our last visit, but this is usually what I get if go to Cafe Gratitude. It’s a great way to sample the fresh ingredients that Gratitude is known for.

I asked Manager Pennie what was new at Gratitude and she told me about the new cocktails that are available. This is a great idea of fortified wine mixed with fresh squeezed juice. I had a Mojito Prosecco Spritzer. Wow this was good! It paired well with the Buffalo Cauliflower. Gratitude uses locally sourced produce, housemade syrups, shrubs, tinctures and bitters. We also sampled a Blue Spirulina drink. Mixing fortified wine, blue spirulina, pineapple juice and coconut milk. It’s a striking looking drink and delicious to sip.

Chef Dreux Ellis is an icon in the world of raw, plant based fare. He and Cafe Gratitude are known for their legendary veggie burgers, the burrito, and so much more. For the vegan crowd, varying one’s diet and trying new combinations is an important part of eating vegge.
We had such a good time sampling the menu at the downtown Cafe Gratitude. The building is located in the trendy Arts District. We walked over to Little Tokyo which is just a few blocks away. There are several locations for Cafe Gratitude in Los Angeles. Check out their website to find a location near you.