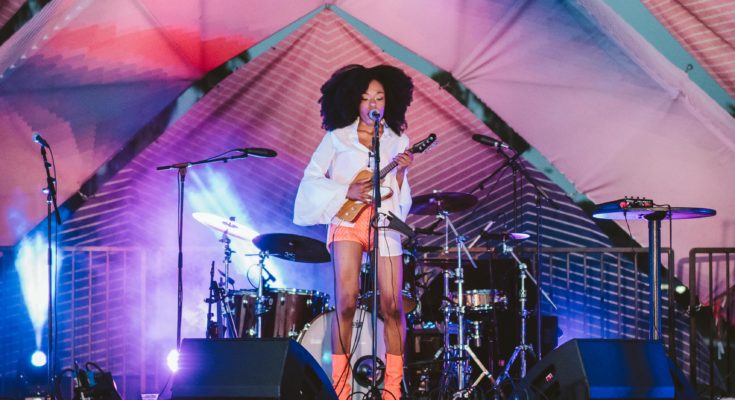 (EXPERIENCE MAGAZINE) — SANTA MONICA, CA — Twilight on the Pier was a six week long event on the Santa Monica Pier on the edge of the Pacific ocean. Held on Wednesday nights from September 5th through October 3rd. This year’s finale was on Sunday, Oct 7th. The Santa Monica Pier is iconic and has been featured in countless movies. The theme for this year’s Twilight on the Pier was “Local Meets Global.”Executive director of the Santa Monica Pier Corporation, Negin Singh, has been making changes and creating a really relaxed vibe at the Pier. They’ve added bag checks and walk-through security systems at all of the entrances. This allows them to control how many people get on to the Pier at once. Also, once people are in the event space, they can roam freely and find all the art and different stages around the Pier. They set up one stage on the Pier Deck, one at Pacific Park (the amusement park on the pier), and one at the very end of the Pier, known as the West End. Guests could walk around to the different stages to catch the live music. There were so many bands, it’s hard to mention all of them. Here are a few of our favorite bands from this outdoor music festival.

The first set of concerts for was on Wednesday, September 5th. The event was called Latin Waves. On the Main Stage were ORQUESTA AKOKÁN. Akokan is a Yoruba word used in Cuba that means “from the heart.’ The Yoruba religion is based in southwest Africa. Orquestra Akokan’s music is a saxophone and horn section extravaganza. It was a lot of fun to watch them play on the Main Stage. On the West End Stage for the first night of the series was QUITAPENAS. This Afro-Latin band takes its name from the phrase, “to remove worries.” The idea is to dance with their Peruvian, Columbian, and Brazilian sound and forget your troubles while you do. The music was rhythmic and the crowd gathered around them as they played. The new arrangement of having three stages allows people to listen to great music, eat some tasty food on the pier, experience art, have a drink, dance and explore the Pier and all the amazing views.

September 12th was the Australia Rocks the Pier. On the Main Stage was Betty Who. This Australian synth-pop singer sang her hit, “I Love You Always Forever.” Rising Australian pop star from Sydney, Cxloe, was entertaining the crowd on the West End Stage. This stage that’s located at the end of the Pier is a unique space that is basically above the Pacific Ocean. Back on the Pacific Park Stage were the Australian post punk band Death Bells. Hailing from Sydney, this band plays a sort of dark and morose sort of music. It was interesting to watch people interact with this kind of alternative and dark music featuring a blonde heartthrob lead singer. 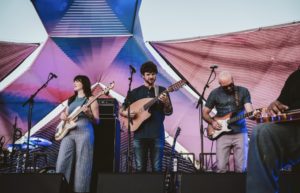 Wednesday, September 19th was Island Vibes. Legendary reggae and soul queen, Judy Mowatt performed. Known for being a member of Bob Marley’s band, she does an amazing cover of Bob Dylan’s Knocking on Heaven’s door. This was one of my favorite performers from this years line up. The musician’s that play with Judy Mowatt are so professional. They were in the groove and people were loving it. DJ Danny Holloway played Steel Drums on the Pacific Park Stage. This created an island vibe for sure. 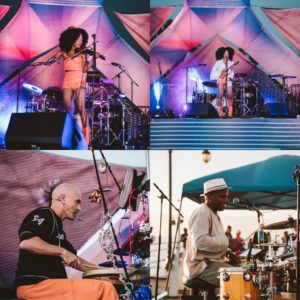 October 3rd was Afro-Beat and R & B night. Fela! The Concert is a musical performance inspired by the uplifting Fela Kuti. Also on the Main Stage on October 3rd was TGooch. this American singer, songwriter and producer hails from Inglewood. The crowd really enjoyed her performance. On the Westend stage was the Twilight Drum Circle. Their infectious grooves made people dance. This was a professional level drum circle.

On the night of the Afro-Beat concert, we stopped by the Albright which is located near the Main Stage. The Albright restaurant is a longtime staple on the Santa Monica Pier. Yunnie and Greg Morena are the couple who own and operate the Albright. They believe in running a sustainable business that supports other local businesses and vendors. The Morena’s were the first on the pier to “go green.” There’s nothing like a combination of a casual and simple restaurant where a you can sip on a cold beer and eat delicious sea food. A few of the the items that The Experience Magazine sampled during the concert were; The Fish Tacos, The Fish and Chips, the Poke and the Veggie Burger. Each dish was reasonably priced and the taste was on point. The location of the restaurant on the Pier is just incredible. We sat on the back patio and watched the concert get going. The sun was setting and we tried a few of the draft beers. The beer was nice and cold. The music sounded great. The Albright also hosted some really cool art installations during the Twilight on the Pier.

The final concert for Twilight on the Pier was on Sunday, October 7th. This was the South Asian Sounds Night.  They featured Bollywood performers and DJs who played fresh cuts from from Afghanistan, Pakistan and Sri Lanka. It was so cool to hear the different rhythms from around the world right on the Santa Monica Pier.
The Experience Magazine looks forward to Twilight on the Pier ~ 2019!