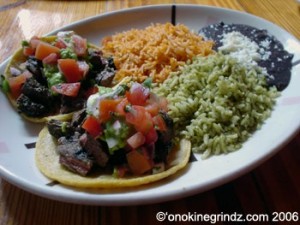 Tacos at the Border Grill 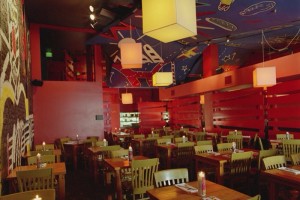 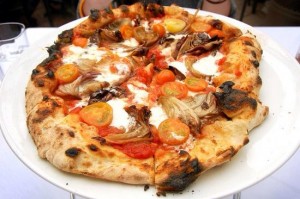 DineLA Restaurant Week 2014 was held from January 20th-January 31st. It was a twelve day event featuring some of Los Angeles’ best restaurants. It featured a prix-fixed menu that highlighted the particular restaurants signature dishes. The Experience was able to stop by The Border Grill on 4th Street in Santa Monica and Areal on Main Street. We sampled items from the DineLA menu. The Border Grill was featuring fresh made non-alcoholic drinks on their lunch menu. We tried the mango juice. It was great. The DineLA prix-fixed menu didn’t offer a salad or soup for starters. Instead, they suggested empanadas. We tried the veggie empanadas and the shrimp empanadas. The presentation was impressive. The taste was amazing. I think these are the best empanadas that I’ve ever had. The Border Grill knows how to make Mexican food without smothering it in shredded cheese. The tastes and flavors are light, but distinctly Mexican. We ordered entrees that came with beans and rice. We tried the Veggie tacos and the Lamb belly tacos. The Veggie tacos were potatoes and white beans with just a touch of cheese. The Lamb tacos had braised lamb that was delicious. The tacos are a great way to eat lamb. The black beans and rice were vey good. The Border Grill is a great spot to go to lunch in Santa Monica. The interior is painted in a unique Mexican graffiti style. There are masked Mexican wrestlers playing guitar, comets and other fun things painted on the walls. The atmosphere is fun and festive. Also on the DineLA menu was Caramelized Jumbo Sea Scallops. The scallops are cooked with smoked jalapeno hummus. I’d like to try this dish on my next visit. The Tempanillo Braised Short Rib Enchiladas come with handmade flour tortillas. Also fresh Granny Smith Apples and caramelized pearl onions. This is a signature dish at the Border Grill. For dessert, DineLA Restaurant Week at the Border Grill offered Flan De Coco or Chocolate Tamale. The Flan de Coco has coconut caramel and coconut crust. The desert was delicious and not too heavy. DineLA Resturant Week at The Border Grill was a great way to try out this restaurant. I had never dined here before. It’s a great location with a helpful staff. I recommend The Border Grill for lunch or dinner when your in downtown Santa Monica. The Border Grill 1445 4th Street, Santa Monica, California 90401 (310) 451-1655 bordergrill.com Areal A long time hang out for Los Angelenos is Areal. Located on Main Street in Santa Monica. Areal recently took place in DineLA Restaurant Week. Its prix-fixed menu featured a three course lunch or dinner. Starters were a Romaine salad with Prosciutto. It had a light dressing that was delicious. We also tried the split pea soup. This was also fresh and delicious. Areal has a great selection of salads. Such as the Raw Kale salad. Ingredients like fennel, radish and ricotta salata. Also good are the Caesar Salad and the Roasted Beet salad. For the entrée, we tried the wood burning oven Greek pizza. We had them prepare a veggie pizza. The crust was cooked perfectly. The pizza came with marinara sauce, artichoke hearts and olives. I have to say, this is some of the best pizza that I’ve had in Los Angeles. I enjoyed the warm winter day on Areal’s outdoor patio. The manager, Amy, came out and was very cordial. She pointed out how proud Areal is about their front patio. It’s a spacious spot that has designer lap blankets and heaters if it gets too chilly while you’re enjoying your meal. The patio at Areal is a great spot to get away from the hectic rush of Los Angeles. DineLA Restaurant week has gatherted together over two hundred top restaurants in Los Angeles. Although I have been in Areal before, the DineLA menu allowed me to try new items that I hadn’t noticed before. One of the highlights of this visit was the desert. We tried the Desert Trio. It came with a Baked Apple pie cup that was hot and really tasty. There was terramisu and a Chocolate Canoli. It was all very good. The staff at Areal is very helpful. We recommend Areal for lunch or dinner. Areal is located at; 2820 Main St, Santa Monica 90405 (Btwn Hill St & Ashland Ave) DineLA Restaurant Week is such a wonderful way to try out LAs best restaurants. The Experience is grateful to the Border Grill and Areal for their participation in DineLA Restaurant Week 2014. We look forward to next year!