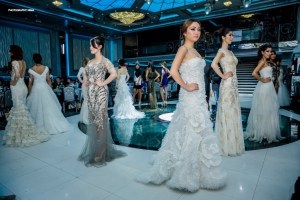 I recently covered the International Fashion Supermodel Grand Final at the Bellaire Banquet Hall in North Hollywood. “We’re connecting east to the west to the fashion and beauty world,” said Lousine Karibian, CEO and president of the World Networks.

Haute couture designer Garo Hzor’s designs were featured in the show. “All of the designs in the show were mine. It’s great to be a part of this great event as it’s an international crowd with international fans and it’s a very worldly event,” As for his upcoming line, “I’m so excited for my new collection. All the Swarvoski crystals, lace and the corsets.”

“I’ve been a judge in the past for various pageants like National American Miss and a couple of Indian pageants. It’s something different than designing and producing my own events,” said prominent designer Shekhar Rahate. As for what he’s got going on currently, Rahate said,”Awards season is coming up. I’m busy with planning for the Golden Globes and the Oscars and I’m working on my next collection. I just presented my spring/summer 2015 line and am prepping for fall/winter 2015.” As for what inspires him, Rahate replied, “women.”

Jerome Dean, who has performed at the Montage sang at this event. “It’s a great feeling to be a part of this wonderful event. Such a good energy out here tonight and I’m meeting so many nice people.” I will be singing songs that range from Frank Sinatra to Motown to Lionel Ritchie to Pharell and Bruno Mars,” added Dean.