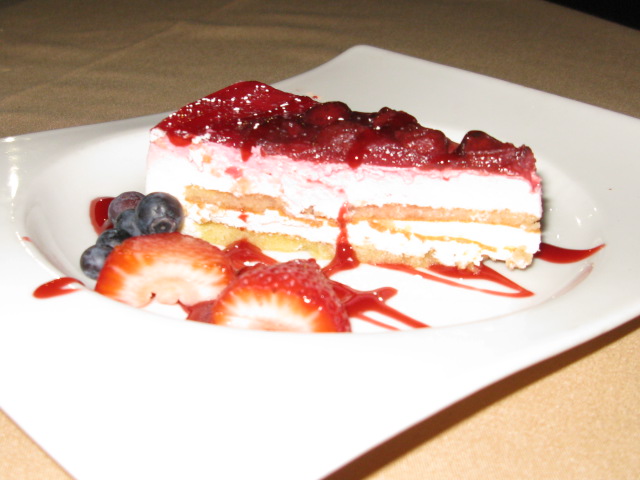 The Experience Magazine was so lucky to be invited to La Traviata Restaurant Bar and Lounge in the historic Wilmore building located in downtown Long Beach. This five star restaurant is a Long Beach legend. La Traviata is often referred to as the best Italian restaurant in Long Beach. A unique restaurant and bar that offers affordable dining with gourmet faire. Located on Third  Street and Cedar Avenue, the Wilmore building has Avant Guard designs built in 1926. The high ceilings and arches have an Old World feel. Like you’ve been transported to another country. The atmosphere at La Traviata is laid back with a European flair. There are operatic tapestries on the ceilings and walls which go with the La Traviata theme. Yet  the vibe of downtown Long Beach is still present. People stop by for a drink after work, or enjoy a casual dinner with drinks and good conversation.

When we arrived on a recent spring night, the bartender, Jaime, was creating cocktails for many guests. The bar remained busy the entire night. Some dinners ate in the bar, while others ate in the comfortable dinning room. La Tarviata has plenty of floor space. There is a large dinning room in the back that is rented out for events and parties. The banquet area has a sound system, a TV and Wifi throughout the space. There is live music in the restaurant on Fridays and Saturdays. These are the busiest nights at La Traviata.

Owner and operator, Mario, met us in the bar and recommended we start our meal with a cocktail. Jaime the Bartender whipped up a couple of handcrafted Moscow Mules and told us the history of the Moscow Mule. Jaime said that the Moscow Mule, also known as the Vodka Buck, was created in the 1930s in the United States during a vodka craze. A salesman was looking for a way to sell vodka and thus, the Moscow Mule was born. The popularity of the Moscow Mule took off and eventually vodka became the preferred spirit in the United States and replaced gin.
As we sipped our Moscow Mules in the bar, we just had to try a few items off the bar menu. One of the more creative items was the Warm Olives. These Italian olives were warmed in a touch of Olive Oil with Garlic Chili Flakes. This item was from the $5 Happy Hour menu. It combined some unique flavors while having the addition of being warm. These olives melt in your mouth.
From the Appetizer menu, we sampled the Tuna Tartar. With just a touch of habanero peppers, the tuna was tasty and went well with the fresh avocado. Mario stopped by and gave us the history of the Wilmore building. He said that this retail space has been many different stores and restaurants over the last hundred years. Mario took over twenty years ago with the introduction of La Tarviata.
We moved into the dinning room and sampled a few of the entrees. In keeping with our tradition at the Experience Magazine, we stuck to vegetarian items. Chef Trinidad Betencourt has created an amazing gourmet dish with the Kabucha Ravioli.

A sort of Pumpkin Ravioli, this dish was sweet without being overwhelming. There is a subtle orange taste combined with a hint of ginger.

We also sampled the Lobster Tortellini which has a tasty, homemade cream sauce. Chef Trinidad knows how to make affordable gourmet dining. La Traviata is the affordable luxury dining secret of Long Beach.
Our meal featured many gastronomic dishes. Our server, George, recommended we try some dessert. We settled on the Cheese Cake Monterrosa. Again, Chef Trinidad creates a real treat. Mascarpone and Ricotta are the cheeses in this dish. Mascarpone is an Italian cheese made from cream. I love learning new things from dining. The Cheese Cake Monterrosa was light and not too heavy. A tiny layer of sponge cake separated the Mascarpone and the Ricotta.
The staff at La Traviata was so knowledgable and helpful. This unique five star restaurant in Long Beach is a favorite of the gourmet dining crowd. Such distinctive flavors and tastes. The atmosphere is so special and inviting. Plan on an extrodinary night of dinning when visiting La Traviata.