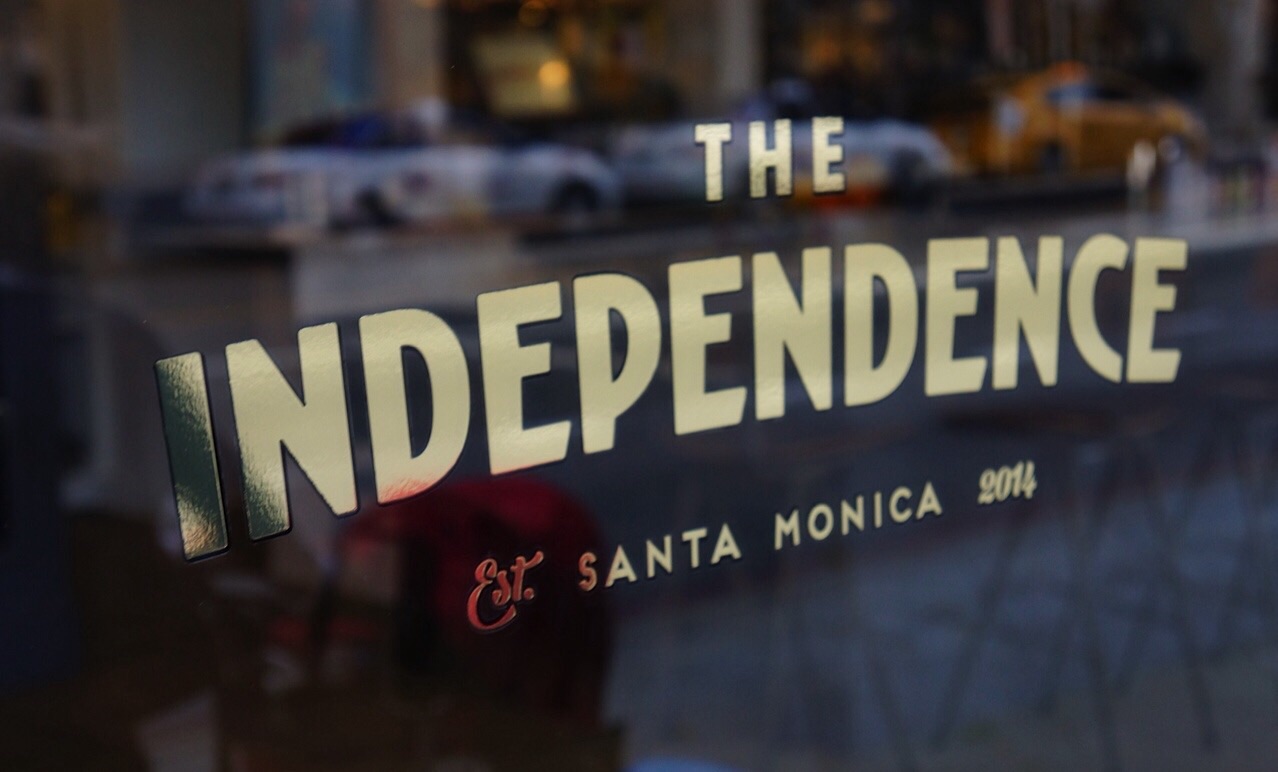 We just had an incredible dinner at The Independence. It’s near the Third Street Promenade in Santa Monica. Manager Tatia Oshidari rolled out the red carpet for us. It’s really amazing what they’ve done with the space. Formerly known as Buddha’s Belly, The Independence is the collaboration between owner Jonathan Chu and Chef Tom Block.  Chef Tom oversees the menu. Tatia is the General Manager for the restaurant and the bar. Vincenzo Marianella is in charge of the bar. The bar is a great addition to this space. People working in the area can stop by with coworkers or enjoy California Modern cuisine.

One of the eye-popping elements of The Independence is the giant urban murals done by John Park. The space has a vibrant energy that is good for taking iPhone photos. The space’s design is so inviting. The giant windows that look out onto Broadway are great for people watching. The ocean is visible to the west.

Our server Rob recommended the Sawtelle off the drink menu. It featured Citron vodka, fresh kumquats, blood orange, homemade honey-ginger syrup and Curtis lime bitters. This was a handcrafted cocktail. It was delightfully fresh and crisp. I was surprised at how the ingredients combined together. It was so tasty I ordered another.

Chef Tom really goes above and beyond at the Independence. It’s one thing to eat at a restaurant where a chef is over seeing the menu. Chef Tom is involved with the creation, the presentation. The farm to table approach supports sustainable, delicious gourmet food. He occasionally delivers the food to the table himself. Originally from New York City, Chef Tom passionately spoke to us about each item we tried.

The Chicken wings with salsa verde were one of the more striking dishes. Baked and then flash fried, the green chicken wings were a conversation starter and an epicurean delight. I think they may be the best chicken wings that I’ve had in years. Chef Tom makes many items in house every day. The pasta is hand made daily.

The chopped kale salad we tried was subtle and had different textures. He used iceberg lettuce, smoked egg, blood oranges, baby carrots, green beans, feta, candied walnuts and lemon mustard vinaigrette. The blood oranges neutralized the vinegar. There was a sweet and sour taste. It was a very original dish.

The oysters on a half shell were presented in a gourmet manner on a tiny bed of salt. The taste was fresh with just a hint of the smoked salmon roe. I think there was also a tiny bit of apple, which complemented the oyster’s flavor.

My personal favorite of the night was the Roasted Wild Mushrooms. The mushrooms were served on a toasted brioche. On top of this was a poached 62-degree egg and yuzu kosho hollandaise sauce. The presentation was stunning. This is true gourmet food. I highly recommend this dish! The brioche is handmade each day. It was light and flakey.

The stuffed Idaho trout was our main entrée. I don’t think I’ve had stuffed trout before. It was prepared perfectly. It was crispy. The almonds accented the fish’s flavor. There were also green beans and a kaboocha squash puree.

We also tired the Arrancinin. I have to recommend it.  This has butternut squash, short grain rice, taleggio fondue, honey, sage and apple. The apple and the sauce was just perfect. I really liked the Arrancinin. You must try it!

We had such a good meal at the Independence. The entire staff is just a pleasure to dine with. They know what they’re doing and look like they’re having a lot of fun doing it. If you’re in Santa Monica try to stop in at The Independence.