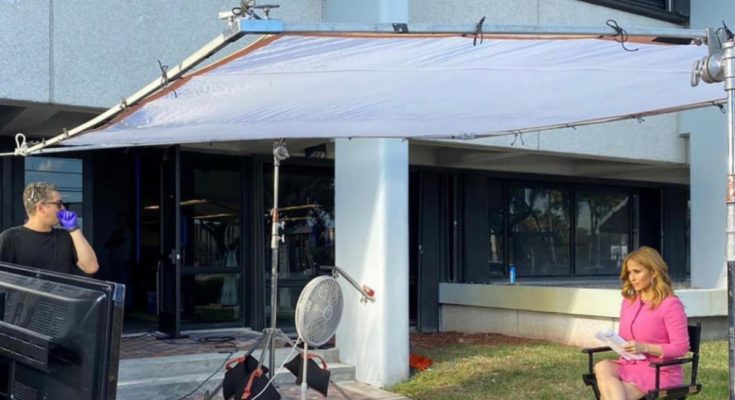 Miami, FL (March 27, 2020) – Emmy-nominated TV anchor Jackie Guerrido of the popular news show Primer Impacto had to broadcast live from a make-shift set in a parking lot after a colleague tested positive for

Covid19. The show’s official Instagram account posted a photo with a caption that read “Today the coronavirus took us out of our newsroom and studio. We are broadcasting live from a different building with Jackie Guerrido to keep bringing you the most accurate and reliable information.”

Guerrido, who is also a radio host has been recording her spots from home. “Not in a million years, we would have thought we were going to experience this. The coronavirus situation has made us take a second and a third look at life–slow down and think about what’s really important. I always promote positivity on my social media and on air. I have discovered an extra layer which pushes me to keep on going to do my job as a journalist, without fear”said Guerrido via phone from the Univision studios in Miami.
Jackie Guerrido has been a force on television for over a decade. She was nominated for an Emmy Award for Outstanding Coverage of a Breaking News and “Unidos en el Dolor: Huracán María en Puerto Rico (United in Pain: Hurricane Maria in Puerto Rico.) Today she is the only anchor at Primer Impacto during the Covid19 pandemic.
Guerrido was born and raised in San Juan, Puerto Rico where she received her elementary and middle school education. After graduating from high school, she moved with her family to the Bronx section of New York City. Before Guerrido worked in the media, she had shown interest in other areas of work such as acting and performing.
Her first break came at WSKQ‘s morning show, El Vacilon de la Mañana (“The Morning Zoo”), from a producer who heard her doing a voice-over. She soon received an offer from WRMA (106.7) in Miami,which she accepted. Guerrido settled down in Miami and she joined the HBC Radio Company, after working at “Romance” for a year. There she was given the opportunity to co-host a radio program with the duties of broadcasting news and traffic conditions. Eventually, she was given her own music show at WRTO (98.3). She also landed a job in television as a traffic reporter for WSCV, Miami’s Telemundo affiliate, working for both the radio and television at the same time.
It wasn’t long before Univision took notice of Guerrido and made her an offer to become the meteorologist for Al Amanacer de Noticias 23 (“Morning News at Channel 23”), the then-morning show for Univision flagship WLTV. The rest is Primer Impacto’s history.