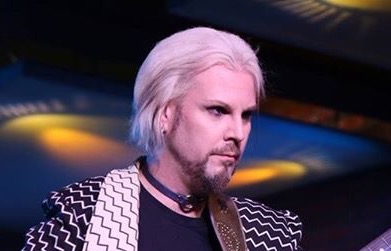 Trippy the Clown started the night off and got things going in a strange a trip direction. Looking like Part Chuckie and part hipster Muppet, Trippy introduced the first act of the night…John Flanigan.  Although the  keyboard sideman played a Nord Electro keyboard very well, John’s emotional ballads didn’t quite fit with the Heavy Metal throw down that was about to go down. John has a great voice but was shut down with a quick curtain after singing his hit,”Midnight Legend.” The last thing I heard him say before the unruly crowd started cheering was,”Im excited to be here tonight! It proves rock is not dead!”(Curtain)
Paulie Z from ZO2 was the MC and he made the obligatory announcements and handed out a bunch of free stuff from Monster Energy Drinks. Paulie was backed by the house band featuring Chuck Wright on bass (Quiet Riot) Matt Starr on drums (Mr. Big/ Ace Frehley) Ferlazzo on keyboards (Avril Lavigne) and Mitch Perry guitar master (Edgar Winter group). Paulie did a great job singing ‘“Dont Be Fooled Again” by the Who. Great sound. The bass was amazing. Guitar solo was over the top. The tune really set the mood for the night. Tunes from the 1980s were going to be brought out and rocked hard and loud.
The next song that was just over the top amazing was Damon Fox (Stormtrooper) on guitar and vox with the Okai Sisters from Japan. Mayuko on guitar and Tsuzumi on bass. They played “Communication Breakdown” by Led Zeppelin. People were yelling, ”Fuck yeah!” and “Louder!” As Paulie Z mentioned later on, Damon had on an amazing hat and should be given a lot of credit just for that. Somehow, I felt this unit captured the spirit of the evening.
The next group that seemed to catch everyones attention was 17 year old singing sensation Gabbie Rae. Gabbie has been singing since age 7 and sings many styles of music. She has a great voice and fit right in with her Batman themed outfit.
Paulie Z came out and announced musician after musician. There was Phil X (Bon Jovi/ The drills), Rafael Moreira (Paul Stanley/ American Idol/ Pink), Evan Seinfeld (Biohazard), Glen Sobel (Alice Cooper), The Iron Maidens, Tyra Juliet (Kid Rock), Lucky Lehrer and Greg Hetson (Circle Jerks), Dewey Bragg vox (Kill Devil Hill), Ira Black (Hellion/ Lizzy Borden), Debby Holiday, Derek Frank (Shania Twaine), Corey McCormick (Neil Young, Chris Cornel)and Chaun Horton (Chaka Khan, Raphael Sadiq).
But the main event of the evening. The king of the nights Heavy Metal guitar throw down was John 5 and The Creatures. John-5 on guitar (Rob Zombie/ Marylyn Manson), Ian Ross on bass and Rodger Carter on drums. John-5’s level of virtuosity is amazing. I don’t think he hit a sour note in one arpeggio. His white hair was flawless, his eyeliner in place and the Music was incredible. People were flipping out. It was an incredible set of stunt guitar.
Before the night ended, Anthony Biuso from TSOL got so many people to bring in food and warm clothing for Mama D Feeds the Homeless. Anthony spoke about how much the people on the streets need everyones help. For 23 years, people have been volunteering downtown at 5th and San Pedro. Every Sunday, they give out blankets and food. These are people that really have a need. Donations can be sent to FeedingAmerica.org.
As I was leaving the venue, I ran into local musician Steven Hall the drummer for Se7en4. Check them out on Facebook. They’re selling out the Whiskey these days and they LOVE Heavy Metal.
Im looking forward to Ultimate Jam 45. You just NEVER know who is going to stop by.