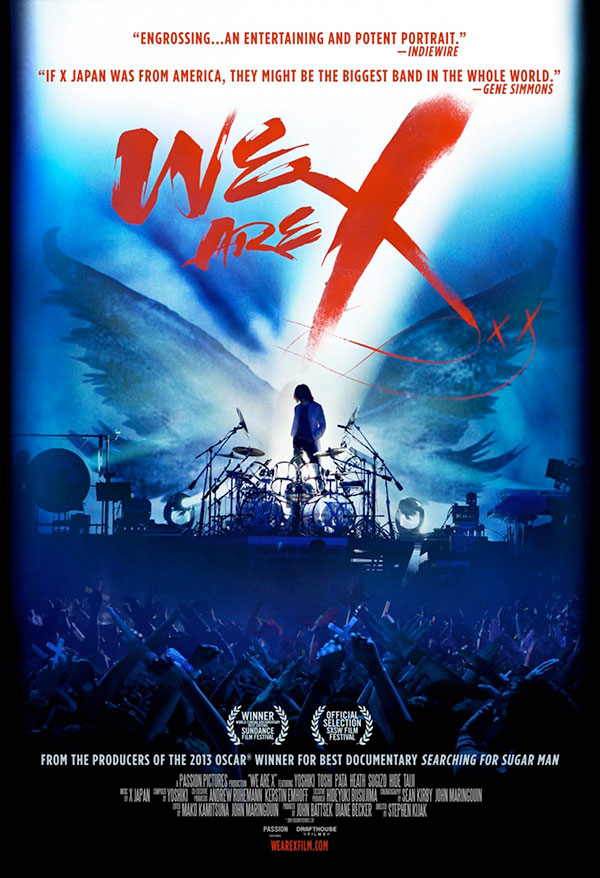 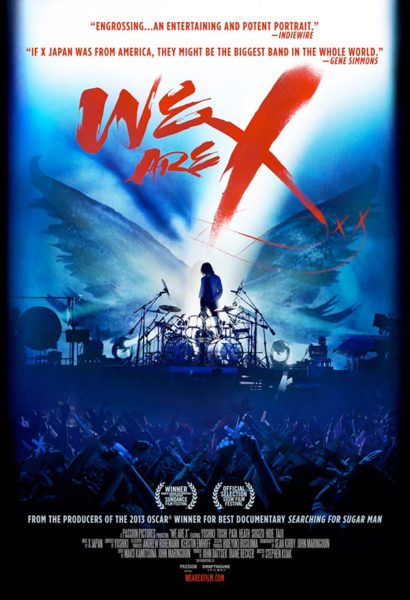 ‘We Are X’ is the documentary about the Japanese heavy metal band ‘X Japan” directed by Stephen Kijak who directed Backstreet Boys documentary film ‘Show ‘Em What You’re Made Of’ (2015).
Stephen had never heard of a band called X Japan before, he and the producer John Battsek were looking for something new after they made a documentary film ‘Jaco’ in 2015. They found X Japan. Stephen was fascinated by the slogan “Psychedelic Violence Crime of Visual Shock”.

X Japan is formed in 1982 by drummer Yoshiki and lead vocalist Toshi.
X Japan is one of the pioneers of ‘Visual Kei’ which is a Japanese music movement and subculture that has been popular since the 1980’s. The artists wear makeup, have elaborate hair styles and flamboyant costumes. X Japan has released five studio albums, six live albums and 21 singles, and has sold 30 million albums over three decades.

The majority of the X Japan music was written by Yoshiki, and because he learned classical piano, some of his music contain classic elements. X Japan music style is heavy, power, speed, symphonic, melodic metal.
I myself discovered this band when I lived in Japan (around 1990…), I remembered their fashion was really shocking!! It’s Harajyuku fashion!! Well, harajyuku fashion in 80’s was influenced by them a lot.

X Japan broke up in 1997, they pursued solo careers and other projects. In 2007 Yoshiki and Toshi worked together and X Japan reformed again.
In 2014, X Japan performed at Madison Square Garden in New York, and they are planning to release their new album in late 2016! They already have a tour schedule at Wembley Arena in London on March 4, 2017.

When I arrived at his recording studio, he was interviewed with Gene Simmons of KISS in a live room. After that, Yoshiki gave a studio tour. He has 2 recording rooms with SSL consoles. In the live room, there are his drum set, 3 grand pianos – one of them is his custom clear grand piano (very beautiful),  a unique custom KORG keyboard which lights up when you press any keys! And he has vintage synthesizers collection.

‘We Are X’ was premiered in the World Documentary Competition at the 2016 Sundance Film Festival, and it was awarded World Cinema Documentary Special Jury Award for Editing
Then it went on to play at SXSW where it won an Audience Award for Excellence in Title Design.

It will be theaters on October 21, 2016 in the US.
Advanced tickets to see at the Nuart Theatre in Los Angeles are now on sale!

We Are X Trailer: