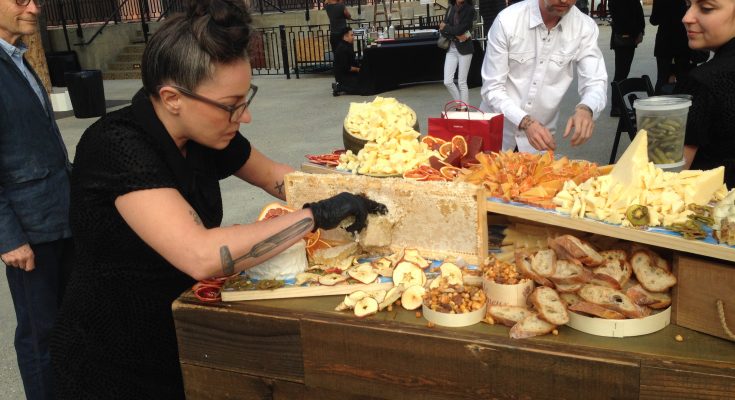 Los Angeles, CA — THE EXPERIENCE MAGAZINE attended the opening night of  The Los Angeles Times Food Bowl.
This is a premiere event that goes on the whole month of May and has everything the L.A foodie is looking for. Jonathan Gold gave out the best restaurant of the year to Taco Maria in Newport Beach and Mr. Gold said it is worth the 3 hour drive. The chef accepted the award but declined himself to be the best restaurant because he really said that there are so many great restaurants and chefs in L.A.
To start out we had a thai beer and headed to the cheese table which was set up really nicely with all the extras to start out the appetite.It was from DTLA Cheese from Grand Central Market. My fave dish was the Sahm Salad from Night and Market. The salad consisted of Shanghai bok choy, lots of fresh herbs, peanut brittle, a very tasty spicy thai vinaigrette, ranch dressing and crispy shallots. the dressing was made to perfection to bring out all the flavors of the salad. Things in a bowl was the theme for the launch party at Rossoblu, City Market South. The setting there was very spacious, there was a D.J and also some Taiko Japanese drumming.
The bar was serving artisan cocktails.

Chef Carlos Salgado of Taco Maria in Costa Mesa was given the Restaurant of the Year award. Curtis said it was all in good fun and “there really isn’t a “best” restaurant in Los Angeles. and he said there are so many good restaurants in LA. Jonathan Gold told the Experience Magazine that the three hour drive to Taco Maria in Costa Mesa was worth it just to try some of chef Carlos’ creations.

Mary Sue Milliken and Susan Feniger of Border Grill were on hand to  accept the Los Angeles Times Gold Award.The opening night event was a lot of fun and there were delicious plates for everyone to sample. 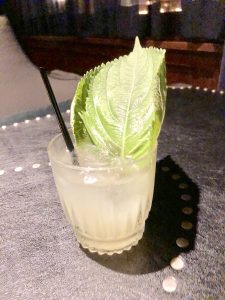 We Have Noodles featured a green noodle dish with broccolini, fried shallots and kale. This was the best veggie dish of the night. Chef Joe had prepared  a delicious fruit salad that popped. This dish had heirloom tomatoes, whipped ricotta, plum, a corn soubise sauce, quinoa for a little crunch and green strawberry. What a great combination of flavors.

Guests drank cocktails that were painstakingly prepared by hand at the bar.
THE EXPERIENCE MAGAZINE went to THINGS IN A BOWL for the third night of this great L.A Times event.
We took the scenic route down the p.c.h to Manhattan Beach passing by the famous Hyperion treatment plant. We went to Little Sister which is a couple of blocks from the pier as we will be walking that after our bowl there. We had the vietnamese chicken curry with bone in. I think that Jonathan Gold Would really like this dish. It had hints of lemongrass, new potatoes,and fresh herbs. It was served with a very fresh tasting baguette, sauces and sambal.
After going to the opening night party and another event at the Spare Room this was my fave bowl so far. It was very aromatic and the combination of herbs, vegetables, and chicken were put together in a perfect blend.Our host Ruva Ozbilen explaned the concept of the bowl. We recommend going to Little Sister and trying this great bowl!!
Little Sister
1131 Manhattan Ave, Manhattan Beach, 90266
310-5452096   www.littlesistermb.com
Check out the listing for future Food Bowl events here