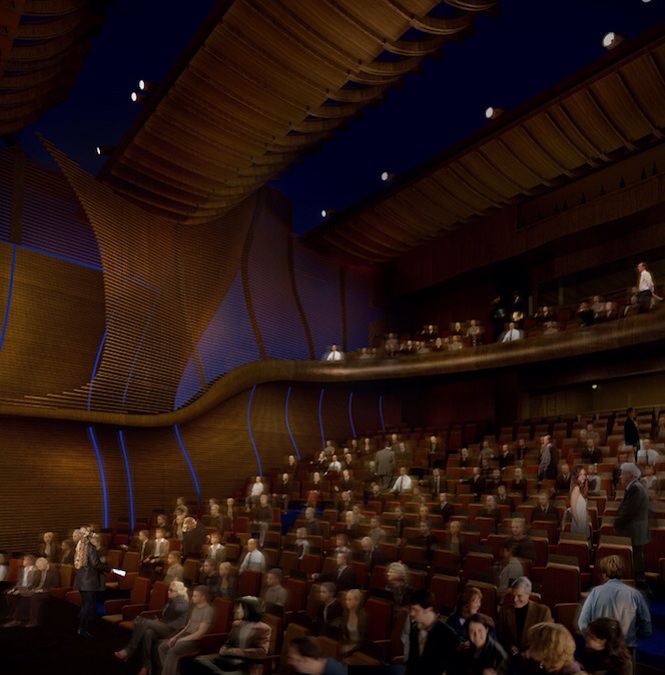 A NEW THEATRE IS BORN   As an important part of the Wallis Annenberg Center for the Performing Arts in Beverly Hills, the Bram Goldsmith Theatre has already shown its mettle with its production of Parfumerie, by Miklos Laszlo.  Set against a background of eminent Nazi take over of 1937 Budapest, the play works on a number of levels, allowing a comedic background to soften the effect of stress of the store owner and the constant bickering of the two lovers.  The thought never occurs to the play goer to allow his attention to wander.  The time of year happens to be two weeks before Christmas, which makes the show all the more poignant.   Augmenting what is on stage is a state of the art theatre with a great field of vision no matter where you happen to be sitting.  Everything seems to work as you let your eyes wander amidst what is happening around you. Looking in front of you is the wonderful set design of Allen Moyer which totally captures the look of the shop and every bit of detail seems to be captured to bring alive what is going on. Becoming more immersed in the goings on, my mind kept going back to a similar PBS production this year,Mr Selfridge,  a return to an earlier time and also a sort of retail Ship of Fools albeit on a larger scale.  Both have wonderous sets and costume design and present a train of thought which permeates. In this production, Richard Schiff as the shop ownerMiklos Hammerschmidt centralizes all the action and is most convincing as he tried to come to grips of all that is going on around him.  Deborah Ann Woll and Eddie Kaye Thomas, as Amalia and George, the two displaced and unaware lovers, carry their association forward with incisiveness and aplomb with razor sharp precision. Rounding out the cast, Matt Walton, as the ridiculous and misguided Steven Kadar and Arye Gross emanating the sycophantic Mr. Sipos have important and precise roles in supporting the action as it all comes to an unforgettable conclusion as all Additionally, what should not be overlooked is an exhibition called Timeless Scents: 1370-2014. A History of Iconic Frgrances which is adjunct to the theatre.  It will be well worth your time. The production runs thru December 22 at 8, Sat. 3 and 8 and Sun. 2 and 7. Contact:  310.746.4000  or  www.thewallis.org. BOB TINSLEY eeworldnews.com