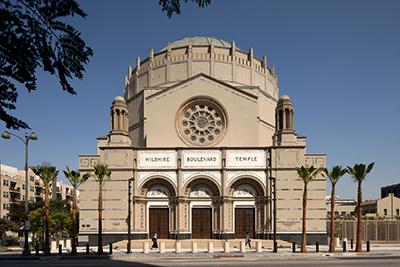 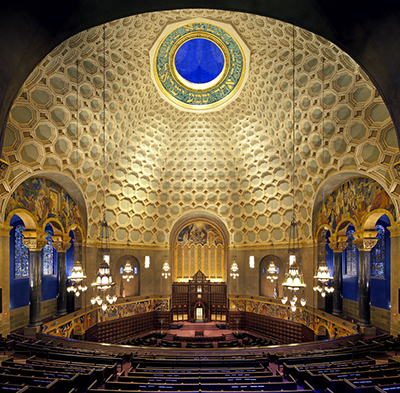 Los Angeles, November 22, 2013 – Wilshire Boulevard Temple will present an unforgettable evening with the world-renowned Los Angeles Philharmonic in the Temple’s newly restored historic sanctuary. Now in its 94th year, the orchestra has a long history of presenting concerts in its diverse community, embracing schools, churches and neighborhood centers. The Temple, a fixture of Wilshire Boulevard since 1929 and listed on the National Register of Historic Places, has restored its magnificent sanctuary with the intention of making it a public space for community-wide cultural programming.

The fundraising event, open to the public, with ticket prices ranging from $50 to $150, will benefit the Temple’s Arts and Culture Fund. This is a unique opportunity to experience the world-class orchestra performing Beethoven, Tchaikovsky and Dvorak in the breathtakingly beautiful sanctuary of the landmark synagogue, newly re-dedicated in September 2013.

The evening’s program (subject to change):

Music has been a hallmark of worship services at Wilshire Boulevard Temple since its inception and is rooted in ancient tradition. “For more than seven centuries the Ancient Temple in Jerusalem was home to an orchestra of 36 trained musicians! We carry on this tradition by welcoming our beloved LA Phil to our glorious home,” says Cantor Don Gurney, the head of the Temple’s liturgical musical program, who is spearheading the LA Phil’s return. “Now, outstanding secular music and other cultural programming will also be a regular offering to our neighbors and the extended Los Angeles community.”;

The oldest Jewish congregation in Los Angeles, founded in 1862 as Congregation B’nai B’rith, Wilshire Boulevard Temple is a Reform congregation of 2300 families. The Temple building, located at 3663 Wilshire Boulevard in the diverse and stylish Koreatown/Wilshire Center, dates from 1929 and sits on a 3.9-acre site between Hobart and Harvard Boulevards, recently named the Erika J. Glazer Family Campus.

After undergoing a two-year renovation by prominent L.A. architect Brenda Levin, FAIA, the domed, Byzantine-style sanctuary has been restored to its 1929 glory. The majestic circular room, with a diameter of 100 feet and a ceiling height of 110 feet, seats 1,700. The sanctuary is encircled by a 320-foot mural depicting scenes of Biblical and Jewish history, painted by the artist Hugo Ballin, who was a distinguished set designer at Warner Bros. Studios; the work was commissioned in 1928 by three of the Warner brothers.

The Temple offers education and worship services at the Glazer Campus on Wilshire Boulevard and at its Westside location, the Audrey and Sydney Irmas Campus, at Olympic Boulevard and Barrington Avenue.

In addition, both campuses feature Early Childhood Centers (Baby and Me classes and Nursery School), Brawerman Elementary School, and Religious School, as well as cultural and educational programming for adults. The Temple also operates Camp Hess Kramer and Gindling Hilltop Camp and the Steve Breuer Conference Center in Malibu.

The next phase of development at the Glazer Campus includes the renovation of two school buildings and the construction of a multipurpose building along Sixth Street to house a large social service center to serve the neighboring community, rooftop sports facilities, and parking for about 500 cars. Groundbreaking is set for Summer 2014.