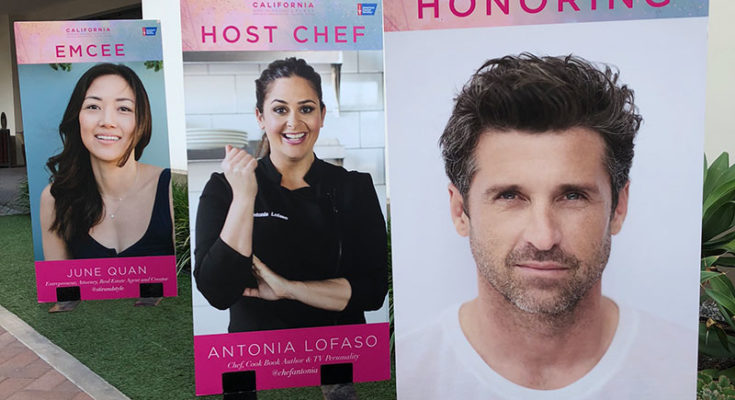 Dempsey founded The Dempsey Center in Lewiston, Maine in 2008 intending to give back to the community where he grew up, and where his mother Amanda first received treatment for ovarian cancer in 1997. Dempsey continues to support the fight against cancer in a variety of important ways.

The Host Chef for Cal Spirit 34 is Antonia Lofaso, Chef, TV Personality, Cookbook Author and is the Executive Chef and Owner of Black Market Liquor Bar (Studio City, CA), Scopa Italian Roots (Venice, CA), and her newest concept DAMA (Downtown Los Angeles, CA). Lofaso has a personal tie to cancer sharing “My dad, Fred Lofaso, is a two-time cancer survivor. Like many others affected by the disease, it didn’t hit home until I was directly affected,” said Chef Lofaso. “I chose to stay positive through such a challenging time and continue to help in any way I can for others. Cancer is affecting too many people, and something needs to be done to help find cures. With my own father’s experiences, I gladly support the research needed to provide help and bring awareness to the disease.”

Honorary chairs for Cal Spirit 34 were Sherry Lansing and Phil Rosenthal. Lansing is the former CEO of Paramount Pictures who broke glass ceilings as the first woman to head a Hollywood movie studio; prior to Paramount she was the president of production at 20th Century Fox. Lansing founded California Spirit in 1984 as her way to give back after her mother passed away from ovarian cancer. She has remained committed to the event throughout its 34-year history. Rosenthal is a 15-time Emmy Award-winning creator and writer for “Everyone Loves Raymond,” “Spanglish,” and “I’ll have What Phil’s Having”. He currently is starring in “Somebody Feed Phil” on Netflix.

The American Cancer Society’s California Spirit benefit has raised $16 million in the last 33 years to support our mission to save lives, celebrate lives, and lead the fight for a world without cancer.

To help the American Cancer Society save lives and attack cancer from every angle, donate by visiting www.calspirit.org or text “CAL” to 91999.  For cancer information, visit cancer.org or call 1.800.227.2345 anytime.