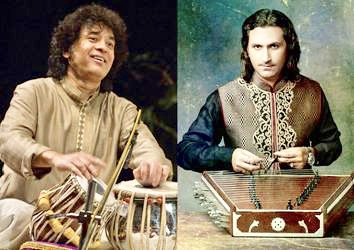 Los Angeles , CA – April 29, 2017 – World-famous master musicians Zakir Hussain and Rahul Sharma performed a brilliant concert of Indian music at Royce Hall on Saturday, April 29th. Falling on the birthday of Zakir’s revered late father, Allarakha, the concert was a tribute with a half-hour tabla solo by Zakir that was quite special.

The celebrated duo’s concert was a day before International Jazz Day on April 30, which has featured performances by Zakir at an all-star global concert in Washington, DC (2015), Istanbul (2013) and New York (2012). In January, SFJAZZ honored Hussain with a Lifetime Achievement Award, recognizing him as an international phenomenon in the field of percussion and as one of the world’s most esteemed and influential musicians, widely considered a chief architect of the world music movement.

Erwin Glaub from the Experience Magazine was on hand for the concert. Erwin said: Zakir Hussain is probably the best tabla player in the world and the story told by Rahul Sharma about his instrument being put on the back burner was very interesting. He learned from his father, the instrument has 124 strings. It was a delight to listen to all the different rhythms that you would not hear in western music. This was a very complex performance but at the same time you can tell there is improvisation.

Hussain’s expressive tabla drumming matched with Sharma’s virtuosic command of the santoor made for a stunning combination of improvisational talent. Renowned for pioneering the use of their respective instruments in contemporary formats, they are known for encouraging musical projects across cultural boundaries.