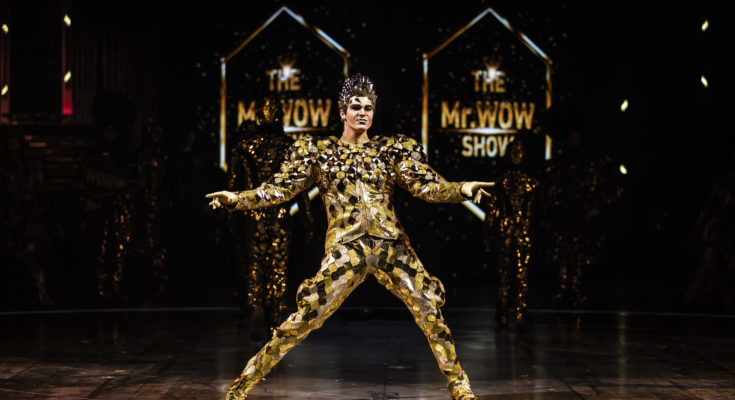 (EXPERIENCE MAGAZINE) — LOS ANGELES, CA — (JAN 28, 2020) — The art core gymnastics Big Top is back at Dodger Stadium for Cirque du Soleil’s Volta. What an amazing evening of BMX bikes, trampoline tricks, and so many gymnastic feats, you wouldn’t even believe it unless you saw it with your own eyes. Cirque du Soleil manages to transform Frank McCourt’s, parking lot at Dodger Stadium into a super posh VIP hang with all sorts of places to check out and take Instagramable pictures.

I’ve learned from Cirque du Soleil about what these shows are about. Like a Bob Dylan song, these shows are about one thing but could be about something else. It depends what the viewer thinks. Volta has a story about a little boy with blue feathers for hair. His world is lived in imagination, on a giant TV screen and finally, through death defying acrobatics that make you genuinely concerned for their safety. There is also an element in the show about Mr. Wow. This character had some incredible coustumes and did some of the funny comedy routines where you cant quite make out what language he’s speaking, but it sure is funny.

Right off the bat, the Acro Lamp routine scared the crap out of me. This guy doesn’t seem to have a harness on and he goes up 35 feet in the air and does spins, swings and generally hangs off this lamp while it is way up near the ceiling!

The Shape Diving routine features a group of acrobats who have the ability to run and tumble through impossible shapes. The acrobats really got the crowd going. Sometimes repeating a difficult trick until they achieved it.
The BMX riders, how the heck do they do this? There were ramps everywhere. There was a plexi glass wall suspended from the ceiling. The crowd roared with approval. This routine really struck a nerve with the packed house.
The Blue Haired Boy comes back to do a duo with a ballet dancer while he’s on a BMX bike. This routine featured really cool choreography.

The Acrobatic Ladder kept me on the edge of my seat. Two acrobats on an articulated ladder. The crowd loved it, but it made me nervous! Im so glad everyone was OK by the end of the night! The final presentation that reaally rocked the crowd was the hair suspention routine. A Cirque du Sloeil celebrity, Danila Bim does the hair hang with such ease, its hard to tell that she is to acrobatics while suspeneded from her hair! Its really just a huge crowd pleaser.
The entire cast came out at the very end. The crowd was on their feet and really just loved every bit of it. This is such a good Cirque Du Sloeil to check out. If you haven’t bee, you MUST go! If you’ve been to Cirque du Soleil before, you dont want to miss this one!