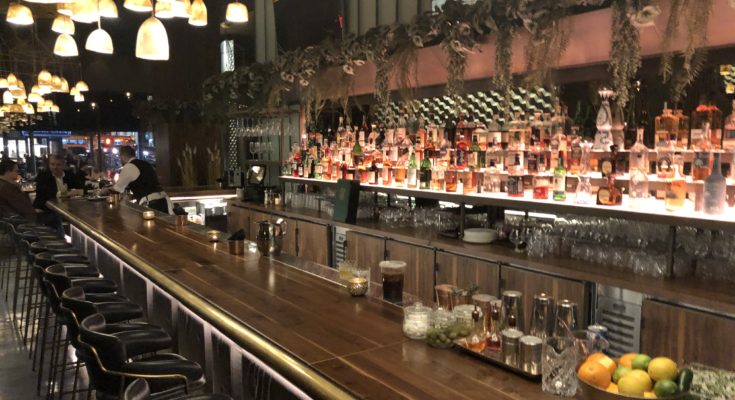 (EXPERIENCE MAGAZINE) — DineLA — Downtown Los Angeles, CA — The Experience Magazine stopped by the stylish Le Grand Restaurant for dineLA on January 31st. Le Grand has a stylish location in downtown Los Angeles. They created a  great prix-fixe menu for $59.00 for dineLA 2020. The Executive Chef is Edgar DelaRosa. The dineLA menu was curated by Chef Edgar, Tamaz and Tamaz’ brother George. The wine parings, as well were curated by George. The cuisine is globally inspired coastal cuisine, which is influenced by coasts from around the world, including European, Californian, Greek and Mediterranean.   Our server, was great at recommending pairings for the dineLA menu. And we got to try one of the craft cocktails that Le grand is well known for. For wine, we went with a California Pinot Noir. It was a 2017 Trinity Oaks. It paired perfectly with dinner. We really wanted to try everything on the dineLA menu, and we pretty much did just that. For cocktails, I had the bartender make an old timey Whiskey Sour with egg whites and it was so delicious. The bartender nailed it with this cocktail.

For Appetizers, we started with the Tuna Tartare. Expertly blending sushi grade tuna with apple, celery, avocado and lime. The ingredients were all so fresh and the dish was delicious. A great start to our meal. We tried the Beet Salad. Wow! These beets were popping with flavor. There was a bit of goat cheese, some pistachio and tiny bits of pear. This salad was full of flavor. 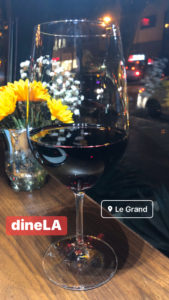 The owners of Le Grand are from Georgia near Russia. Tamazi Gomiashvili and sons George and Tamaz are the Gomiashvili family. Le Grand is their first restaurant in the States. They own restaurants in Russia, France and Bulgaria. Le Grand is becoming a go to spot for dining or going on a date. The atmosphere is very cool and modern. There’s a lot of room to dine. I saw families getting together and young people Instagramming their oysters. Le Grand has a great atmosphere. Le Grand features California Cuisine with a wide selection of seafood. There are Mediterranean and Greek touches to the dishes. 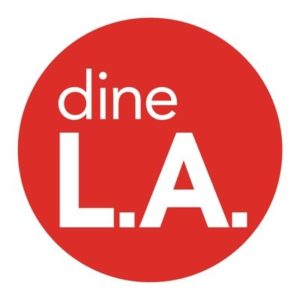 Our server told us that his favorite dish is the Fettuccine. We had the chef make up a vegetarian plate of Fettuccine. It was so good! The noodles in this dish! I couldn’t believe it! The noodles tasted delicious. I’m used to eating regular fettuccine noodles with marinara and parmesan, but these noodles were really tasty. I was really surprised. You HAVE to try the Fettuccine at Le Grand. This was the best Fettuccine dish that I tried for dineLA Winter 2020.

We also tried the Jidori Chicken Breast. Delicious housemade polenta with fresh maitake mushrooms and Brussel Sprout leaves. This dish was tops as well. The flavors all came together to make a symphony in your mouth. The Brussel Sprout leaves is a nice touch bees its crunchy without being too filling. The Trout was full of flavor. They made a squid ink pasta (I love squid ink pasta. It looks so cool! Its black!) they had some Prince Edward Mussels, and clams from New Zealand. The Trout is top notch. You must try it if you’re a fish lover.

When dessert came, I was so full! I just had to have something sweet. We settled on the Panna Cotta. This dessert has a sweetened cream with tiny bits of mango, coconut and lime. Again, I was blown away buy the subtle flavors and the housemade quality.

DineLA 2020 was such a great success with the Los Angeles Board of Tourism and American Express connecting so many foodies, chefs, owners and servers for a world famous food event. Stop by Le Grand to sample their full menu!