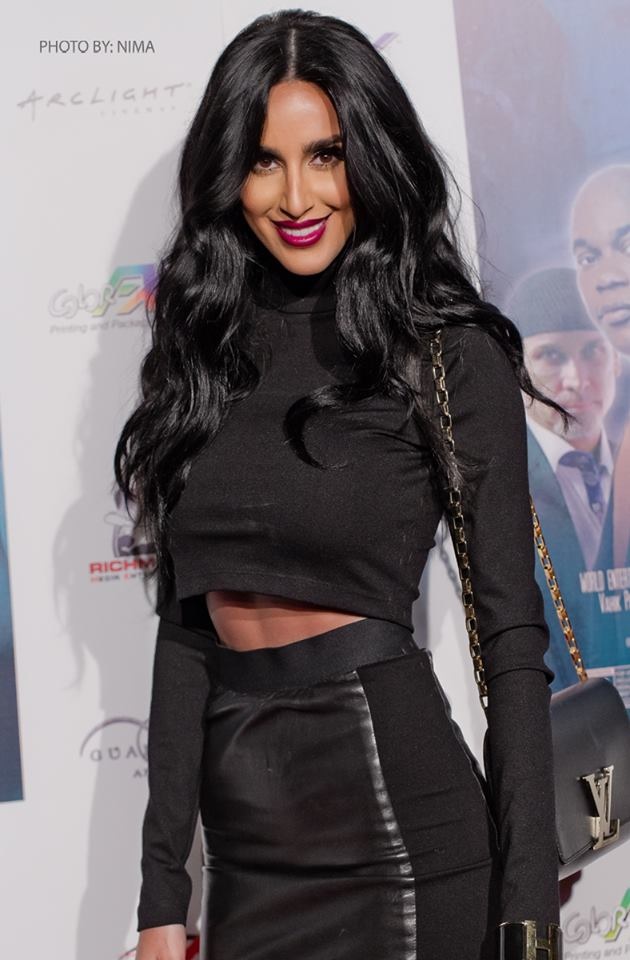 I had the distinct pleasure of covering the Guardian Angel premiere at the renowned Arclight Cinemas in Hollywood. It was truly an honor to interview internationally acclaimed singer-songwriters Andy Madadian and Shani Rigsbee a number of times before, so it was really nice to interview them and my friend, talented actor Anthony Azizi again.
Vahik Pirhamzei’s brooding, kick-ass on-screen performance in Guardian Angel makes him primed and ready to be the next Liam Neeson. That’s what many guests were buzzing about after the big premiere of this gripping film. The suspense-thriller Guardian Angel is set to open in theaters in Los Angeles and throughout California starting on October 17, 2014. The award-winning film stars Bokeem Woodbine (Riddick, Total Recall), Justine Wachsberger (Divergent), Houshang Touzie (Argo, Homeland), Vahik Pirhamzei (My Uncle Rafael), Colin Cunningham (Falling Skies), Christopher Atkins (A Horse for Summer, The Blue Lagoon), Anthony Azizi (Septembers of Shiraz, Sons of Anarchy), Andy Madadian (Shirin in Love, House of Sand and Fog), Shani Rigsbee (Shirin in Love, House of Sand and Fog), and Ray Wise (Jeepers Creepers) to name a few.
Written and directed by Pirhamzei himself, a popular Iranian-American playwright, award-winning screenwriter, and accomplished actor-director, the film truly captures the dangerous criminal underworld of human trafficking and organized crime in Los Angeles.
Guardian Angel follows a veteran security specialist Ray (Pirhamzei), who, after the tragic death of his wife, must protect the daughter (Wachsberger) of a businessman who embezzled millions from a crime boss (Cunningham) in Los Angeles. Uncovering more than he bargained for, Ray must risk his own life to protect and save the lives of two innocent women.
“I am so happy to be a part of this wonderful international cast,” said Touzie. “Alot of young Iranian filmmakers are making great films like Vahik,” he added.
“I did Tequila Express with Chris (Atkins) and it was the most ridiculous movie ever (please put that I just said that in print), but I still enjoyed working with him. I really enjoyed working with Vahik too. It’s truly been a family affair to work on this film. When I went for the casting meeting, he had a whole spread for me…cholo kebab, donuts and coffee…the works! He even had vodka and was like, ‘you want a drink? Please have a drink.’ In all my years as an actor, this has never happened,” said Azizi.
“I was invited by my talented friends Andy and Shani and I wanted to come show my support as they are so special to me,” said Access Hollywood anchor and correspondent Shaun Robinson.
“This movie was very fun to do as it involved the Hollywood, Persian and Armenian-based communities. Vahik was a great writer-director-star to work with. He called me and asked me to read the script and I knew he was onto something really special. I gladly wore a few hats and was happy to be a part of the production team,” said Rigsbee, who like her husband, Madadian, is an international pop star as well.
“”I’m so proud of Vahik. He’s he first Iranian-American action star,” said international pop star Andy Madadian. “Vahik started in the business, initially in plays for the Iranian community and is such a talented guy.” As for his current and future projects, he said, ”Shani wrote the theme song for “Far and Away” that we both sang as a duet. It aired today and we are very proud of it. I’ll be touring in November and will have a new single out.”
“All the hard work, time, energy, money and effort makes me really enjoy this moment,” said a very humble Pirhamzei. “I started acting in Iran. Many Iranian-American actors started out doing plays when they immigrated to LA as it was much costlier to make films, especially back then. We had legendary actors like Parviz Sayyad doing plays. Acting in plays was a great bridge to TV, which was a great bridge to acting on the big screen,” he added.
Richmond Media (RME) is a Los Angeles based, multifaceted entertainment company that develops, produces, and promotes films and stage plays for unique and wide audiences alike and is distributing this film. Teaming up with LA-based marketing and servicing company, Lore d’Morrow Entertainment (LME) for the release, RME has partnered with indie marketer and filmmaker, Marc Fusco, to bring the film to the big and small screens.
“It’s a great pleasure to work with one of our most talented indie filmmakers, Vahik Pirhamzei, who ups the ante each time he creates a new work whether it’s on screen or on stage,” said LME’s Fusco. “After repeatedly witnessing the film keep its audience members at the edge of their seat, we’re excited to join Richmond Media to bring Guardian Angel to the masses.”
With a platform release, RME is building a targeted marketing campaign to expand the film’s reach into the mainstream domestic market. The film will open in Los Angeles on several screens and then expand from there.
“Seeing the interest Guardian Angel garnered at the Cannes Film Market this year, I know audiences will be pulled into the story quickly and have a great ride,” says ‘Angel’ worldwide sales agent Tyler Konney of Taylor & Dodge.
More info about the film at http://guardianangelmovie.com/
The film’s trailer:

Shani and Andy’s moving song, Far and Away, the official music video from the motion picture, Guardian Angel: