Now that the Theatre 40 in Beverly Hills is about to get into their 48th season, you could not find a more appropriate vehicle to set the stage.

Norm Foster’s ‘Opening Night’ is certainly to provide the impetus for this auspicious moment.  With an ideal cast and some really laugh provoking dialogue, well , what more can you ask for?  I’m trying to think of a playwright who can come up with such insight into the foibles of back stage humor but it is not easy.

No profound messages to put forth here, just jabs of intentional and unintentional dialogue between characters who find themselves ill placed and their attempts to get themselves out of their respective situations.

The main thrust comes from the director crustily acted by Martin Thompson who attempts to put together a completely inept play on opening night amid all the antics of those at hand who find themselves involved in this rapidly decomposing fiasco.  In addition, you have the couple attending this who haven’t a clue as to what play going is all about portrayed by the husband, John Combs, a real dork if there ever was one who resents being taken away from his baseball game and his wife, Gail Johnston, trying to rationalize his idiocy.  Let us not forget also the girl friend of the director, the very fetching Meranda Walden who provides more than enough scenery to keep the pulses jumping.  Richard Hoyt Miller could not have been better cast as an out of work actor hanging around back stage bugging the director to give him whatever crumbs he can get thrown in his direction.

All the rest of the cast do a superlative job providing a background to all this.

Bruce Gray did the directing for this piece and according to my notes has been directing for the theatre since 1982, being a resident director here.  It’s clear he has given Foster full reign as to how he wants to let the production play out.

The sets by Jeff Black are a bit awkward at times but pulling out the background to go from backstage to front gets the job done adequately.

All in all quite a merry experience and enjoyable to be a part of.

Theatre 40 is at 241 S. Moreno Drive, behind the Beverly Hills High School.

It runs Thursday thru Saturday at 8 and Sundays at 2 thru June 16. 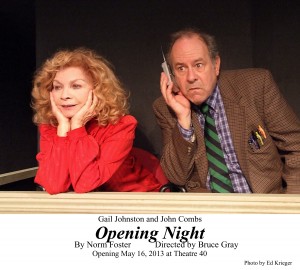