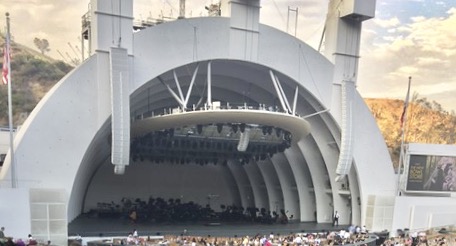 HOLLYWOOD, CA – I have always loved classical music; in fact, my favorite radio station is Classical KUSC. I listen to it when I drive, read, or write on my blog. Of course, when I clean my house, I still listen to Selena or Juan Gabriel. Come on, I am Mexican!
This week, I went to the Hollywood Bowl to see Joshua Bell with the LA Phil conducted by Bramwell Tovey. If you have never been to the Hollywood Bowl you are missing an amazing experience. The Hollywood Bowl is an open-air venue that sits nearly 18,000 people. It has restaurants, bars, shops and even a museum. The best part of it is that you can bring your own food and drinks, which makes it more affordable for the general public. The tickets for this specific show ranged from $8 to $116 a person. So as you can see, The Bowl also accommodates all budgets. 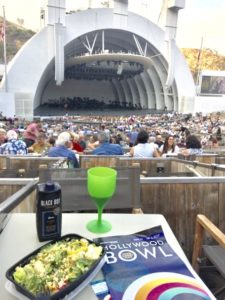 I was first introduced to Joshua Bell on Amazon’s TV show “Mozart in the Jungle”, where I immediately fell in love with his talent and passionate way of playing the violin. It also doesn’t hurt that he’s a very attractive man. So when I found out he was coming to Los Angeles, I knew I needed to see him play live.

The concert started at 8pm with a warming welcome from the charming British conductor Bramwell Tovey, who even joked about his name, “I can’t believe you clapped after hearing my name, I told my parents I didn’t like my name”. He then introduced Stravinsky’s “Fireworks” and explained why this was a very important piece since it showed the author’s voice; hence, catching the attention of the impresario Serge Diaghilev, who played a key role in Stravinsky’s career.
Tovey by mistake mentioned Tchaikovsky “ I meant to say Stravinsky, I get confused with these Russian names. In these days I need to be careful with the Russian information I have”, he said jokingly.
Next we heard Lalo’s “Symphonie espagnole” which was the first concert Joshua Bell learned. There is actually a beautiful book called “The Dance of the Violin” which recalls the 12-year-old Bell making a mistake at the Stulberg International String competition and the unexpected outcome, which transpired when he was given a second chance. The book was written by Kathy Stinson and illustrated by Dušan Petričić.
I am not a music expert, I was just part of the audience, but every time Bell played the violin he gave me the chills. He played with such passion that it was contagious. I loved being in an open-air venue, drinking a glass of cheap Merlot and listening to the orchestra in the hot weather. (Tovey of course joked about it). 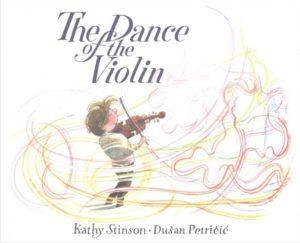 The night ended with Stravinsky’s “Pretushka”. Toveyintroduced the performance by telling us the ballet’s plot in a very amusing way, “At the end of this fight Petrushka is killed but he is a puppet so that’s rather weird”. He told us we could identify the moment when Petrushka dies whenthe principal percussionist Matthew Howard drops the tambourine. He warned us it was not a mistake, “I don’t want you to think that he [Howard] screwed up on his first gig”, the audience laughed and clapped.
My night got even better when I found out Bell was signing autographs if you purchased his CD or book.

Bell was very kind to everyone, even with the old lady and her dog who licked Bell’s face while they were taking a picture with him. When it was my turn, I told him I rather have a picture with his $4 million Gibson ex-Huberman Stradivarius, which made him laugh a lot. Between you and me, I was not kidding. His violin was made in 1713 and has been stolen twice! Bell and I talked a little about Mexico, “Mozart in the Jungle”, and about my name. He made sure to spell it with a double “S”. I bet he was so tired after playing out his soul at the concert, but that didn’t stop him to make us feel special. He was grateful we were there. I couldn’t interview him for my Youtube channel whatthehelldidshesay, but I know one day I will. In the meantime I am grateful for an unforgettable night on a hot day in August… 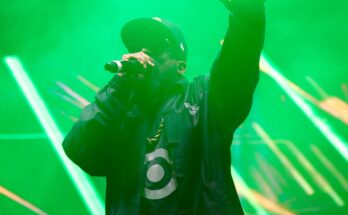