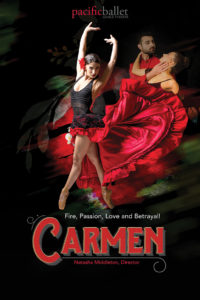 The performance on Sunday at the Janet and Ray Scherr Forum Theatre at the Thousand Oaks Civic Arts Plaza was sold out. So many people who love dance came to experience a full length ballet. The lifts and poses of the dance troupe were smooth and graceful. The men seemed to toss the ballerinas into the air with ease. The recorded sound track by Rodion Shehedrin sounded great with all of Bizet’s iconic melodies played and timed perfectly.
Elen Harutyunyan relished in the part as Carmen. She has the beautiful body of a professional ballerina and the ability to convey the story through dance. Her performance was vibrant as she tempted and seduced the many men in Carmen’s life. Her professional level of dance was obvious and Natasha Middleton’s choreography worked well with Elen’s dance style. Grigori Arakelyan played the love smitten Don José. Grigori did such a good job and was graceful in his moves. Preston Swovelin was the dashing Toréador Escamillo.

Costume designer, Ann Lindsey, did such a great job on all of the costumes. I really thought the Toréador costumes were just amazing. Damara Titmus played the ever faithful Micaëla.  Alexander Fost played the gypsy Remendado. There were, of course, many gypsies and they add a mysterious element to the production. Ricardo Jony did a great job as Zuniga, Lieutenant of the Dragoons. Again, this costume was just stunning. Part military uniform, part dance outfit. The epaulettes on Zuniga’s costume sparkled and were iconic from the back row.

I was really impressed with Rodion Shehdrin’s string and percussion arrangement’s of Bizet’s musical score. It sounded great on the sound system at the Scherr Forum Theatre. Georges Bizet’s sweeping musical score from his opera, Carmen, sounded well balanced and full of drama. I immediately recognized the melodies from the Habañera,  the Seguidilla, and the Toréador Song.

Carmen is the story of a wild gypsy girl who lives in Seville, Spain. It is a “hooker with a heart of gold” story that’s been told over and over since Bizet created it in 1875. Carmen lives for sensuality and passion. She gets into a fight with a co-worker while they are at work making cigars. Don José shows up to arrest her but is easily seduced by Carmen. Don José gets locked up for a month for letting her go. When he gets out of jail, he finds that Carmen has hooked up with Lieutenant Zuniga.

There’s an epic fight over Carmen. Don José leaves his childhood sweetheart, Micaëla, and joins up with Carmen’s gypsy gang which includes Frasquita and Mercédès. Carmen’s friends read their fortunes in cards. The news is bad, and the cards predict Carmen’s downfall. Carmen loses interest in  Don José and hooks up with a matador in Seville named Escamillo. Don José is hopelessly in love with Carmen and goes to Seville to confront Escamillo. The costumes were just stunning as the ballet came to a close, pulling out all the stops. Natasha Middleton’s choreography was just amazing. She utilized the theatre space well. In the end, Carmen refuses to go back with  Don José. Don José stabs Carmen to death with a dagger. He is then dumbfounded by what he did, but alas, Carmen has met her demise.
This was such a great night for regional dance theatre. It’s such a treat to watch the dancing, the costumes and the music. We look forward to covering more events from the Pacific Ballet Dance Theatre.